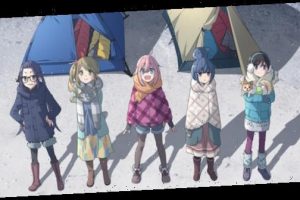 (Welcome to Ani-time Ani-where, a regular column dedicated to helping the uninitiated understand and appreciate the world of anime.)

It turns out 2020 is refusing to go, because the start of 2021 has been a bit of a mess. That being said, one of the beauties of the anime medium is how easily it can take you on a journey and immerse you in an entirely different world. Whether it’s a fantasy world where humanity hides behind useless walls and are hunted by man-eating Titans, or a sci-fi world where 14-year-olds get inside giant robots to fight against giant monsters, there is something for everyone — even those who simply want a good and heartwarming anime about the joys of camping.

We haven’t really covered that many slice-of-life shows in this column before, but that’s changing now, because we all could use a little escapism. Forget about giant mecha and superheroes, it’s time to grab your tent and sleeping bag, and set out to enjoy the marvelous landscapes of Japan in Laid-Back Camp.

This show does for camping in Japan’s outdoors what Lord of the Rings did for trekking through New Zealand. The show focuses on high-schooler Rin Shima, an introverted girl who loves to go camping alone, and the friendship that grows when she meets Nadeshiko Kagamihara, an energetic girl who joins an Outdoor Activities Club after discovering camping as a hobby. From there, the show doesn’t really evolve – it continues to do exactly what you think it’s going to do. It takes you on a journey to exciting new locations, teaches you a bit about camping, and makes you feel warm and cozy all-around.

What Makes It Great

A show about going camping outside may not require the kind of flashy animation an action show like Demon Slayer does, but that doesn’t mean Laid-Back Camp doesn’t boast beautiful backgrounds. Much of the first season takes place around Mt. Fuji, but C-Station studio finds new and enchanting ways to portray the outdoors with each episode and it never feels tired. The show may not look as realistic as the works of Pixar or Makoto Shinkai, but there’s enough realism to make you want to visit the real thing.

But it doesn’t stop with backgrounds. Laid-Back Camp pays just as much attention to the backgrounds as it does to carefully detailing camping equipment, roads, character expressions, and food. This is not a cooking anime by any means, but it will make you as weirdly hungry as watching Hannibal, and the details in the steam emanating from noodle cups are enough to make you feel warm in a cruel winter.

Some people may take issues with the show’s slow pacing, but the very intentional laid-back attitude of the show is enough to sell you on the idea of camping. Confession time: I’ve never been a fan of camping, at least in part due to The Blair Witch Project. But Laid-Back Camp‘s visuals, and it’s atmospheric and whistle-infused soundtrack, perfectly illustrate the peaceful feel of quiet lakeside camping. The show uses silence and stillness to its complete advantage, slowing down the world to let you enjoy the quiet charms of nature, taking its sweet time to showcase the process of setting up a tent, starting a campfire, and simply waiting until the curry ramen is done.

What It Adds to the Conversation

The visual aesthetic and laid-back tone of Laid-Back Camp may adhere to the same look that K-On turned into the standard for “moe” shows, but the show stands out by making sure the focus is always on the camping and the friendship between the main characters. Back when the show was first airing, Cecilia D’Anastasio wrote for Kotaku about how Laid-Back Camp and A Place Further Than the Universe (which we already praised in this column) present a unique portrayal of female friendships in anime. Friendships that are low-key, and focused on a shared love of hobbies, rather than being members of an elite unit of warriors, or being connected through a man.

The friendship in Laid-Back Camp is all about how these girls genuinely enjoy each other’s company, as seen when their group chat becomes bigger and bigger. A major way in which the show portrays this friendship is through texting. This show has one of the best portrayals of texting in TV or film, with a realistic change in the tone of the texts as the girls become closer. This is not a mockery about how young people are obsessed with their phones, but a genuine portrayal of how texting has become a sort of secondary (or at times primary) means of communication for the characters’ age group.

The show’s secret weapon, however, is that it never makes Rin’s introverted nature into a negative. On the contrary, the show places just as big a focus on Rin enjoying her solo camping trips as it does on Nadeshiko’s story of befriending the Outdoor Activities Club. Any other show would make Rin’s story one of learning that her ways are wrong and that she should just go with the group, but that’s not Laid-Back Camp. Even as she starts opening up to the idea that camping with others could be fun, she still takes solo trips because she enjoys them. The show really wants you to know that it is equally valid to keep a hobby to yourself as it is to share it with others, it’s just a different kind of experience.

Why Non-Anime Fans Should Check It Out

If you feel like life is getting too hectic, or simply need a break from plot-heavy shows, Laid-Back Back‘s slow and meditative pace is the perfect break from the outside world by experiencing an animated outside world. Its characters are relatable and distinct, it’s got a great sense of humor, and its soundtrack is like listening to a relaxing lo-fi playlist. If there’s one anime that can get us through this winter, it’s Laid-Back Camp.

Watch This If You Like: A Place Further Than the Universe, Paddington, Ted Lasso

Laid-Back Camp is streaming on Crunchyroll.