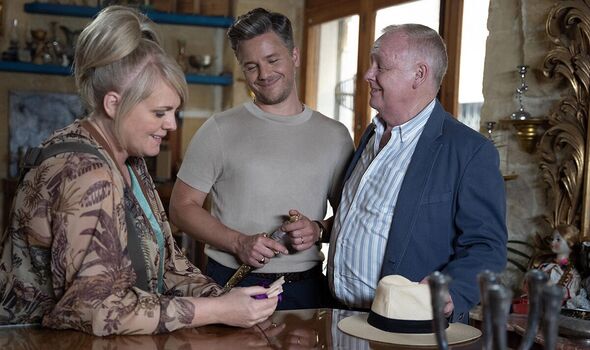 The Madame Blanc Mysteries airs on Channel 5 on Thursdays and the new instalment follows fellow antique dealer, David (played by Les Dennis) and his new husband, George (David Ames). They are on their honeymoon but all is not going well for the happy couple. Actor Les opened up about working with his old friend Sally Lindsay on the murder mystery series.

However, they seem to have someone on their trail who plans on making it a very short trip.

Before they left England a mirror fell from the wall, narrowly missing David.

When they arrive in Sainte Victoire, one of their bags has been cut.

Jean (Sally Lindsay) then makes it her mission to find out what is happening.

Actor Les opened up about being reunited with his close friend Sally on the series.

He said: “It was so lovely to work with Sally again. We did a tour called Eurobeat, all about Eurovision, a few years ago now and we did nothing but laugh.

“She reminded me of that on set. We used to come off into the wings after we’d been on for our scenes and just gossip and laugh and tell stories.

“We really became firm friends while we were doing that and this has just been like picking up that friendship again.

“As soon as we got out to Malta, it was just like, let’s have a laugh.

“Having Steve Edge (who plays Dom) there was great fun too. And David Ames, who I had never met before this, was so great as well.”

Sally was equally as happy to be reunited with an old friend filming the new series.

She said: “Like Jean and David, me and Les worked together back in 2008 and have remained mates ever since, so I couldn’t wait it work with him again. And he just happens to be a legend.”

Les teased a possible return for his character David, saying he would love to go back for another episode.

He added: “It would be lovely to do that. I think that David’s friendship with Jean is so lovely that it would be amazing if he reappears and comes back again.”

The episode synopsis continues: “Jean takes David and George to see her new shop. They fall in love with the shop and excitedly look through all the antiques. Jean gifts George one of her treasures.

“One of David and George’s wedding presents was a mysterious pack of old Tarot cards and Jean leaves them for Charlie to examine.

“Charlie is shocked to discover that they are no ordinary tarot cards. They are very old, very valuable… and very cursed.

“Jean doesn’t care about curses and rushes home to tell David what the cards are worth, but David and George are more concerned about the curse.

“Now David is sure that someone or something is out to get him.

“An old friend tells Jean what he thinks is really happening and Jean is forced to ask Dom to help her find David and George, before the threats turn deadly. Can Jean and Dom get to them before it’s too late?”

The Madame Blanc Mysteries continues on Thursdays on Channel 5.