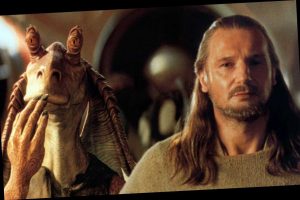 It was only a matter of time before Liam Neeson was asked about reprising his “Star Wars” character Qui-Gon Jinn in a Disney+ series, given the actor’s “Star Wars” co-stars Ewan McGregor and Hayden Christensen are returning to the franchise in the upcoming “Obi-Wan Kenobi” series. Neeson is out promoting his new film “The Marksman” and told Collider he would be interested in playing Qui-Gon once more, although the actor seemed oblivious to “Star Wars’” enduring popularity now that the franchise has expanded into television.

“I’ll be honest with you, I haven’t heard that at all,” Neeson said when informed that “Star Wars” fans are still interested in seeing him reprise Qui-Gon Jinn. “Sure, I’d like to [play him again] but I’m sort of wondering, is ‘Star Wars’ starting to fade away from the cinema landscape? Do we think?”

Given the lackluster box office performance of “Solo” and the polarizing fan responses of both “Star Wars: The Last Jedi” and “Star Wars: The Rise of Skywalker,” Neeson can be forgiven for thinking the space franchise is fading away on the big screen. However, the success of “The Mandalorian” on streaming has kept “Star Wars” popularity hiding high. The interviewer informed Neeson that Disney was now in development on 10 “Star Wars” TV series, including the Obi-Wan Kenobi show.

“Oh, so they are sort of spinoffs are they?” Neeson charmingly asked about the “Star Wars” series set for Disney+ before confirming about reprising Qui-Gon, “Sure, I’d be up for that! Yeah.”

Christensen’s return as Darth Vader in “Obi-Wan Kenobi” was confirmed last month during Disney Investor Day and earned massive buzz among “Star Wars” fans. Production on “Obi-Wan Kenobi” is set to begin this year, meaning the series will not debut on Disney+ until 2022 at the earliest. The next “Star Wars” television series will be “The Book of Boba Fett,” debuting in December 2021. In addition to a third season of “The Mandalorian,” Disney is also prepping “Star Wars” series “Andor,” “Rangers of the New Republic,” “Ahsoka,” and “Acolyte,” the latter of which is being created by Leslye Headline and is set before the events of “The Phantom Menace.”