Penny Lancaster joined Susanna Reid and Richard Madeley in the Good Morning Britain studio today, alongside Lissie Harper, the widow of PC Andrew Harper. The English model and TV personality spoke about joining the police force as a Special Constable and the support she was giving to Lissie’s campaign – Harper’s Law, which would see anyone guilty of killing an emergency services worker be jailed for life. Richard was keen to find out what it has been like for Penny, working on the streets of London and whether she had made any arrests. Rod Stewart’s wife then detailed the time recently when she talked someone down from committing suicide.

While Penny hasn’t made any arrests, she described her duties as “interesting”.

“I’ve had five duties so far, it’s been interesting,” she told the presenters. “When you think of policing, you think of the most violent crimes but we’re out there to help the most vulnerable and at this particular time there’s a lot of incidents on the bridges and I did help someone who was very desperate on the bridge the other night.

“It can be rewarding in so many ways.”

Susanna asked Penny if she felt the weight of the responsibility at that moment and Penny revealed: “I had the right training and I think from the life experiences I’ve had, that’s probably why I feel I belong in the police at the moment. 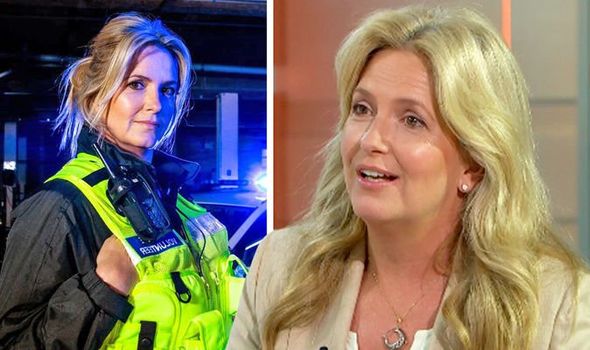 “I’ve been there and done it, having children of my own. I felt I was prepared for that moment but of course you never know until you’re there.”

Richard wondered whether Penny’s husband Rod Stewart tried to dissuade her from joining the police and Penny explained: “Not at all.

As for why she joined the police, Penny revealed: “I always think it’s important to campaign for things like Harper’s Law and to get involved in charity and community. The campaigning and charity work I do, this is just an extension of working for the community and for the good of people.

“It’s free of charge. I’m giving up my time to help the community and that’s why I wanted to become a police officer, to be out there. We’ve got to look after the police and make sure when their lives are taken, punishment is given.”

She added: “I’m on foot patrol once a week in the City of London, on the square mile. The first job of a police officer is the preservation of life and property, and that’s at the forefront.”

Penny also revealed she’s managed to stay under the radar while on duty.

GMB viewers were told: “Nobody’s recognised me. I’m in uniform. I’ve got my stab vest, armour, baton, cuffs, I’m dressed as a regular.”

Lissie also spoke about what Harper’s Law was campaigning for.

She told Susanna and Richard: “If somebody were to go out and commit a crime and ultimately cause the death of an emergency worker, they would then see themselves spending an adequate amount of time in prison, instead of what I believe to be inadequate, which would result in a life sentence.”

Susanna said: “It is currently, you would get a life sentence of a minimum term if you were found guilty of murder.

“The problem, I expect, particularly in your case, is if that person responsible for the death of emergency service worker is not convicted of murder.”

“I don’t want to get involved with manslaughter and murder because it’s just going to confuse things,” Lissie replied. “Ultimately what Harper’s Law is, is it’s own conviction. So hopefully that will stand in between.

“The problem with murder and manslaughter is that the line is just so fine between them. In my mind, it doesn’t matter, if you’re going out and committing the crime and you have the intent to cause death or serious injury then you know what you’re getting involved in.”

Penny added: “About 20,000 assaults on emergency workers last year and 90 percent of them were on police officers.

“And therefore, an assault on all public and it has to got through – Harpers’ Law – and as I mentioned, Lissie and I will be joining in COPS – Care of Police Survivors – walk to raise awareness and funds for a charity that supports the families of those officers that are left behind.”