Let’s hope that the coffin that’s buried in Sunday’s Power Book II: Ghost is spacious on the inside. Because given what’s going on among his survivors, there’s no way that the late James “Ghost” St. Patrick isn’t spinning in his grave.

Tasha accidentally lets it slip that her husband was a drug kingpin the Feds could never quite catch. Tariq finds himself wrapped up in another family’s violent, criminal ways. And Rashad Tate — Rashad Tate! — nearly gives the eulogy at Ghost’s funeral, a sure sign of hard times if ever there were one.

Read on for the highlights of “Exceeding Expectations.” 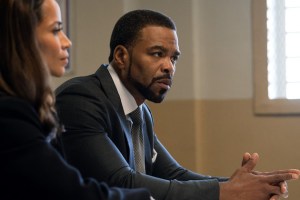 DEAD WRONG | The hour starts off on a not-great note for Tasha when she meets with her new lawyer, Davis Maclean, and his investigator, Paula (The Fosters‘ Sherri Saum). Tasha inadvertently refers to her deceased husband as “Ghost,” and the slip immediately piques Paula’s interest, noting that “the Feds could never prove that.” This only serves to incense Davis, who has realized that he has no idea who his new client really is. She flat-out lies to him about her reasons for having Ghost killed (domestic violence) but has to confess a little when Paula wonders if Tasha ever helped with the drug business at all. “I may have set up a few accounts,” she says, sheepishly. Later, Paula counsels Davis to walk away from the SUPER shady case.

At Stansfield, Tariq’s first day of canonical studies also goes sideways. He didn’t finish the book they’re studying (again!), Charles Dickens’ Great Expectations, and both the professor and his classmates call him out for it. Then there’s the matter of the eulogy he might give at Ghost’s funeral the next day. Davis wants him to “blow his a—up” and tell everyone exactly what kind of man his father was… which will only help Tasha’s defense. But Simon Stern thinks Tariq should “zhush” his father’s image with a glowing eulogy… which will help avoid the financial devastation that might accompany the airing of the truth about James St. Patrick.

Over at the U.S. Attorney’s office, Democratic power dude Steven Ott and John Mak realize that Maclean can’t prove Tasha wasn’t the kingpin behind all the bad things Ghost and Tommy did. So if Saxe just lays out the two men’s crimes, they reason, the jury will infer that she’s dirty and convict accordingly.

Davis tries to convince a judge that the whole thing is a political move, but he is denied: Tasha is going to trial. Blanca lets Maclean know she wants to testify, because “Tasha is no queenpin. And Saxe is dirty as f–k.” 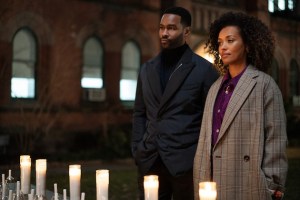 PROF. MILGRAM’S SECRET | Prof. Milgram, bless her heart, decides that it will be a good idea to throw a surprise, on-campus vigil for James St. Patrick, in order to provide Tariq with a “safe space” in which to mourn his dad. Jabari thinks it’s the worst idea he’s ever heard. As they argue, we learn that he wrote a book about her — without her consent — and that she got him the job at Stansfield. Eventually, their argument explodes into kissing, groping and sex right there in his office. Later, Carrie tells a woman about it at a restaurant. “What if he’s my person?” she wonders, forlorn, but her friend is not having it and advises her to work the steps. Oh, now it’s clear — this isn’t just a friend, she’s Carrie’s sponsor: Prof. Milgram is a sex-and-love addict. 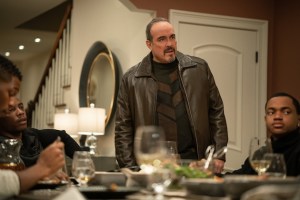 A WHOLESOME FAMILY DINNER | Tariq accompanies Zeke to a family dinner at Monet’s, which is crashed by a guy everyone calls Uncle Frank. They’re surprised to see him, given that he was recently in jail. “Lorenzo said to hit you up,” Frank says, but Monet and the kids are suspicious. She shuts down dinner fast, getting Cane to drive Tariq back to campus while Ezekiel stays at the house for the night. On the way back, Cane pulls over, makes sure Tariq knows he has a gun and menacingly informs the teen that “Whatever happens in our house, stays in our house.” Tariq’s not bothered, AND he points out that Uncle Frank is clearly a rat who got out of jail early in exchange for offering to get information on the family for law enforcement. Plus, Tariq adds, they all have the same goal: Keep Zeke in school, which will keep Tariq in school.

Back at the house, Monet is already well aware that Frank is a snitch. She also is very wary of Tariq’s request to come to dinner. She tasks Zeke with finding out everything he can about his roommate. Later on, Monique has Cane kill and dismember Uncle Frank; Drew helps his brother dispose of the body.

When Tariq gets back to campus, he walks into the middle of Milgram’s vigil and wants no part of it. Brayden whisks him away to a party at his older brother’s fraternity. When Trace (the brother) decks a security officer who shows up to send everyone home, Brayden steps in and sweet-talks the officials by dropping the family name. The campus cops eventually leave and the party rages on. 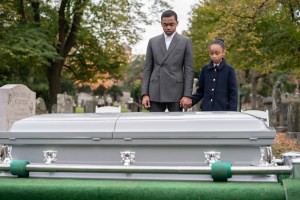 ASHES TO ASHES | The morning of Ghost’s graveside funeral arrives. The new plan is for Tasha to give the eulogy; she rolls up in a Federal Bureau of Prisons van in the dress shown above. Even while incarcerated, the woman knows how to make an entrance, no? But she’s immediately handcuffed, and everyone agrees that she can’t get up there and speak looking like a felon. Rashad Tate, who’s a pallbearer, says he’d be happy for a chance to address his constituents memorialize James, but Tariq steps up and says he’ll do it.

During his speech, Tariq says his dad was “a complicated man” and comments on how he’s the manifestation of everything Ghost could never be. The eulogy is well-received. Afterward, Tasha goes to embrace Tariq and before prison guards pull her away, she quickly whispers in his ear that she needs a morning-after pill for another inmate. Tariq later enlists Diana’s help with getting his mom the pill and a phone. “I can work with that,” Money says when her daughter relays Tariq’s request.

Soon after, the requested items make their way into Tasha’s cell. She calls Tariq to tell him she’s proud of him, but worries that he’s going to end up dead or in jail if he’s selling drugs to pay for her legal defense. “I think I found another way,” he reassures her.

We also learn that Monet is sleeping with the cop who showed up the night of the party in the season premiere. She thinks her kids don’t know about the affair, but Cane definitely sees the cop go into his house to bring Monet Frank’s snitch agreement. He also tells her that Frank went missing that day. “You know anything about that?” he wonders.

But Monet’s thinking about other things — like what the cop can find out about Tariq St. Patrick.

Now it’s your turn. What did you think of the episode? Sound off in the comments!