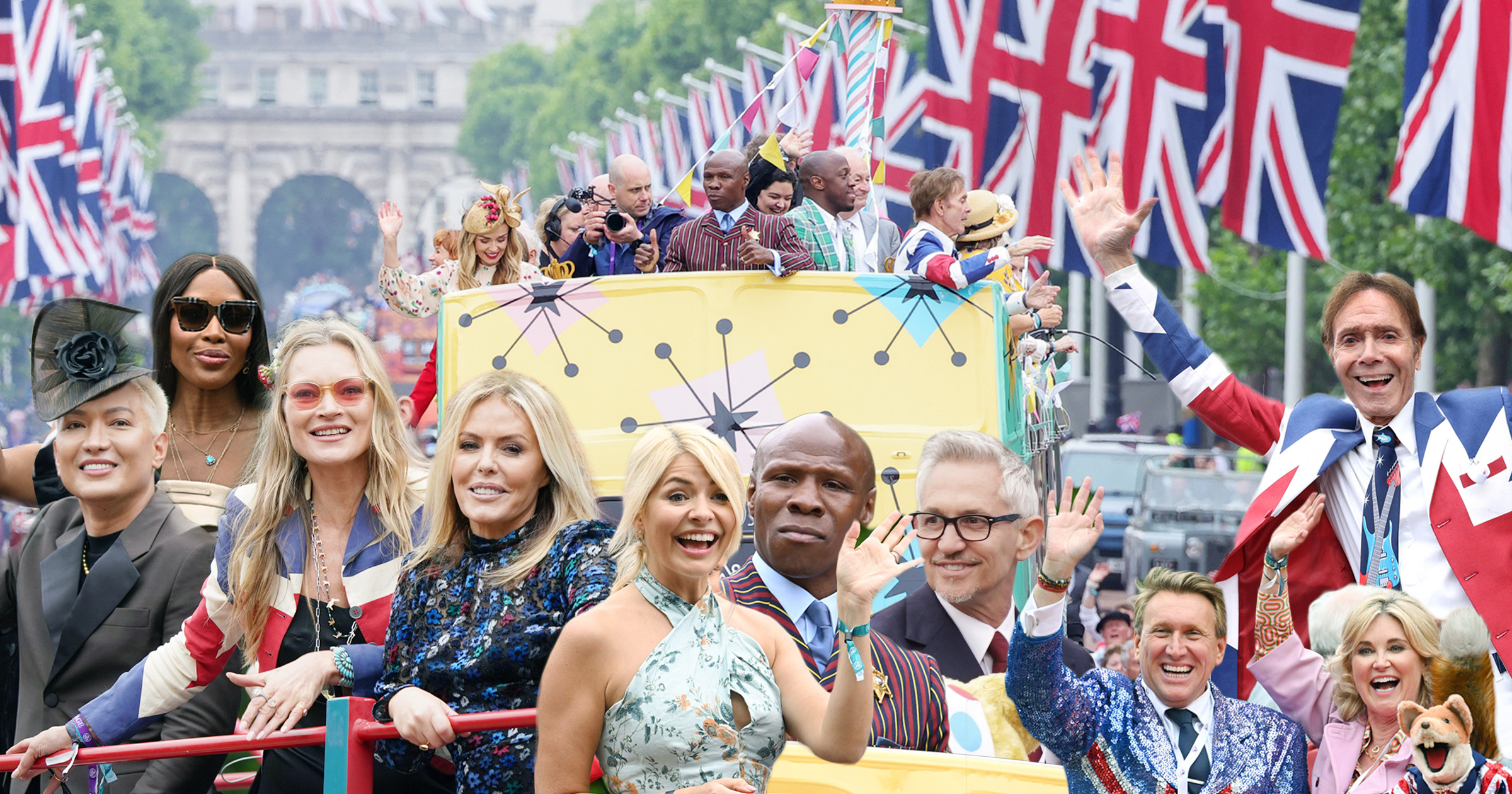 Many stars joined the procession to celebrate Queen Elizabeth II’s 70 years on the throne, with open-top buses seeing the likes of Kate Moss, Patsy Kensit, Sir Cliff, and Naomi waving to fans and dancing along to music.

British national treasures were invited to the procession, with a bus representing each decade of the Queen’s reign.

Sir Cliff, Katherine Jenkins, and Bonnie Langford were among those making an appearance on the bus celebrating the 1950s, alongside Gloria Hunniford and other stars.

Sir Cliff told AJ Odudu on the BBC: ‘Every time you have to be with the royalty, all those moments are great because all these years later, it still feels like the grandest honour

‘Where else in the world can you get a chance to do something like this?’

Bear Grylls also appeared alongside his son in a Land Rover Defender.

Alan Titchmarsh, dressed in a blue suit, red tie and white shirt, joined the pageant in the 1960s bus.

The open-top bus, which was decorated in psychedelic patterns and flowers, also featured Basil Brush and Kate Garraway among the stars.

Representing the 1970s was Strictly Come Dancing star Shirley Ballas, alongside Angela Rippon and Heather Small, as well as comedian Lee Mack, who presented at the Platinum Party concert.

On the 1980s bus was none other than Timmy Mallett, who rocked a Union Jack hat for the occasion.

He was joined by football legend Gary, as well as Pudsey, and Ruth Langsford as people dressed in aerobic wear danced around them.

Naomi told Anita Rani on the BBC: ‘It has been a great and amazing day just with friends and to salute the Queen who has given herself selflessly to this nation and the world and the Commonwealth.

‘And as working with the Queen’s Commonwealth trust, I’m so honoured to be here today for my country. And it’s just been an incredible Jubilee.’

Rocking up on the 2000s bus were Gok Wan and celebrity chef Heston Blumenthal as well as some sporting royalty – Sir Mo Farah and Dame Kelly Holmes.

The 2010s came next, with Holly Willoughby, Rylan, and Nicole Scherzinger showing off their moves.

Also joining the huge procession were stars from TV shows like RuPaul’s Drag Race UK and Strictly Come Dancing, as well as the Daleks from Doctor Who and British icon Basil Brush.

Meanwhile, the parade also featured a procession of ‘Dames in Jags’, with stars like Dame Darcey Bussell, Dame Joan Collins, and Dame Prue Leith being driven down the Mall in vintage cars.

However, the occasion wasn’t without its minor disasters as, in a very British turn of events, Dame Prue’s Jag broke down, with marshals in high visibility jackets having to step in to push her the rest of the way.

Finishing up the pageant was Ed Sheeran, who gave a stunning performance of his song Perfect.

A montage of video clips of the Queen throughout the years played as the pop superstar sang the emotional track while playing the guitar.

Fans were also delighted to see the Queen make an appearance on the balcony at Buckingham Palace after she was forced to miss various events throughout the weekend.

Dust off your Union Jack bunting, Queen Elizabeth II’s Platinum Jubilee is well and truly upon us.

Taking place from Thursday, June 2, to Sunday, June 5, the celebrations mark Her Majesty’s record-breaking 70th year on the throne.

Across the UK, there will be street parties, concerts, and other special events attended by the Queen and senior members of the Royal Family.

Visit Metro.co.uk’s Platinum Jubilee page for all the latest updates.