“Reef Break” is dropping in on CBS’ “Hawaii Five-0” wave. The new ABC crime drama swims in the same waters as the classic reboot – criminals are foiled against a tropical backdrop – but is more content to hang loose than go high octane. It’s the series equivalent to a vacation in that it tickles the brain but doesn’t tax it. It’s wish-fulfillment that’s the stuff of beach reads.

Poppy Montgomery of “Without a Trace” and “Unforgettable” fame retains her gun but trades drab trousers for minidresses and a wetsuit to play Cat Chambers, a former cat burglar thief who’s hired by the governor of the fictional Pacific Island of Nimitz Bay to take care of thorny issues that are better not publicized. It’s a story that’s been done before, and this narrative familiarity saves the show from excessive setup. Why waste time with smaller eddies when there are better breaks to be had?

“Reef Break” fully embraces its escapist identity, dispensing with the pesky exposition and logic. The barest semblance of a plot is enough to buoy this series that squeezes solving crimes in with the more important island lifestyle of surfing, beach cabanas, and umbrella-laden cocktails. And of course, the series sets up steamy casual hookups in its pilot, a good indicator of the vicarious and guilt-free offerings to come.

The brash and outspoken Cat has old business and an ex (Ray Stevenson) to take care of when she returns to Nimitz Bay after a five-year absence. As soon as she arrives, she runs into the very accommodating police detective Wyatt Cole (Desmond Chiam of “Now Apocalypse,” “The Shannara Chronicles”), and later the deputy governor Ana Dumont (Melissa Bonne),and the young woman Petra (Tamala Shelton), who knew Cat back in the day. What are each of their backstories? Don’t know and don’t care, even when the show does make an effort to explain. That’s not the point of this series anyway.

The point is that Cat is an attractive woman in her prime with plenty of life experience to make her confident in every arena. She’ll maneuver her shortboard like a pro, have the gall to blackmail the governor, engage in a little breaking and entering, enjoy no-strings hookups, and even crime-splain to law enforcement officers. What she won’t do is second-guess herself, defer to men, or apologize for her actions. Throughout it all, Montgomery (who’s also an executive producer on the show) looks like she’s having the time of her life cracking wise and delivering all the outrageous lines. She also dares to walk in the sun without any hat (although presumably with very strong sunscreen), the ultimate in DGAF, do what you want attitude. 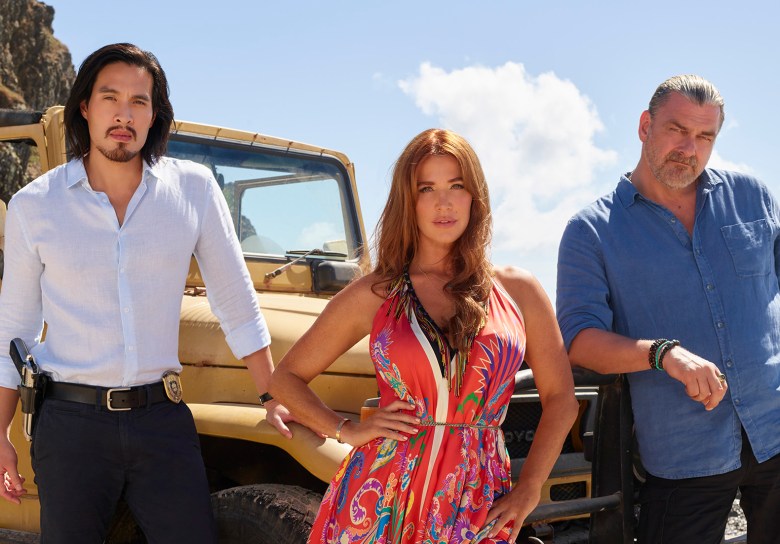 With only one episode provided for review, it’s too early to see if the ride will be choppy or clean, but the pilot’s main crime story is unremarkable until it becomes ridiculous. Fortunately, the show doesn’t rely on its storytelling and instead on its island trappings. Somehow in less than an hour, the first episode visits the water for significant plot points four times, and even holds its most ludicrous but satisfying showdown at the shoreline. This setting is not squandered.

The island backdrop is more than just a gorgeous setting though; it actually adds international flair and interest to the proceedings. The ABC Studios and France’s M6 co-production is shot on Australia’s Gold Coast, which not only brings authenticity to the outdoor elements, but to its casting as well. Most of the actors hail from Australia (even Montgomery, whose original accent slips out occasionally), and there’s clearly an effort to show the range of multicultural backgrounds that comprise the Pacific Island populations.

In particular, Chiam’s casting as a character who doesn’t conform to any of the usual Asian or Pacific Islander stereotypes is a refreshing addition to American TV – especially after the controversy that led Daniel Dae Kim and Grace Park leaving “Hawaii Five-0.” Furthermore, his character Wyatt has an unexpected connection to another character that is thoughtfully conceived and challenges viewers’ perceptions.

With a name like “Reef Break” that evokes coral reefs and “Point Break,” the show only requires two things to succeed – water and crime, both of which are found in abundance on this tiny island. It’s just a bonus to watch a badass with beachy waves save the day.

Watch the trailer for “Reef Break” below: