The operatic life of legendary tenor Luciano Pavarotti is on full display throughout producer/director Ron Howard's new documentary Pavarotti, but nowhere is the drama more enchanting than in scenes from the 1991 Pavarotti in the Park concert. 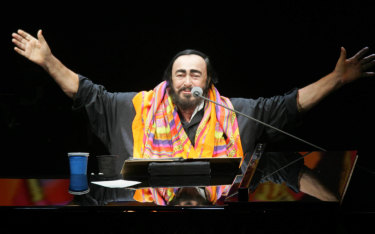 That was the night the Italian opera star serenaded a rain-drenched Princess Diana in front of 125,000 fans (and Prince Charles) during a downpour in London's Hyde Park.

It was a romantic high-water mark for the most famous singer in the world and the princess, and the beginning of an enduring friendship. 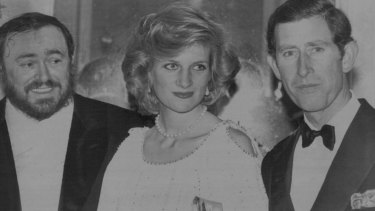 Luciano Pavarotti with the Prince and Princess of Wales at the Royal Opera House in London’s Covent Garden in 1984.Credit:AP

"It was the tenor who met the princess in the rain of Hyde Park," says Dickon Stainer, president of Classics and Jazz at Universal Music Group, then a young classical music executive in the audience who witnessed the scene as it played out on the park's giant screens. 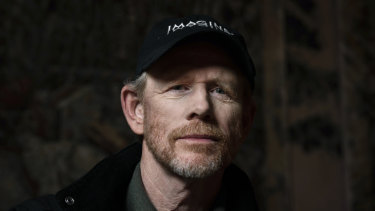 Ron Howard’s new documentary on Pavarotti will introduce the opera icon to a a new generation.Credit:AP

"That romantic image of Pavarotti addressing a princess has gone down in history as an iconic moment in our popular culture. He allowed everyone to dream a little."

The heavy rain could have spelled disaster for the charity concert – Pavarotti even suggested calling it off that morning –but coming off the global success of The Three Tenors concerts, London still showed up in force to see Pavarotti at the free show.

As promoter Harvey Goldsmith took to the stage to urge fans to put down their umbrellas to stop obstructing the view, something remarkable happened.

Princess Diana, in the VIP area next to Prince Charles, was one of the first to take her umbrella down. The act sent ripples through the audience as fans put theirs down as well.

"You could see it on the screen as Diana proceeded to get completely soaked," Stainer recalls. "It played right to her 'People's Princess' image, Diana not bothered about the buckets of rain. And they [Diana and Pavarotti] formed this bond." 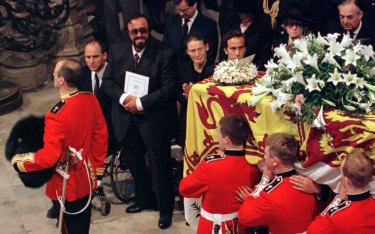 Luciano Pavarotti at the funeral of Diana, Princess of Wales, in Westminster Abbey on September 6, 1997.Credit:AP

A beaming Pavarotti responded later in the concert, dedicating Puccini's romantic aria Donna Non Vidi Mai, translated as 'I Have Never Seen a Woman Like That', to the beautifully rain-soaked Diana. He did cheekily ask Prince Charles' permission before starting the song.

"But there was going to be no stopping Pavarotti. He was an irresistible force," says Stainer. "Even the future king of England was not going to be able to do anything about that moment."

The Hyde Park footage is amazing, Howard says, demonstrating two global stars coming together at their finest moments. Prince Charles does his best to look OK with the rain and the adoration directed at his wife.

"But I keep looking at that scene, and it's Pavarotti singing to your wife. And she's just blushing," says Howard. "How would you feel?"

The still-drenched Diana and Charles even unexpectedly showed up at the concert after-party to meet Pavarotti. The high-profile friendship between the princess and the tenor served as an inspiration for Pavarotti to focus on charity endeavours, such as his Pavarotti & Friends concerts with pop stars like Bono.

The friendship would continue with Pavarotti lending his support to Diana's ventures, and the princess returning the favour at his charity concerts. A grief-stricken Pavarotti attended Diana's 1997 funeral in Westminster Abbey; he died 10 years later to the day.

"Pavarotti sort of discovered philanthropy through Diana, that became very clear to us making this film," says Howard.

"Meeting Diana opened up a new chapter in his life. She was on that path and it inspired him."