Saturday Night Live invites a diverse array of hosts, from entertainment to sports and also sometimes real life figures. It doesn’t always work though. SNL with Steven Seagal proved to be a bad call, and everyone interviewed in the book Live From New York: The Complete, Uncensored History of Saturday Night Live As Told By Its Stars agreed Seagal was bad news. Bob Odenkirk was an SNL writer that season and also agrees.

Odenkirk was a guest on Howard Stern’s radio show on Feb. 28. Stern had been waiting to ask him about Seagal, so Odenkirk did not disappoint.

Odenkirk confirmed that reports of Seagal’s shenanigans were not exaggerated. That’s also why you never see his episode in SNL reruns.

“I was there when he hosted SNL one of the most famous nightmare can’t reshow that show ever,” Odenkirk told Howard Stern.

Stern even asked why Executive Producer Lorne Michaels went through with it. Odenkirk said once Seagal showed his true colors, it was too late.

“By the time you get to Wednesday, what are you going to do?” Odenkirk said. “It would be funny if he booted him on Thursday and just did the show without him.”

The Hans and Franz sketch was Steven Seagal at his worst

Dana Carvey and Kevin Nealon played bodybuilders Hans and Franz in a recurring sketch. They were playfully mocking Arnold Schwarzenegger and even had his bodybuilding standees on their set. A good-natured Schwarzenegger himself appeared in a sketch once, but Seagal was really intimidated by the characters.

“It’s Hans and Franz and we were talking about, I was helping with Hans and Franz that week,” Odenkirk said. “I didn’t usually help with that piece but I love those guys. Seagal read it and said, ‘If I do this sketch, if I do it’ they want to fight him. ‘Hey, we take you on.’ He goes, ‘If I do it, I have to beat them up.’” 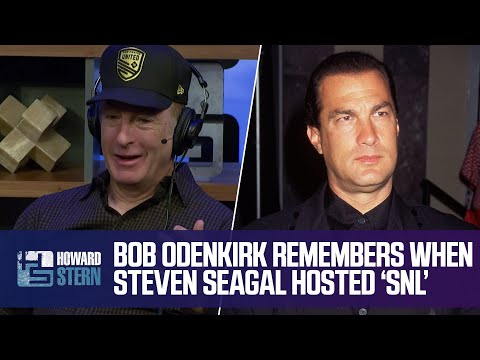 Odenkirk simply tried to keep a straight face explaining to Seagal that he didn’t need to prove he’s tougher than SNL’s fake bodybuilders.

“It’s like a John Wayne thing, it’s the most ludicrous scenario,” Odenkirk said. “Don’t worry, no one’s thinking anyone beat anyone up here. That was his attitude the whole week. He kept saying, ‘I’ve never seen your show. I don’t know what you do here.’ Like really? You’ve never seen Saturday Night Live? Where do you live?”

Seagal wanted to do one sketch that would foreshadow his film On Deadly Ground. Seagal was an environmentalist in the ‘90s, so proposed a sketch where he beats up the board of Exxon after the Valdez spill. The problem is, a live comedy show is not the same as an action movie.

He wrote a scene and it’s the last scene in the show and it’s like one of his movies but they tried to do it live. They got some stuntmen to come in. It’s insane. There’s this board of directors, a bunch of stuntmen in suits. As a viewer you’re like, ‘Who are these actors? They’re not in the cast.’ There’s some speech and then he enters the banquet room, it’s live, and he’s beating them up and throwing them around the room. It goes on for like eight minutes. It’s the longest scene you’ve ever seen. Then at the very end, he turns to camera and says, ‘This is what happens when you pollute the planet.’ The audience is mystified.