Home » TV & Movies » Snowfall Recap: Who's Trying to Kill Franklin and His Family?

Snowfall Recap: Who's Trying to Kill Franklin and His Family?

Watching this week’s Snowfall felt like witnessing two different shows being smooshed together.

In the first 10 minutes, the drama focused on Franklin and Veronique excitedly learning they’d secured the downtown property they have been wanting to buy. With just a week to get the earnest money into escrow, the couple turned to Louie and Jerome for their portion of the buy-in, only to learn Franklin’s aunt and uncle weren’t interested.

Louie said they were still thinking about it, and Jerome said the $10 million price tag was too high. But when Franklin adjusted the price and tried to play nice with Louie, despite their past rows, Louie seemed to take too much pleasure in crushing her nephew’s dreams and saying they had dreams of their own. An angry and frustrated Franklin split and took Veronique with him, but she never gave up. Instead, she told Franklin if his mom Cissy intervened, perhaps Cissy could change Jerome and Louie’s minds.

Content with the fact that Veronique and Cissy could handle Louie and Jerome, Franklin met with Teddy for the drop and took the family’s Samoan bodyguard Fetu with him because Peaches called in sick. Teddy, who had come with Gustavo, was suspicious of Fetu and had a lot of questions, but those questions and the drop got violently interrupted when a van full of armed men rolled up and opened fire.

The men shot and killed poor Fetu — there goes the show’s one character of Pacific Islander descent — and wounded Gustavo and Teddy. In turn, Teddy shot and killed the driver and drove away while bleeding profusely. Franklin managed to get behind the wheel of his Cadillac and backed into the van to escape. The crash damaged the car badly, however, so Franklin and Gustavo had to get out and walk with two duffle bags full of millions of dollars on their backs.

They found a payphone to call and let Jerome know what was going on, but before Jerome — who was having lunch with Louie, Veronique and Cissy — could find out what happened or where Franklin was, another van rolled up to the restaurant’s outdoor seating area and opened fire on them, too. Some innocent lunchgoers were killed, but Louie, Jerome, Cissy and Veronique miraculously didn’t get a scratch. 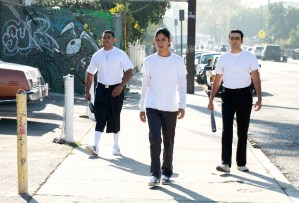 Franklin heard the shots and hung up the payphone to tell Gustavo what was going on, and while he was doing so, some Latino gang members walked up and demanded to know what was in the bags. Gustavo tried to speak Spanish to them and play it off, but it didn’t work, and as soon as one of the gangbangers spotted dollar bills through a bullet hole in one of the bags, everything fell apart. Franklin flashed his gun, and that made all of the guys flee except one.

The youngest and most clever of them all, the kid said he wanted those bags, and soon, a few armed reinforcements showed up, and Gustavo took one look at Franklin and told him to run. After a wild and intense goose chase, Franklin and Gustavo found a house to hide under. They hid the bags of cash, and when the coast was clear, they broke into what seemed like an abandoned house and tried to call Jerome and the family again.

The phone didn’t work, and while their backs were turned, a weird old white man snuck up on them and shot them with a tranquilizer gun. Gustavo and Franklin passed out, and when they woke up, they were in a cage next to a ravenous-looking caged tiger. Elsewhere, a third van full of gun-toting killers tried to shoot and kill Leon and his crew while they were meeting with Avi. Leon killed one of the men, but one of the shooters also killed one of Avi’s men. 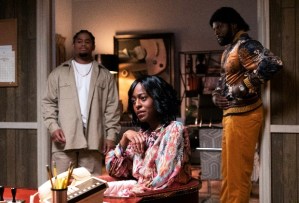 Jerome, Leon and Louie regrouped and tried to figure out where Franklin was and who was trying to kill them all. No one could find Peaches, so they went looking for Black Diamond and Dallas. Veronique and Cissy were made to stay put for their own safety, and everyone was armed and antsy.

Teddy, meanwhile, had driven to an old informant’s house, and she saved him and his arm, but it got freaky, weird and bloody, especially after old girl found the cocaine in Teddy’s trunk. Uh-oh.

What did you think of this week’s epic and trippy Snowfall episode? Do you think Peaches is behind all of this, and what’s up with that tiger? Drop your thoughts in the comments.