Spoiler alert! Do not proceed if you haven’t watched Ted Lasso season 2, episode 6, “The Signal.”

Friday’s Ted Lasso ended with a thrilling win for Richmond, a terrifying moment for Ted and a major reveal about Rebecca’s mysterious online suitor!

“The Signal” centered around the start of FA Cup, with AFC Richmond set as major underdogs against Tottenham — but there was plenty of drama off the field as well. After attempting to build bridges between star player Jamie Tartt (Phil Dunster) and returning Richmond legend Roy Kent (Brett Goldstein), who officially joined the coaching staff in last week’s episode, Ted (Jason Sudeikis) had almost seen his team to an improbably upset victory when he was struck with another panic attack.

Fans of the Emmy-nominated comedy will remember the good-natured coach suffered an attack in season 1, following the team’s underdog win over Everton — which ended with Rebecca (Hannah Waddingham) finding him curled up outside of a Liverpool karaoke club. This time around, however, the Richmond owner had to watch in shock as her friend rushed off the field in a fog.

“And I love the fact that we then find her in his office, we then find her finding his coat on the floor of the locker room,” the actress added. “She’s consumed as if she’s having a panic attack herself.”

Waddingham admitted that the moment was an important one for her in tracking the evolution of the characters’ friendship in season 2. After Ted forgave Rebecca for her initial plan to sabotage his team in the freshman finale, the Richmond heads have continued to forge their improbable bond, sharing personal chats, commiserating over their respective divorces and even spending a sweet Christmas holiday together, handing out presents to less-fortunate families.

“I was worried that because they had been so Ted and Rebecca, Ted and Rebecca all through season 1, as I looked at it, I didn’t feel they were together as much,” Waddingham said of the acclaimed show’s second season. “But what [the show has] very cleverly done, of course, is they have scenes where you don’t necessarily see them together, but you do see- the audience sees them together.” 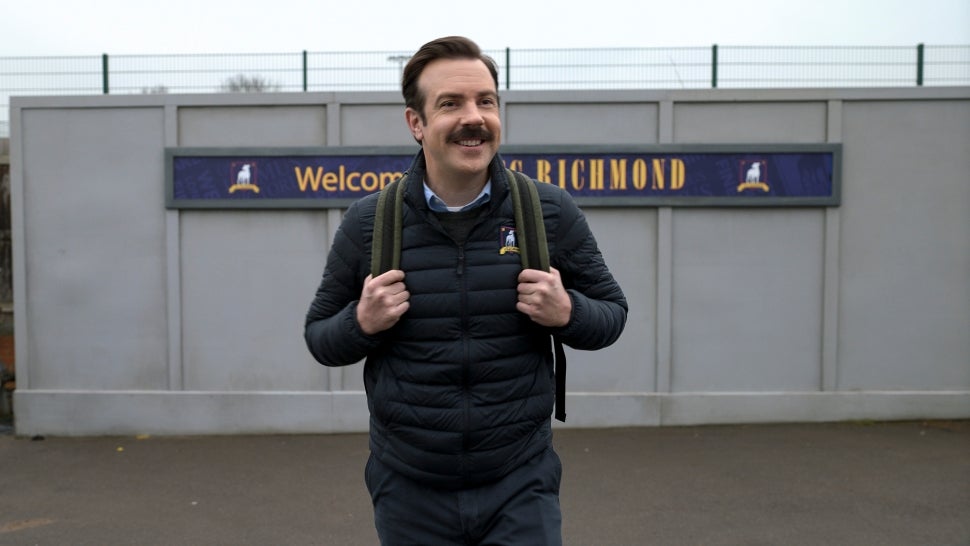 But, while the show had been dropping hints that Ted might also be on the other end of Rebecca’s deepening chat with a mystery man on the Bantr app, episode 6’s most shocking reveal showed the audience that it was actually Richmond’s young star, Sam Obisanya (Toheeb Jimoh), who’s been winning her heart.

Waddingham admitted that she and Jimoh — “What an absolute gem and a half he is” — had a similarly shocked reaction when they learned that Sam was Rebecca’s online suitor. However, there have been a few hints of a bond between Sam and Rebecca. In season 1, episode 6, Sam was the Richmond player who came to Rebecca’s office to ask if she would be a part of the team’s cleansing ritual to shake off a run of bad luck.

“Coach thinks it’ll only work if the whole team is there, and Ms. Welton, it’s your team,” he told her at the time, sweetly and — judging by Rebecca’s reaction — unexpectedly.

“I think it was coming then, it was coming with who takes her jacket in the karaoke scene,” Waddingham noted, recalling the moment an episode later, in “Make Rebecca Great Again,” when she got to flaunt her West End chops on a team-thrilling cover of “Let It Go” from Frozen.

While Sam and Rebecca still have no idea that they are each other’s mysterious Bantr crushes, Waddingham welcomes all speculation when it comes to her character’s romantic future.

“That’s what I love. Through the whole of season 2, I want the audience to be along with Rebecca going, ‘Oh girl, what are you doing? Not him, not him, jog on,'” she shared, referring to her character’s hookups with the dim-witted “Hunky Luca.”