The Age’s Wrong Skin named podcast of the year

Last Saturday, while you were glued to the election coverage, Australia’s podcasting community gathered for the third annual Australian Podcast Awards.

Like all things podcasting, the event has independent roots – it was created as a passion project by podcast fan Dave Gertler, who assembled industry professionals to peer review the top podcasts and independent hits.

The Age‘s true crime podcast Wrong Skin was awarded podcast of the year. The series from Walkley Award winner Richard Baker investigates the 1994 disappearance and death of Julie Buck and Richard Milgin in the Kimberley. Wrong Skin also took home an award for best investigative journalism and true crime, beating out the ABC’s Unravel: Blood on the Tracks and the international hit The Teacher’s Pet from The Australian. 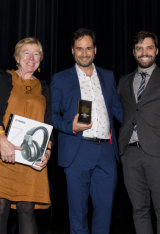 Now in its second season and showing no signs of slowing down, even after the Mueller investigation has wrapped up, Russia, If You’re Listening won the political, social and cultural affairs category.

The show beat some strong competition from ABC stablemates The Signal, The Party Room, and Class Act, as well as The Conversation’s Trust Me, I’m an Expert and The Sydney Morning Herald’s Please Explain. All are fantastic listens for those with infinite time and curiosity.

ABC journalist Jill Emberson’s very personal account of living with ovarian cancer, Still Jill, won best documentary and storytelling. The six-part series follows Emberson through chemotherapy as she relives the moment she was diagnosed, when her cancer returns, and the experimental treatment she takes in order to buy more time, all while planning a wedding. A powerful story told with expertise.

The event even had an independent true crime category, so the independents didn’t need to compete with the staff and resources of a full newsroom. Winning this category was Sarah Steel’s Let’s Talk about Sects, a fascinating and well-researched look into cults and the charismatic leaders behind them.

Winning the popular vote was Shameless, a pop culture podcast from Zara McDonald and Michelle Andrews. Their on-air chemistry and intelligent insights into the superficial world of celebrity gossip and social media influencers make the show a guilty pleasure for many fans.