Home » TV & Movies » 'The Bachelor': Victoria Fuller's Breakdown Is Likely Because Chase Rice's New Album Is About Her

'The Bachelor': Victoria Fuller's Breakdown Is Likely Because Chase Rice's New Album Is About Her The drama is at an all-new level in week 4 of Peter Weber’s season of The Bachelor. He chooses Victoria Fuller for another one-on-one date, but things do not go as planned. Let’s take a look at what happens and why Victoria F. has a complete meltdown during her date to a Chase Rice concert. 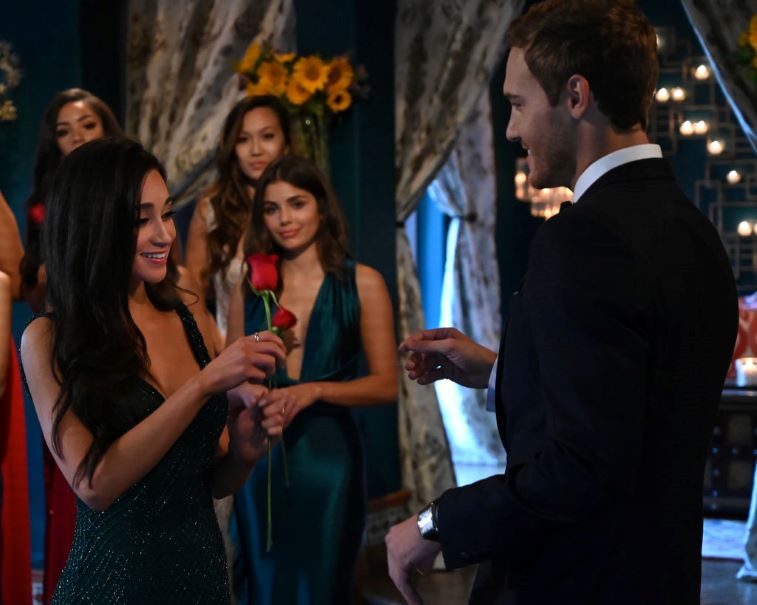 What happens on Peter Weber’s date with Victoria Fuller to a Chase Rice concert?

Weber surprises Victoria F. with a country music concert on their date in Cleveland, Ohio. The 25-year-old medical sales rep is excited about the date until she walks up to see country-star Chase Rice singing.

“I have a surprise for Victoria,” Peter tells the cameras. “We have our own private Chase Rice concert.”

Victoria is considerably upset when she tells Peter that she dated Rice. Hardly any details are available about the relationship between Victoria and Rice. However, it was recent enough and intense enough to bring her to tears.

“I can’t do this!” she cries, hysterically to Peter before running off.

The bachelorette is not the only one upset that the producers brought her ex-boyfriend on the show.

“They set everybody up. I didn’t sign up for that,” the country music singer told The Morning Toast at the 2019 CMAs. “That’s my problem with it. At the end of the day, they have a job to do. I don’t have to be a part of that.”

Rice also had no idea that his ex-girlfriend, Victoria, would be on the show when he agreed to go on The Bachelor to promote his new album.

Right before week four of The Bachelor—which features Rice— aired, he released a brand new seven-song album. He told ET that The Album Part I is about a terrible breakup.

“It’s one of those breakups that was like neither one of us deserved it,” Rice told ET. “We’re both good people. She’s great. It just wasn’t the right time. I played it [‘Everywhere’] for her actually. She was uncomfortable. She laughed… She never thought she’d have a song written about her, and if she did, she didn’t want it to be that.”

Why not drop an album at midnight? “THE ALBUM Part 1”, out TONIGHT. Tag a friend, gonna go through and pick some random folks in the comments to DM and send a link to The Album now so you can hear it before anybody. Bout time we got new music. Cheers y’all??#TheAlbumiscoming

While the country singer does not mind writing about his personal life experiences, this situation was a delicate topic to tackle.

“The writing is easy, the singing is easy, but writing it in a way that doesn’t throw her under the bus because she doesn’t have a way to defend herself,” Rice explained. “That’s the hardest part for me—getting personal, but not completely screwing the other person over at the same time, and I don’t think I’ve done that.”

Is Victoria Fuller the ex-girlfriend that Chase Rice wrote about in his new album?

The country star does not come out and say that the songs are about his ex, Victoria. However, we can gather from her ABC bio that she loves a man who is in touch with his feelings. She also is a huge country music fan and will travel to see her favorite stars in concert, according to her bio.

We know that Rice is in touch with his feelings since he so often writes about them in his songs. The artist began his musical career in 2010. It is possible that Victoria met him at one of his concerts.

Could Rice’s new album be about Victoria Fuller? At this point, it’s speculation; however, it does seem very possible.

Read more: ‘The Bachelor’: Who is Victoria Fuller’s Ex, Chase Rice? Why is He Frustrated With The Show’s Producers?