Cooking, by and large, is an act of service. Someone makes a meal, and someone eats it. The same holds true whether you’re whipping up a breakfast of scrambled eggs or timing out seven courses for 100 paying dinner guests. Prepared food is more than fuel; it’s a gesture, often one of respect, affection, even intimacy.

“The Bear,” FX’s half-hour cooking drama, doubles down on that hospitality, then compacts it under the strain of personal loss. Carmen “Carmy” Berzatto (Jeremy Allen White) is one of the best chefs in the world (at least, according to Eater). He tore through fine dining’s top kitchens to make a name for himself at a young age, only to end up back at the family restaurant in Chicago, sans one family member. When his brother Mikey died of suicide, he left Carmy his kitchen: “The Original Beef of Chicagoland.” The historic sandwich shop hardly demands Michelin-star expertise, but he’s not about to sell or let it close. It’s his brother’s place. Keeping it running keeps his memory alive. But will it break Carmy in the process?

Created by Christopher Storer (“Ramy,” “Dickinson”), who co-showruns with fellow writer, director, and executive producer Joanna Calo, “The Bear” is about as intense as a cooking show can get without going full Gordon Ramsay. Much of the eight, half-hour episodes is spent in the kitchen, as dishes clang, feet shuffle, and chefs shout over one another. Aside from the opening credits, Episode 7, “Review,” is told in a single, 20-minute oner, as Storer (who directs) depicts a particularly stressful day at The Original Beef by discreetly maneuvering his camera through the cramped North Side shop. Orders pile up. Tempers start to rise. It seems impossible that these few people could serve so many others; the scale of their responsibility disproportionate to their shack of a restaurant, their means, their single sets of hands.

Yet therein lies the series’ central question: Why do it? Why stress and sweat and scream, just so some schmoe can grab a sandwich after work instead of making one for himself? Why risk social alienation and financial ruin for a job that demands your every waking moment (and, for a few Original Beef staff members, wakes them up at night)? “The Bear” doesn’t provide a definitive answer — despite a few on-the-nose moments of clarity — nor does it fully resolve whether Carmy’s obsession with cooking could prove as harmful as his brother’s cocaine addiction. Perhaps that’s a topic for future seasons (though the finale does rush through a wrap-up). But, buoyed by an honest, magnetic performance from Ayo Edebiri (and a strong turn from White), the new series finds verisimilitude in its detailed workspace and quiet moments of serenity in its mismatched colleagues, all navigating grief and growth through a shared goal: service.

“The Bear” draws simple pleasures from the pursuit of order amid the chaos, as Carmy tries to implement established methodologies in his inherited staff of veterans and upstarts. The restaurant is in debt. The books are a mess. The menu doesn’t make sense — not to Carmy, anyway — but Mikey’s entrenched staff wouldn’t change a thing. So, with a dash of difference here and a sprinkle of shifting there, Carmy starts to change the culture. And to speed things up, he brings in new blood: Sydney (Edebiri), a trained and talented chef whose failed catering company landed her back at square one. Bursting with ideas and eager to whip the store into shape, Sydney butts heads with just about everyone: Tina (Liza Colón-Zayas) doesn’t like being bossed around by a young’n. Ebraheim (Edwin Lee Gibson) just likes how things are, and Richie (Ebon Moss-Bachrach), well, Richie is a problem, and not just for Sydney.

On paper, Sydney and Richie are like two sides of a coin: They both want what’s best for the restaurant, but their visions conflict — even when their vision is supposed to follow Carmy’s. She’s new, gracious, and encouraging. He’s old(er), grating, and disparaging. Richie was Mikey’s best friend and remains the restaurant’s manager, so he’s not going anywhere, but he’s also the kind of guy who, if he just so happened to leave, everyone would be better off. More than one scene emphasizes his status as the wrench in the machine, as Richie’s raucous presence disrupts the good mood and sound plans established seconds before he entered. Unfortunately, few scenes illustrate substantial depth as much as misplaced pity. Where Sydney serves as a breath of fresh air — a calming, endearing character who invites our curiosity without testing our patience — Richie sucks up too much of it. In a noisy show, he’s the loudest person in every room, and “The Bear” never draws enough out of him to justify his dominating effect on each episode. (Through no fault of Moss-Bachrach, who does instill tenderness in fleeting moments.) 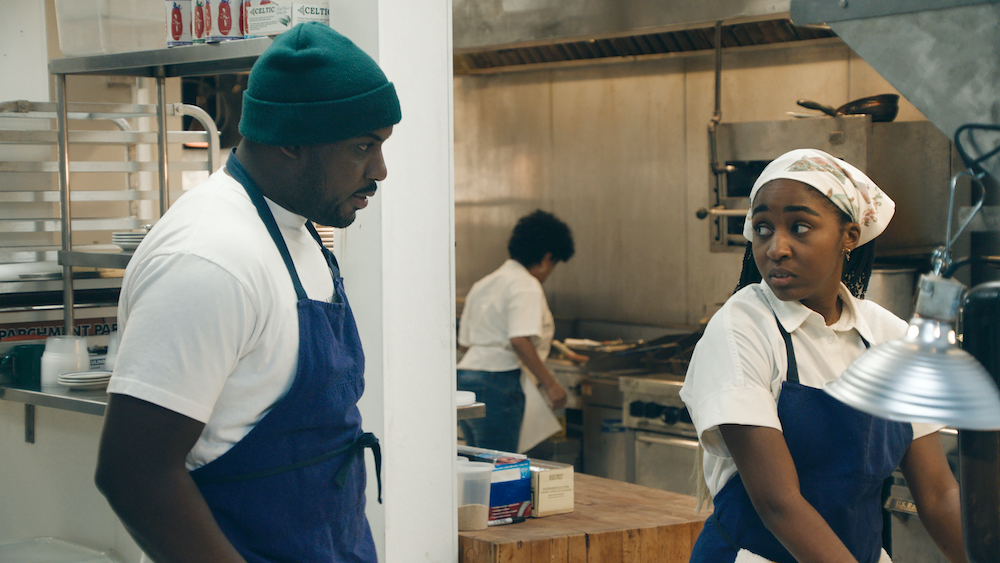 Lionel Boyce and Ayo Edebiri in “The Bear”

Set in Chicago’s River North neighborhood, “The Bear” wears its city on its sleeve. The restaurant’s specialty is Italian beef (which would make their main competition Portillo’s or, locally, Mr. Beef). A Malört billboard sits atop the shop (tempting tourists to sample the liquor all natives know is actual poison). One guy is literally named Cicero. Thankfully, there’s only one allusion to the Chicago Bears football team, despite its obvious, seemingly incidental, ties to the title. The blue-gray aesthetic matches the Windy City’s often-overcast atmosphere, as well as its working-class reputation. Time is taken to appreciate the artistry of fine cuisine, though this isn’t the clean, delicate world of “Chef’s Table.” Quick cuts to sizzling oils and greasy ovens keep viewers’ rooted in an industrious, informal mentality — one that’s urgency and singular focus (food) mimics Carmy and Sydney’s.

Watching the former expel his grief by cooking up a storm as the latter weighs whether all his flaws (and Richie’s) are worth a top chef’s education can be exhausting, and “The Bear” never reaches the depths conveyed by its ardent cast. But it’s hard not to invest in The Original Beef’s success anyway, praying that next sandwich, that next customer, that next idea is the one that makes all their hard work worth it. (I would follow Marcus, a sweet, inquisitive pâtissier played by Lionel Boyce, to his own pastry shop in a second.) The final two episodes flex an experimentation — in format and purpose — that gives added hope for the future, and while “The Bear” may not be one of the best shows in the world, its own act of service is appreciated. Storer and Calo invite us into a fast-paced, high-risk world, hoping to entertain us; hoping we can empathize with those living in it; hoping their gesture is more than just a piece of filler in TV’s content machine. And it is, for those who enjoy a little heat.

“The Bear” premieres all episodes Thursday, June 23 on Hulu.