Today’s edition of the ITV quiz show had its ups and downs, and ended in a surprising defeat against chaser Jenny Ryan, also known as the Vixen.

Before that though, 66-year-old retired geologist, from Surrey, Neil, 54-year-old housing officer Steph, from Wigan, and full-time mother Fran, 27, from the West Midlands, were giving their advice to player three ahead of his battle against the chaser.

American The Chase contestant Spencer, 30, admitted he’d have some gaps in his knowledge over English trivia, so was keen to take the game carefully, but Bradley tried to encourage him to take the higher offer.

The actor-comedian, 59, insisted the English teacher contestant was a “good player”, but told him to get advice from the rest of the team.

Addressing Bradley’s comments on the possible offers on the table, and the team’s attitude today as a whole, Neil told Spencer to take the middle offer.

The American contestant had managed to rack up £5,000 in his cash builder, and Neil insisted that was a decent sum to split between the team.

“Bradley might think that’s boring,” he declared. “But five, six, five in the pot – I think that’s nothing to be sniffed at.”

Unfortunately his plan didn’t work and Jenny managed to catch him. 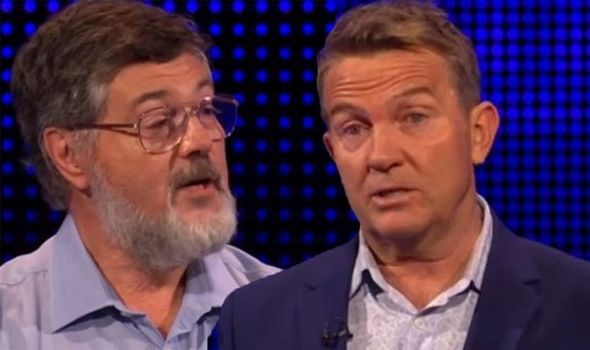 No I don’t think that’s boring

Disappointed at the outcome, Bradley praised Spencer’s performance, and told him to “carry on being American”.

“I love it I really do,” Bradley giggled, and Jenny noted she was “very glad” to get rid of such a “good” player.

Bradley then proceeded to tease Spencer and mimicked his “swagger” walk, before joking the Texan contestant would “gallop” off on his horse “into the sunset”.

Things got worse as Fran chose to take the lower offer of minus £2000, thereby taking hard-earned money away from the team.

She managed to get through, and luckily the game turned a corner for the team in the final.

Despite only managing to bank 15 correct answers, Jenny faced a nightmare round and she faltered on a whopping eight questions.

Delighted to take the pushbacks where they could, the team managed to beat the Vixen, and won £3,000 each.

Having already noted the team didn’t manage to get a good run of correct answers, the chaser ate her words following her crushing defeat.

“No you didn’t,” Bradley acknowledged. “Sometimes to win you have to take the lower offer, and this time it paid off.”

The Chase continues weekdays at 5pm on ITV.