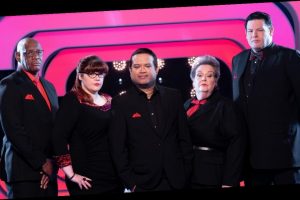 Quizzers on The Chase have warned they are now even tougher to beat thanks to lockdowns.

The TV geeks, including Paul Sinha and Mark Labbett, used 2020 to brush up on their general knowledge.

Paul Sinha, aka The Sinner-man, said: “In lockdown I’ve been quizzing non-stop. Mark and I have been competing against each other. I feel like my reflexes have sharpened.”

Mark, aka The Beast, added: “Paul and I have been training on the buzzer. If you’re not quick enough you don’t get the points. I feel sharper.”

The pair are back with a new series of Beat The Chasers, in which contestants take on all five of them for big money.

But the challengers are being warned the clan are even more determined.

Anne Hegerty, The Governess, said: “We always want to beat them.”

Shaun Wallace, aka The Dark Destroyer, added: “Our determination is to win every game.” And Jenny Ryan, aka The Vixen, said: “We want them to win even less now.”

Ahead of the Beat the Chasers return, the expert quizzers used the time afforded by the lockdown to perfect their general knowledge, meaning they are tougher than ever to beat.

No doubt, new Chaser Darragh Ennis – affectionately known as Ennis the Menace – will be taking note, determined to match his fellow quizzers on the show.

The Irishman, who works as a research scientist by day, was unveiled as the mystery sixth Chaser last year, tackling quiz fiends in the hot seat.

With Bradley Walsh returning as the host, Beat the Chasers takes the show to the next level, watching the panel of quizzers meet their match before a live TV audience.

If the Chasers are smarter than ever before, will they prove impossible to trump?

Beat The Chasers is on every night this week, starting on Sunday at 9pm on ITV.