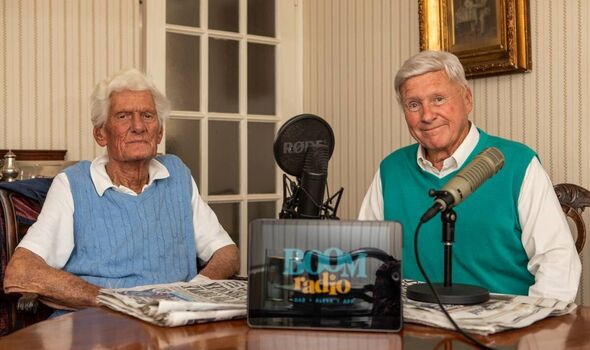 But becoming the oldest radio duo in history, while a nice footnote for the record books, is very much par for the course for Boom, which has carved out an enviable talent roster and listener base in less than two years. Veteran producers David Lloyd and Phil Riley launched the station – firmly aimed at the over-50s – in February last year with modest ambitions.

“The original plan was to carry it on digital radio in London first and, if that worked, then we would think about rolling it out nationally,” says David, 61.

Paul O’Grady, 67, is its latest star signing, confirmed for Boom’s Christmas Day show after 13 years at the BBC. The much-loved broadcaster quit his weekly Radio 2 Sunday programme in August after it was announced he would share his slot with comedian Rob Beckett, 36.

His move comes alongside other high-profile departures – Steve Wright, 68, Vanessa Feltz, 60 and Simon Mayo, 64 – from the national broadcaster. Some have left of their own accord, others have been bumped as the BBC chases, critics claim, a mythical younger audience, seemingly at the expense of older listeners.

The mass exodus of talent has clearly come at a cost. More than 108,000 over-50s deserted Radio 2 during the last quarter, as an extra 42,000 tuned into Boom, according to the most recent figures. All of which is good news for newcomers like Boom.

David and Phil are, of course, delighted.

“The policy of Boom is to provide a great radio station for disillusioned Radio 2 listeners,” declares David, while Phil believes O’Grady could prove a record breaker.

“If he can bring even a small percentage of his Radio 2 audience across, we’ll be very happy,” he says.

In anticipation, the pair have already had their technical team working overtime to ensure their streaming system can cope with a major audience boost.

At 69, Judi Spiers, of whom more shortly, is a relative spring chicken.

So apart from amassing decades of broadcasting experience and some famous names, what is it that Boom is getting right?

David says its listeners are treated as equals by presenters who are the same age but also feel young at heart.

“Our listeners know who Harold Wilson was, they remember entering the Common Market and mail order catalogues,” he smiles. “Whatever you’re talking about, we know our cultural references – the jokes are the same. For our audience, it’s like walking into a pub and gravitating to a table of old friends who can talk their language. That’s what people feel when they listen to us.”

David Hamilton, who broadcasts shows from his comfortable Sussex farmhouse with his cocker spaniel Amber at his feet, agrees.

“The other thing is that we play a really golden age of music,” he says in his familiar dulcet tones. “Everything The Beatles recorded was in the 1960s. It’s the best era of the Rolling Stones and probably the best for Motown. They’re three types of music that have lasted a long time.”

“Lots of other stations play the same records over and over again,” Hamilton says. “They have a narrow playlist because they’ve had these records researched and they feel that they’re safe.”

He began his radio broadcasting career in 1959 with the British Forces Network in Cologne during his national service and went on to work for the BBC for 20 years until he left for commercial radio in 1987.

“You’d struggle to find anyone who doesn’t know David Hamilton among our generation because he was on Radio One and Radio Two at the same time,” David Lloyd says.

“Everybody listened to him. He probably thought he was never going to be on the radio again, certainly not nationally.

“When we told him he could be on air from his attic, both he and his wife were utterly delighted. Certainly, his wife Dreena says this has changed David’s life.”

From the start, presenters had to broadcast from their homes because of the pandemic. This was not without its problems, says Judi, formerly of Pebble Mill fame, who joined Boom in August last year.

“When I was at Radio Two, I never pushed my own buttons. I was never trusted,” she laughs.

Having created an office at her Exeter home with screens and a microphone, she admits struggling to master the technology for her twice-weekly shows.

“In my first week, I was on the phone to David [Lloyd] five times in one hour,” she smiles. “To be fair, it was the anomalies of the system – but I am one of those awful people who will press any button when I don’t know what I’m doing.”

Listeners are thrilled to hear her back on national radio after a lengthy absence. Judi was axed from her mid-morning slot on BBC Radio Devon in 2015 after 15 years and had worked for the Corporation since 1991.

“I’ve had an enormous response on emails from people saying, ‘Oh my god, I wondered what had happened to you when you left Radio 2 or Pebble Mill. I used to listen to you all the time,’” she says.

Does she feel Auntie made the wrong decision, especially given the outpouring of love surrounding her comeback?

“Yes, they did because they lost a lot of listeners,” she says. “That’s not up for debate. I remember the day I announced it. The secretary who was taking calls in Plymouth was tearing her hair out saying, ‘I need help with these phones’. Our fax machine almost blew up. It overheated.”

Boom’s bosses are warm and friendly, she says, and there is no pressure.

“It’s nice to be with a station where people want to have fun,” she says.

“Where the boss is the boss. He doesn’t have to go and knock on another door and there’s not another layer of management who are going to come down and make changes.”

The level of expertise across the entire organisation ensures, the occasional home studio glitch aside, programmes run smoothly and effortlessly. More than half of listeners tune in via smartphones, computers and smart speakers.

Phil Riley is not surprised by the shift from digital radios. “Even with a DAB radio, you’ve still got to scroll past all the flipping BBC stations first whereas you can just ask Alexa to ‘play Boom Radio’.”

To reach its target of one million listeners next year, the station is ploughing profits back into a marketing drive. A second station – Boom Light – has launched for nonagenarians, playing music from the 1950s. Such swift success is impressive for a startup operating with a fraction of the budget available to larger brands.

Despite his decades of experience, David Hamilton never imagined he’d still be on the radio in his eighties.

“I work in a very insecure business where you can be dumped at the drop of a hat,” he says.

Back in the 1960s, he carried one of the first TV interviews with The Beatles. The following year, in 1964, he introduced The Rolling Stones on stage at Manchester’s Palace Theatre. But he paid the price for parking his red MGB sports car around the back.

“Somebody thought it was Mick Jagger’s car and scratched a love note on it,” he sighs. “So for a week, I was driving around with ‘I love you Mick’ on the bonnet.”

He’s looking forward to sharing many similar showbiz stories on Boxing Day when he teams up with his broadcasting hero Pete Murray, 97.

Pete will talk about his time as a pirate DJ on Radio Luxembourg and his memories of interviewing American jazz legend Nat King Cole, and showbiz star and acting royalty respectively, Harry Secombe and Tony Curtis.

All in all, Boom’s presenters are loving their comeback. One was in tears about returning to live radio. Another said they hadn’t had as much fun since their time on pirate radio.

“There’s something a little heretical about what we’re doing. We’re a group of friends with a dream, broadcasting from our own back bedrooms,” says David Lloyd.

“Many listeners have said we remind them of the pirates because, when they were young, there was nothing else on the radio for them – the BBC was a staid broadcaster.

“Now there’s a record station that plays their music so they have that same feeling of belonging they felt as a teenager.”