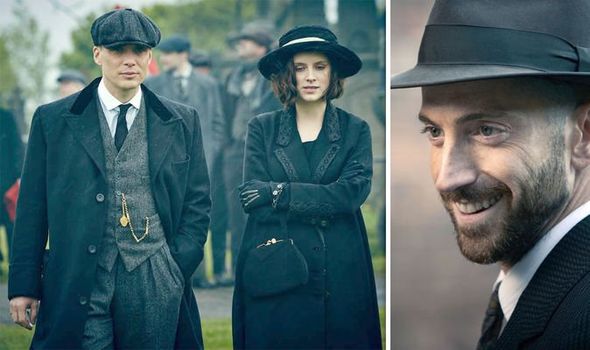 BBC series Peaky Blinders season six is now streaming on Netflix across the world and marks the final outing of the global phenomenon. The show provides fans with a resolution to the devastating season five cliffhanger. As the curtains fall on Peaky Blinders, many viewers are going back to the show for the first time. One question some fans have is what happened to Freddie Thorne and why did the actor Iddo Goldberg leave?

Freddie Thorne (Goldberg) was a big part of Peaky Blinders in season one after he and Ada Shelby (played by Sophie Rundle) were involved in a secret relationship.

Tommy Shelby (Cillian Murphy) was previously good friends with Freddie and the men fought side by side in the trenches during World War I.

However, Tommy and Freddie’s friendship deteriorated as he became a Communist agitator.

Ada and Freddie kept their romance a secret and were even forced to flee from the police during a raid.

The danger forced Freddie to leave town but not before Ada fell pregnant with their child.

Despite Aunt Polly’s (Helen McCrory) attempts to convince Ada to end the pregnancy, the young Shelby decided to keep her child.

Much to Ada’s relief, Freddie returned to Birmingham and reunited with her.

The couple swiftly got married and welcomed their son Karl into the world.

However, things didn’t last for the pair with Inspector Campbell (Sam Neill) applying pressure on Tommy to hand Freddie in.

Eventually, Freddie was arrested and thrown into prison with many thinking Tommy was the one who sold him out.

Tommy ended up engineering a breakout during a prison transfer, allowing Freddie to escape.

While it looked like Freddie was safe, at the start of season two it was confirmed he had died of the “pestilence”.

Ada and Tommy were presiding over his funeral as she mourned her husband.

Many fans have been left perplexed about why the character and actor left the show.

Unfortunately, it’s not clear why Freddie was written out or Goldberg left but it could just be a narrative decision.

Speaking to Collier in 2013 about Peaky Blinders, Goldberg said: “The world that they created, along with Steven Knight, who wrote it, was just so big and so grand.

“Usually, people cut corners and make things look bigger, but everything was just so grand and big and epic, on this production. It was great! It was just really, really brilliant.

“We weren’t doing it on a backlot. We were in the U.K., shooting in all these great locations up in Leeds. All the stuff just looked so authentic. It was really, really amazing. And then, you see the costumes.

“I’m sure you’ve heard this before from actors, but I’ve not had many experiences like it.”

He added: “Peaky Blinders is going to really be something. It was a real treat.”

Since working on Peaky Blinders, Goldberg has been in a number of big TV shows including Get Shorty, The Last Tycoon and Salem.

According to IMDb, he’s next going to be starring in Westworld season three and Snowpiercer.