Been on a rom-com bender and need to restock your supply? Netflix’s “Falling Inn Love” is here for you.

On Friday, the sweet comedy hits the streaming service, starring Christina Milian as Gabriella, a San Francisco workaholic who spontaneously enters a contest and wins a rustic New Zealand inn. Soon stuck with a money pit, she leans on a rather hot contractor named Jake (Adam Demos) to fix and flip it.

Actress/singer Milian, of course, is no stranger to the spotlight, but Demos, 34, is turning heads as her hunky love interest. Think you’ve seen the blue-eyed, blond star before? Read on for six things to know about Demos.

Demos, who grew up in Wollongong, New South Wales, still splits his time between Australia and the U.S. “I grew up in a smaller town. We didn’t even have drama at school,” says Demos. “It was very much a blue collar, construction-working, sports town.” It wasn’t until he was about 23 that Demos got up the courage to try acting. “I remember I called up my mum and said, ‘Can you Google acting classes?’ ”

Like his ‘Falling Inn’ character, Adam Demos used to be a contractor 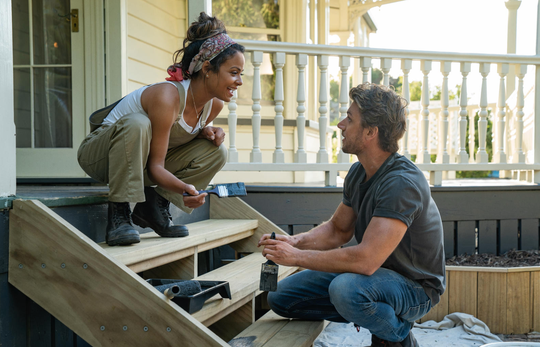 There's a good chance we can guess the ending to "Falling Inn Love." (Photo: NETFLIX)

Just like Jake, Demos knows how to swing a hammer. But the actor tempers expectations. “I’m handy enough,” he laughs. “For about 5 or 6 years I worked in construction. I’m not a builder so I don’t know if I’d trust myself to renovate an inn like Jake would. But I know how to knock things down, that’s for sure.” Where in the world would he choose to renovate an inn? “I’d like to try Alaska,” he says. “I’ve never been there before.”

Wait, where do you know him from?

Demos broke out on the third season of Lifetime’s scripted series “UnReal,” which imagines the drama behind the scenes of a “Bachelor”-type show. Demos play August, a pro-surfer humanitarian contestant on the show’s fictional dating series, “Everlasting.” But, um, he’d never actually go on reality TV to find love. “No, never,” says Demos, who returns to “UnReal” in Season 4. “I just like acting. It’s not about being in the public eye.”

He’s not not into romantic comedies

“I’m not against them whatsoever,” says Demos. “When they come on I’m not one to turn them off. They make you feel good.” He liked the script for “Falling Inn” because the characters make each other better. “It’s really nice to be challenged in life,” says Demos, who can’t quite get over the reach of a Netflix rom-com. “It’s quite crazy to see the impact it’s having. I’m definitely happy to be on the Netflix train.”

And he’s good with kids! Demos had fun hanging out with Milian’s 9-year-old daughter, Violet, on the far-flung New Zealand set of “Falling Inn.” “She’s such a champion. She would be on set all the time hanging out. It’s a credit to Christina, what a great mum she is to her.” (Milian is currently expecting her second child, a boy, with boyfriend Matt Pokora.)

And he’s down with oh-so-LA trends

Stalk his Instagram a bit and you’ll see everything from scenic hiking shots in New Zealand to his abs after a cryotherapy session. “The first green juices I’ve had were in LA,” says Demos, who likes to hike around Malibu on the weekends. “The first time I tried cryotherapy was here. And now I love cryotherapy! You feel so good after it. It’s two and a half minutes or three minutes. It’s cold but it doesn’t hurt. It’s a more aggressive version of a cold shower.”