The BBC Breakfast host hilariously mocked the RAF Corporal after showing viewers a clip of his Zoom call with Queen Elizabeth II. Noting how “elegant” the Monarch’s Zoom background was in the video call, Naga Munchetty asked Mr Stephens why he did not make “more of an effort” with his background as he appeared with a white wall behind him. The BBC host asked: “I’ve become obsessed with people’s backgrounds whenever we do these interviews now.

“So I saw the Queen’s background which was very impressive, very state-like, very elegant.

“Shanwayene, no offence, but why didn’t you make more of an effort with yours?”

Mr Stephens replied: “Well, I’m currently at home so I’m sat on my dining room table so unfortunately you just get the wall in the background.”

BBC co-host Dan Walker joked: “Your dining room table will do for us with the wall behind!” 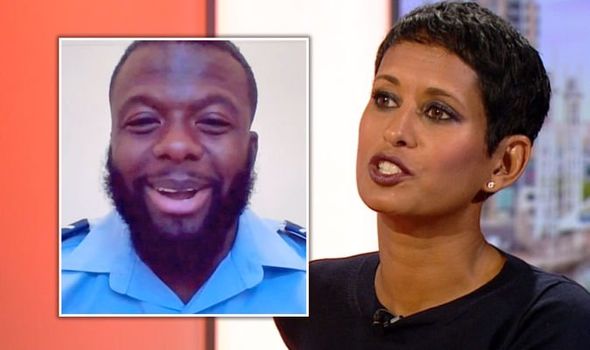 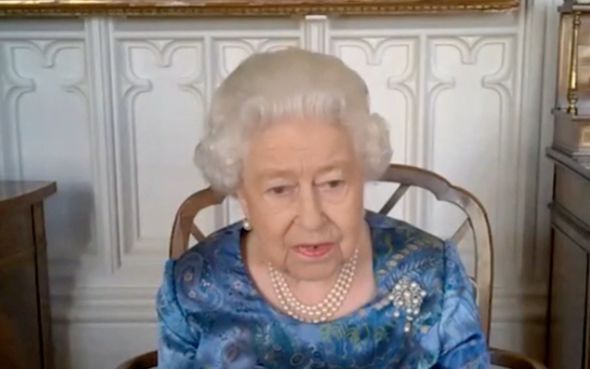 Asked if there were technical problems with the Zoom call with the Queen, he said: “No, she took to the technology really well, she was really relaxed.

“It made me relax even more to see how relaxed she was on the camera.”

The Queen was most amused after hearing about the RAF gunner’s unusual lockdown exercise regime of pushing a car up and down the streets.

The monarch remarked “Oh”, looked surprised and gave a chuckle when Lance Corporal Stephens, a member of the Jamaican bobsleigh team, told her how he had been using the method to keep fit.

“Well I suppose that’s one way to train,” the Queen added, laughing.

Her conversation with L/Cpl Stephens came as the Queen carried out her second official virtual royal engagement, holding a video call from Windsor Castle with members of the Armed Forces based across the globe.

The Queen had replied “Gosh. Sounds a very dangerous job” when L/Cpl Stephens told her he was the pilot of the Jamaican bobsleigh squad.

She asked: “So how do you train?”, prompting him to tell her about his unorthodox methods.

L/Cpl Stephens, of the Queen’s Colour Squadron, was one of three military personnel who spoke to the monarch last week as she heard about the work they were carrying out at home and overseas as the coronavirus crisis continues.

The Queen, whose sign-in name on the screen was “Windsor UK”, told them: “Everybody’s been extremely busy with the pandemic and doing a wonderful job.”

L/Cpl Stephens said afterwards: “She had a big smile on her face when I said about pushing the car.

“I think she was quite impressed with that.” 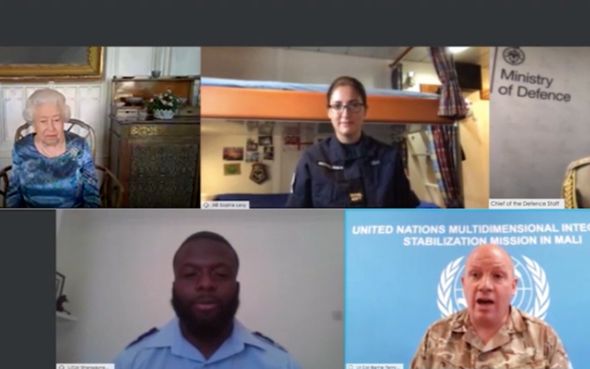 Asked if the Queen had backed his bid to compete at the 2022 Beijing Winter Olympics, he laughed and replied: “I’ll have to send her a T-shirt.”

Jamaica-born L/Cpl Stephens, who joined the RAF in 2011 and is based at RAF Northolt, is trained in forced protection with specialisation as a sniper.

The athlete made headlines during lockdown by pushing his fiancee Amy’s Mini Cooper around Peterborough to keep up his fitness.

With echoes of the 1993 film Cool Runnings, he also set up a temporary weights rack in his garden to train with his teammate Nimroy Turgott, who isolated with him when lockdown began in March.

L/Cpl Stephens said: “We had to come up with our own creative ways to get our training done to be ready for our competitive season which starts in November.”