‘Why shouldn’t it be cast that way?’: Yesterday breaks rom-com mould

Danny Boyle is standing on the roof of a sprawling, slightly down-at-heel hotel in Great Yarmouth in Suffolk, one of the many seaside towns in Britain that long ago lost their tourism mojo to more reliably sunny places just a cheap flight away.

As usual, the director of Trainspotting and Slumdog Millionaire looks fit to burst with sheer enthusiasm. “Wave to the camera, that’s all of you! Great stuff!” he shouts at the crowd of extras gathered on the beach below. “The camera is up here! So keep the noise going – you’ll be surprised how much it takes out of you, so don’t injure yourselves, but it’s a wonderful shot!” 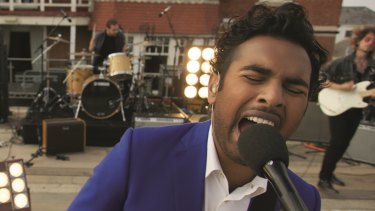 Jack Malik (Himesh Patel) wakes up in a world where the Beatles never existed in Yesterday.

We’re on the set of what will eventually be called Yesterday, a very British rom-com about a young man called Jack who wakes up after being knocked off his bike into a world that seems to have bits missing. Nobody has heard of Harry Potter, for example. A request for a Coke in a bar is met with blank incomprehension. Most importantly, the Beatles have never existed.

Jack Malik (newcomer Himesh Patel) has hitherto been a struggling singer-songwriter playing gigs in pub corners, mostly to his mates. Suddenly, he finds he is the only person in the world who knows the best pop songs ever written. All he has to do is remember the words to Eleanor Rigby and the orchestration to Strawberry Fields and he’s set for life.

The plan works. With a little help from his friends (sorry, but the film is sprinkled with these sorts of sidelong references) – particularly from Ellie (Lily James), his oldest friend, self-appointed manager and secret crush – he is able to record some Beatles songs.

They are instant hits. Hollywood, in the form of a viperous agent played by American comedian Kate McKinnon, scoops him up, makes him rich and ruins his life. By the time he comes to play the scene being shot today, he is seething with self-loathing; the abrasively punked-up version of Help! make the most of the lyrics that you realise, after all these years, are properly desperate. Help, he needs somebody. It seems so recently that he was younger, so much younger than today.

Yesterday is the work of Richard Curtis, 62. Like the Beatles before him, the author of Four Weddings and a Funeral, Notting Hill and television comedies going back to Blackadder and Mr Bean is a celebrated British cultural export. He is milling around the tent where cast and crew can go for a cup of tea, watching the slow business of filming and being self-deprecating in a Hugh-Grant-in-Notting-Hill sort of way.

“There was a depressing moment yesterday when Kate McKinnon was asked to improvise,” he says with faux gloom. “Everything she said was funnier than the lines I’d been working on for years.”

McKinnon denies this, of course. His dialogue is perfect; meanwhile, she feels she’s on summer camp when she compares it to her usual adrenalin-pumped job on Saturday Night Live. Time presses here, too, but in a different way. “People are British, so it’s a lot more polite.”

Yesterday isn’t Curtis’s idea – the world-without-Beatles concept came from a music supervisor called Nick Angel – but it hooked him immediately. The Fab Four’s songbook, he says, is hardwired into his head.

“I was obsessed by pop music from the first time I heard I Want to Hold Your Hand,” Curtis says. “I remember standing outside the Foresta hotel in Sweden waiting three days for the Beatles to come out on the balcony. I was seven. My sisters were older.

"I used to dream on my sisters’ birthday they would say, ‘What have you got me for my birthday?’ and I would open a cupboard and the Beatles would be in there. So I think there is an element here of storytelling as wish fulfilment.”

He had never met Boyle at the point when Tim Bevan at Working Title, which has produced all his films, asked him if he had any thoughts about who should direct this one. “And he said, ‘Well, funnily enough Danny Boyle’s just written me a letter saying, "It’s crazy, but we have both been working in parallel all these years and if you ever have anything you would like me to read then let me look at it”’,” says Bevan.

Curtis duly sent him Yesterday. “And Danny never actually said yes. He just started to pre-produce the movie so I figured that yes, that was easy.”

They are a surprising match: the crowned king of white-bread rom-com and the director who jump-started his career with a film about heroin addicts, one of whom is shown diving into a dirty toilet bowl. 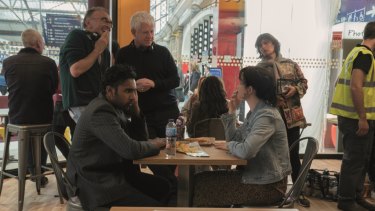 According to the film’s publicist, Boyle said when he read the script that Curtis could have the sweep of Great Yarmouth beach as long as he could turn the camera to show a nuclear power station at the end of it. (The power station is actually on another beach further south, but you get the point.) “Danny loves Richard’s work but felt he could bring something new to it,” says Bevan. “Also everyone’s so old they don’t need to fight one another any longer.“

Casting Patel in a role that had no specific ethnicity, he adds, was a stroke of genius on Boyle’s part. Patel spent last year doing theatre, but he got his start as a regular on TV soap Eastenders; this is his first film.

Not only could he play guitar and sing credible covers, but he broke the Four Weddings mould. “The whole Richard Curtis, Hugh Grant rom-com thing went away in one piece of casting,” says Bevan. “Which is great, so we have this fresh new film.”

Comedy regulars Sanjeev Bhaskar and Meera Syal, familiar to Australians as the Kumars at Number 42, play Jack’s parents. They are also married in real life and are inclined, charmingly, to finish each other’s thoughts. Bhaskar points out that the Beatles spent a lot of time in India, so making Jack Malik a British Asian is just squaring that circle. “And George Harrison was ‘our George’, wasn’t he?” Syal chips in. “His love of India made India love him.” 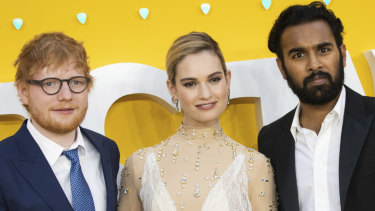 Singer Ed Sheeran (left) with actors Lily James and Himesh Patel at the premiere of Yesterday in London. Credit:AP

Bhaskar agrees. “But the Beatles belong to the world, really, although we claim them first and Liverpool claims them before anybody. The thing with both Danny and Richard in their writing is that they are storytellers and the fact that they’ve extended it to an Indian lead character is just a reflection of their storytelling. We live in a mixed world. People of colour are part of the society we all live in and until we accept they are everyone’s stories, they will always be other people’s stories.”

Perhaps nobody planned this, but that is a firebrand message to deliver on this beach. You do not see very many brown faces in Suffolk. We are not far from Nigel Farage’s former parliamentary seat; right here, the biggest slice of the vote in the recent European elections went to UKIP.

Syal pushes the point: this could be anybody’s story. “It’s really important to say that now when there’s so much fragmentation. When it’s all about the 'other'. That is the point about art – art is about empathy and our shared humanity and I think the things that make us all human. We all laugh and love and cry and bleed and have joy, so why shouldn’t it be cast that way?”

We catch Patel between takes, wearing a suit in a vivid royal blue that apparently alludes to clothes the Beatles wore to a press conference in Japan. Later I try to corroborate this online, but there are clearly things the buffs know that the internet doesn’t.

Stay out of the way of those Beatles nuts, I say.

“Why?” says Patel testily. “They’re going to be first in line, aren’t they?”

Performing live to 6000 people – the estimated number of volunteer extras gathered on the beach – is clearly making him too edgy to start pondering the significance of casting an Asian lead. Will his voice hold out through more takes of Help? Has he got enough soothing pineapple juice on hand? That’s the more immediate question.

This is Patel’s first film. As a rock star, he has to swagger. “Himesh has been unbelievable,” says the film’s musical director and composer Daniel Pemberton. “The weirdest thing is he is almost like Jack: he has come from nowhere to fill these insanely big shoes and he’s been fantastic.

"He started out as this quite quiet shy guy and in the space of two or three months you can see he’s a pop star.” 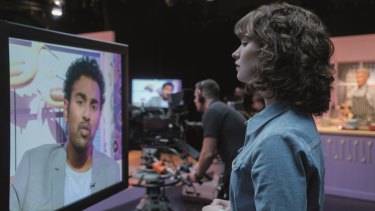 Himesh says he just tries not to think about it. “I’m having to fool myself into thinking it’s not a big deal when of course it is.”

There are long breaks between takes as the cameras are moved, the crowd shuffled, a helicopter is brought into play and some party-starting tracks are played over the loudspeakers to maintain the mass energy: Summer of ’69 cranks up. Inflatable toucans and tropical islands are handed out with a warning that they cost a lot of money, so don’t take them home.

Boyle explains to the crowd the principle of a reverse angle shot – “finally we do a shot of him, which is what you see; that is when we get that big black crane back in” – so they will go home having learnt something. “It’s a wonderful shot from up here!” he exclaims. “And we can replicate it and make it seem like there are even more of you!”

He’s a brilliant leader, Patel says. “But not someone who decides he has to lead with any sort of anger or arrogance or anything else. You never feel you’re working under him. You feel you are working with him. The way he talks about things is always ‘we’. This is our movie, we are doing this, we are doing that.” 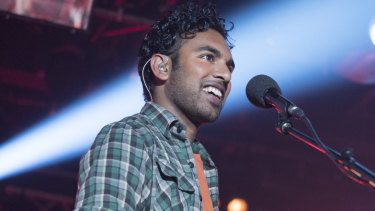 To see this inclusiveness extended to 6000 extras, some of whom are now accompanying Bryan Adams on air guitar, is inspiring. “He knows he needs the crowd to create what he needs to create,” says Patel. “And he doesn’t take that for granted, which is a really amazing thing to see.”

Lily James appears by the tents when Summer of ’69 strikes up and starts dancing with Curtis’s pink-haired daughter. The star of Cinderella wanted to make a Richard Curtis film; she has already freely admitted being able to mouth every word of Love, Actually, then gasps for joy when Fleetwood Mac rolls around on Boyle’s party tape.

“I think there is probably nothing better in the world than a huge group of people coming together to like enjoy and celebrate music,” she says. “It’s the closest I get to religion. I’m blown away by today.”

The crowd below, at a prompt from the first assistant director, lets out a collective roar. People wave their inflatables. All our troubles, as the song says, seem so far away.