In November of 2019, Baby Yoda took social media by storm. In just two short months, the little green creature was named the most Googled baby of 2019. Baby Yoda kicked out Baby Shark and even the Royal baby, Prince Archie, for the top spot. Now a new baby is threatening to take the cutest trend spot, and you won’t believe what it is. 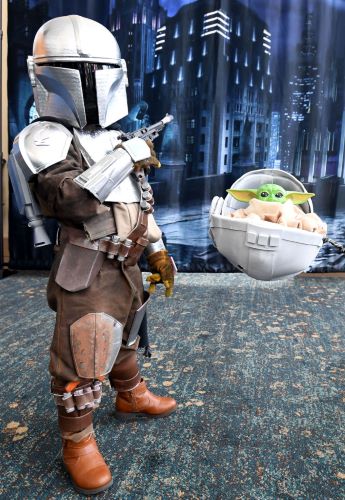 Where did Baby Yoda come from anyway?

Many people love the hysterical Baby Yoda memes on Twitter and Instagram; however, they don’t watch the show with the little creature. The most Googled baby of 2019 was a surprise ending to the new Star Wars series on Disney+, The Mandalorian.

The Child was kept under wraps so much that Disney was not even allowed to produce merchandise with its likeness. The series premiered right before the holidays, so it was shocking that there were no Baby Yoda plush dolls to purchase as presents. It seemed like the perfect marketing tool. However, Disney felt that the surprise twist was worth keeping a secret, even over the loss of merchandise sales.

Stream the series that has everyone talking. #TheMandalorian, only on #DisneyPlus.

Baby Yoda is not the infant version of the older Yoda we see in the Star Wars movies. He is of the same species, however, and he is already 50 years old. The nickname—Baby Yoda—is not entirely accurate, but the writer of the show, John Favreau, says he doesn’t mind that fans call it that.

What is threatening to take Baby Yoda’s spot as the cutest new trend on social media?

On Feb. 3, 2020, the United States Mint will release the National Park of American Samoa quarter. It doesn’t sound fascinating until you get a look at what’s on the back of it.

“The reverse (tails) design depicts a Samoan fruit bat mother hanging in a tree with her pup,” according to the U.S. Mint. The image evokes the remarkable care and energy that this species puts into their offspring.”

The adorable quarter was designed so that it might promote awareness of the threatened species. The Samoan fruit bat is in danger because of habitat loss from commercial hunting.

The National Park of American Samoa is a tropical rainforest southwest of Hawaii. It looks like a unique place to visit and take a hike.

What are users saying on social media about the new bat quarters?

“This is the only currency I intend to carry from now on,” tweeted one excited fan about the coin.

People are going batty over the new coin and insist that they find one as soon as it comes out.

“Only accepting payment in batcoin from now on,” tweeted another user.

Other users on social media love the play on words they created with how similar bitcoin sounds to ‘batcoin.’

“2020 is off to a rough start, but things will turn around in February when the bat quarters come out,” joked journalist Alana Massey.

We’re not sure if the baby fruit bat will top Baby Yoda as the most googled baby this year, but if people start making memes out of the little bat, it might be in the running.

believe, is, What, Won't, You
World News