Two people were killed and nearly two dozen others were hospitalized after a boat that was believed to have been used to smuggle illegal immigrants into the United States capsized Sunday just off the San Diego coast, authorities said.

Local lifeguards, the US Coast Guard and other agencies responded around 10:30am following reports of an overturned vessel near the peninsula of Point Loma, according to the San Diego Fire-Rescue Department.

Two patients died at the scene and 23 people were transported to hospitals, the department said in a statement.

Boats and aircraft were still searching around midday for other possible survivors in the water near the Cabrillo National Monument, the department said. 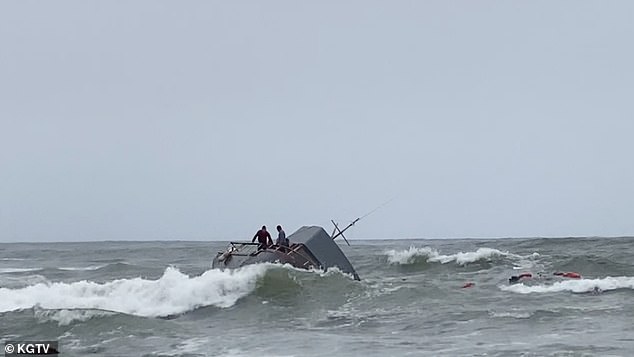 Since the vessel capsized in federal waters, the incident will be investigated by federal agencies.

According to reports, the vessel was a low-slung panga, a type of boat that is often used by smugglers to illegally transport migrants across the southern border.

Five of them were in ‘CPR status’ – meaning they were having trouble breathing.

DailyMail.com has reached out to Customs and Border Protection for comment.

On Friday, the CBP announced that federal law enforcement officials would beef up their maritime presence off the coast of San Diego to prevent attempts by smugglers to ferry undocumented migrants into the country.

‘All of these illegal crossings at sea are inherently dangerous, and we have seen too many turn from risky to tragic as smugglers sacrifice the safety of those on board for the sake of profits.’

CBP said that it boosted coastal patrols covering land, air, and sea in and around the Southern California region.

San Diego residents were warned that they would see an increased presence of law enforcement officials along the city’s beaches and marinas.

Locals were also informed that there would be a greater presence of helicopters in the air.

‘Interdictions of suspected human smuggling at sea are as much rescues as they are law enforcement operations. There is grave risk of capsizing, hypothermia, and drowning.’

Authorities said the boat had no navigation lights as it sailed at night some 11 miles off the coast of Point Loma.

Border agents said that the 21 people on board – 15 men and six women – were Mexican nationals who were illegally trying to enter the US.

Two of those on board the vessel, whom authorities suspect to be the smugglers, will face federal trafficking charges.

‘As a constant reminder to the public, if you see something out of the ordinary near the coast, don’t hesitate to call authorities,’ said Heitke.

‘These vessels are dangerously overloaded and unsafe in the ever-changing ocean conditions.

‘Smugglers exploit migrants and put lives in significant danger for their own profit.’