Sunday was a brutal day for the San Francisco 49ers.

The defending NFC champions scored a lopsided 31-13 win over the New York Jets. But they lost several key players to injuries in the process. Head coach Kyle Shanahan wasn’t pleased with the MetLife Stadium grounds crew.

Shanahan told reporters after the game that the turf played a role in multiple injuries.

“I don’t know exactly why it happened,” Shanahan said, per the Sacramento Bee. “As far as the feeling that was on the sidelines, that’s as many knee injuries and ankle stuff and people getting caught on the turf as I’ve ever been a part of. From what I saw, the other team did too.”

Shanahan said players raised concerns about the turf early and were worried about playing on it. The 49ers have to play again on the field next week in a game against the New York Giants.

“I know our players talked about it the entire game, just how sticky the turf was, and I think that was the first time people played on it, I think” Shanahan said. “But yeah, it was something our guys were concerned about right away. And the results definitely made that a lot stronger.

“Unfortunately this is a place we’ve got to go back to next week.”

According to Pro Football Talk, the league plans to “take a closer look” at the turf because of the 49ers concerns. 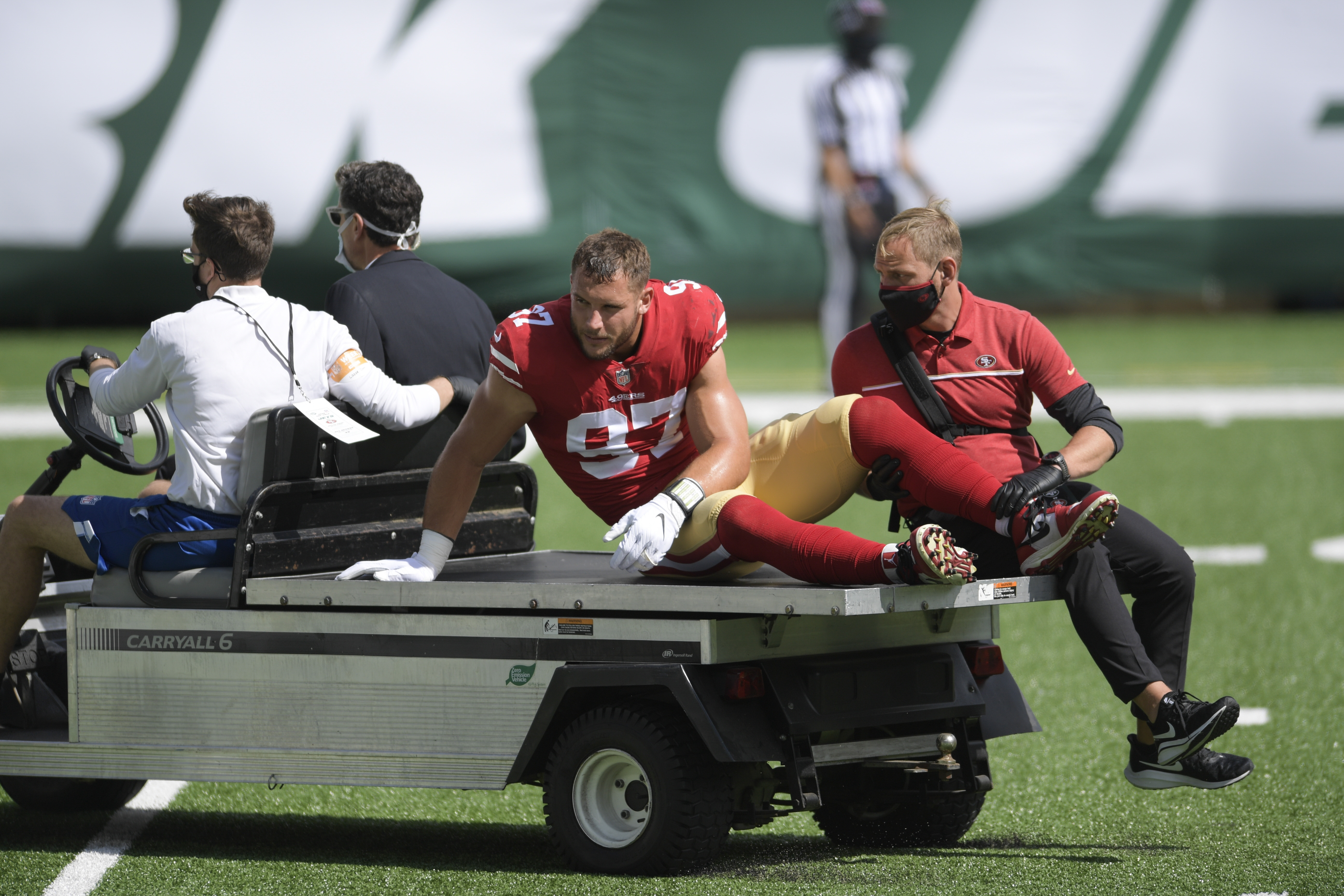 The injury report is a tough read for 49ers fans. Nick Bosa suffered a knee injury that’s feared to be an ACL tear. The pass rusher is coming off a Pro Bowl rookie season that saw him named the league’s Defensive Rookie of the Year. He was a popular preseason pick for Defensive Player of the Year.

Defensive end Solomon Thomas also injured his knee and is feared to have suffered a torn ACL, delivering another blow to the vaunted 49ers defensive front.

The San Francisco offense was not spared. Quarterback Jimmy Garoppolo suffered a high-ankle sprain and is expected to miss next week’s game against the Giants. Nick Mullens replaced him Sunday and will presumably get the start next week.

Starting running back Raheem Mostert suffered a knee injury that’s been initially diagnosed as an MCL sprain. He’ll have an MRI on Monday. He was in the midst of a second straight huge game as the 49ers’ primary back, highlighted by an 80-yard touchdown run clocked as the fastest run in an NFL game in five years.

The state of the field at MetLife stadium will be a big story next week as the hobbled 49ers play in New York for a second straight game.