550 people arrested as protesters demand water amid drought in India

Give us WATER! At least 550 people are arrested in India as desperate protesters say supply has been cut off amid drought and heatwaves

At least 550 people were arrested this week in India after demanding drinking water amid the country’s drought crisis.

Marchers were rounded up in the southern city of Coimbatore after they gathered outside the local government headquarters Wednesday demanding a delivery of fresh water at least every three or four days.

Tamil Nadu state, where Coimbatore is located, is suffering through an acute drought after light monsoon rains in 2018 combined with a heatwave this summer caused supplies to run low. 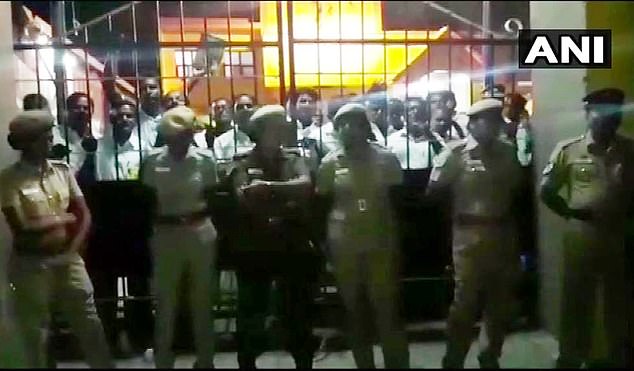 At least 550 people were arrested in the city of Coimbatore, India, on Wednesday when they took to the streets to demand a delivery of drinking water at least once every four days 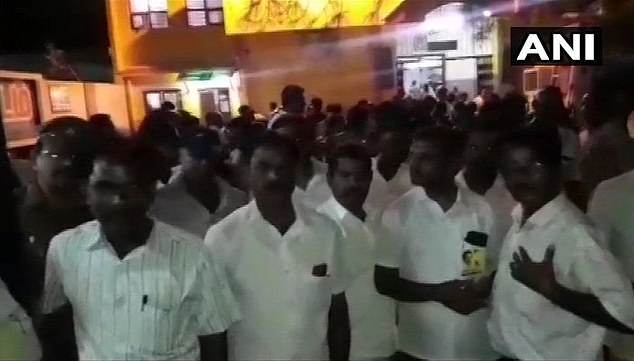 Protesters also called for the resignation of a local minister, accusing him of failing to prepare for drought, but were rounded up after police said they did not have permission to march

As a result millions of people have been forced to rely on water truck deliveries and filling containers of water with hand pumps.

In Coimbatore, protests were organised by political party DMK to demand better allocation of water resources after allegations of mismanagement by officials.

They also demanded the resignation of minister for municipal administration S P Velumani for failing to take measures to prevent the drought.

Marchers were met with police resistance after officers said they had not been granted permission for the march.

At least 550 people were arrested, though some reports put the number at 700.

They were detained at the town hall until 10.30pm, when they were released.

City officials later put out a statement which said all wards in the city are being supplied with water, though the frequency varies.

‘For 20 wards, drinking water is being supplied for four hour once in four to six days,’ a statement given to the Times of India said. 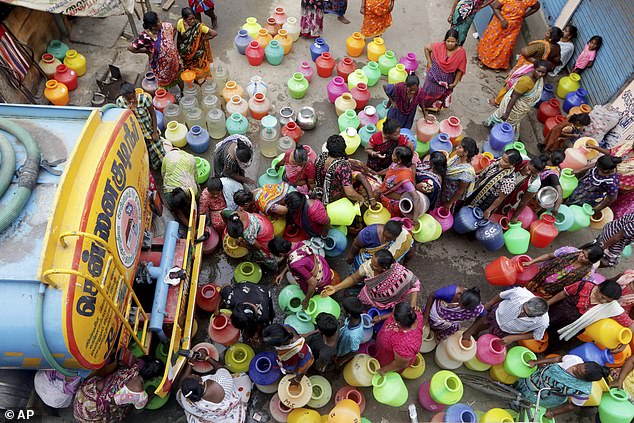 Tamil Nadu state, where Coimbatore is located, is suffering through an acute drought after light monsoon rains last year combined with a summer heatwave to reduce water supplies (pictured, people in state capital Chennai queue for water from a supply truck) 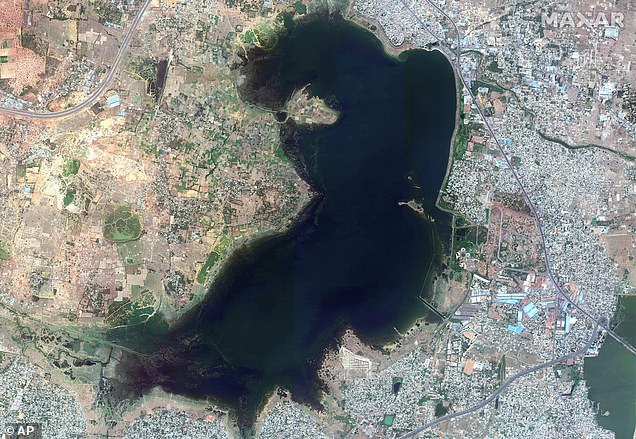 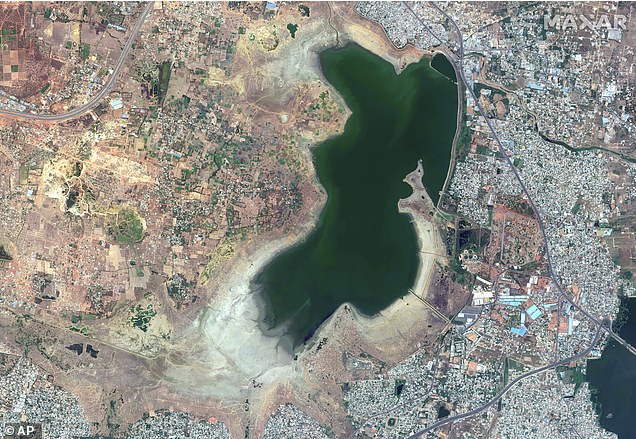 Four reservoirs that feed Chennai are running dangerously low and will likely not be refilled until November, when monsoons come back. Pictured left is the Puzhal reservoir on June 15 last year, and right is the same reservoir on April 6 this year

In Tamil Nadu’s largest city Chennai, home to 10million, four reservoirs that feed into the city have almost run dry.

Water in the Chembarambakkam Lake, which is around 15.5 miles (25 kilometers) from Chennai, has nearly vanished, and three other reservoirs that supply the area have also shrunk.

Some companies have asked employees to work from home. Some restaurants are closing early and even considering not serving lunch if the water scarcity worsens.

Only a fourth of Indian households are said to have drinking water at home, and about 200,000 people die each year due to inadequate supply or water contamination, a 2011 report stated.

Rains which refill the supply are not expected to arrive until November.

Chennai is India’s sixth-largest city and is a major destination for medical tourism, and Tamil Nadu state is a car manufacturing hub.

Northern and eastern India have experienced heatwaves with temperatures soaring to 48C (118F) amid a delayed monsoon.

At least 90 people have died due to heat stroke in the eastern state of Bihar since June, according to the state disaster management department.