A sickly circus of smugness hammier than a pork knuckle: HENRY DEEDES sees syrup swill around the Commons as John Bercow s-l-o-w-l-y says: ‘I quit’

There was affected angst, there was cod sentimentality galore and, of course, there were tears.

As they say over in theatre land: ‘My dear, what a range!’

The Speaker of the House of Commons announced his resignation yesterday – and what a sickly circus of smugness and self-satisfaction it turned out to be.

As spectacles go, it was a performance of pure Pooterism. Hammier than a pork knuckle. Amid the whistles and cheers which greeted the speech’s eventual conclusion, I half-expected bunches of gladioli to start landing on the Speaker’s chair. 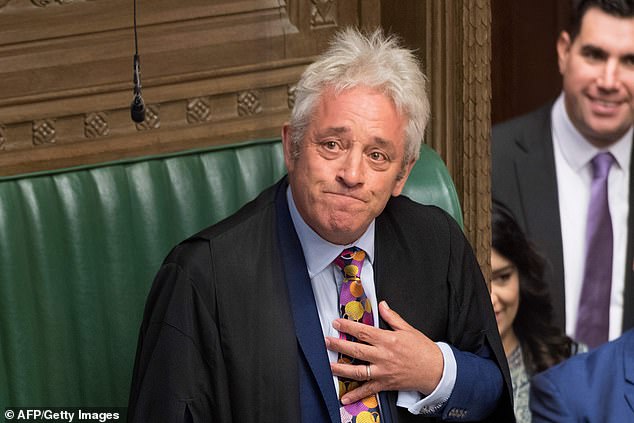 The applause, I should point out, came almost solely from the Opposition benches.

Barring a small clutch of MPs, those on the Government side sat on their paws.

Ten years they’ve put up with him, gleefully frustrating them at every turn. Finally, he was heading for the exit.

Word that the Speaker would be making an announcement had begun to circulate towards the end of a slightly sour session of education questions.

Up in the visitors’ gallery the Speaker’s wife, Sally, had already arrived and was looking glummer than a crematorium. Not surprised.

Think of all those juicy perks the Bercows are losing.

Shortly after 15.30, the Speaker was up on his trotters, those bulbous eyes giving the chamber a proprietary tour d’horizon. From my eyrie, I spotted Mrs Bercow sucking wind between her teeth trying to calm her nerves. ‘Colleagues, I would like to make a personal statement to the House,’ Bercow announced, that oddly affected Dickensian drawl plodding along at a maddeningly slow pace. ‘At the 2017 election, I promised my wife and children that it would be my last. This is a pledge that I intend to keep.’ 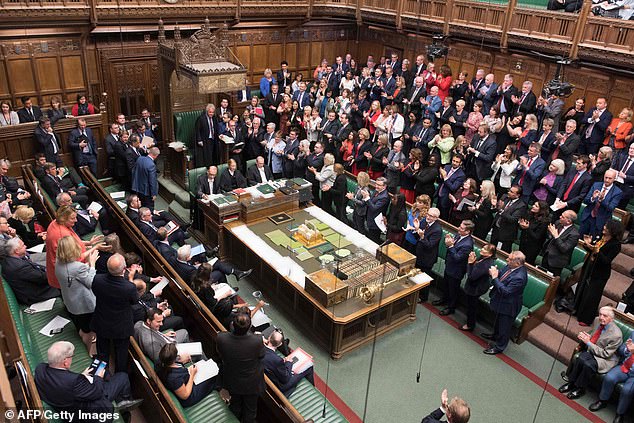 Paying tribute to himself, he boasted of giving more power to the backbenches.

‘The backbenchers’ backstop’ was how he described himself. Labour’s frontbench burst into sycophantic laughter. Bercow could tell a corny knock-knock gag and they’d still chortle along compliantly.

There were tributes to his staff, his constituents, to his wife and children. That last shout-out prompted his voice to go wobbly. Up in the Gods, Sally’s eyes were by now gushing like Niagara Falls. Down on the Government frontbench, ministers listened to Bercow’s self-flattery with a detached interest.

Dominic Raab had his angry cyborg face on. On and on it went. A short statement would have sufficed but this is not the Bercow way. He intended to squeeze every last droplet out of this moment.

‘This has been,’ he continued, stopping to examine an outstretched palm. For a moment I thought he was consulting a little crib sheet but no, this was a theatrical pause. You could almost hear the cello strings start up as he continued slowly: ‘Let me put this explicitly…the greatest privilege and honour of my professional life for which I will be eternally grateful.’

As he sat, Opposition members rose to their feet and applauded. What creeps they are. Bercow chewed his lip and nodded his head slowly in appreciation, though a rococo bow wouldn’t have felt out of place.

Over on the Conservative benches, David Lidington, David Morris and Sarah Newton stood. Otherwise stony silence. Then Jeremy Corbyn predictably turned the treacle hose up to max power. His verdict on Bercow? ‘A superb Speaker of the House.’ Michael Gove, speaking on behalf of the Government, gave a dignified speech praising the Speaker’s ‘commitment and principles’ – though he still looked relieved to be getting shot of him. 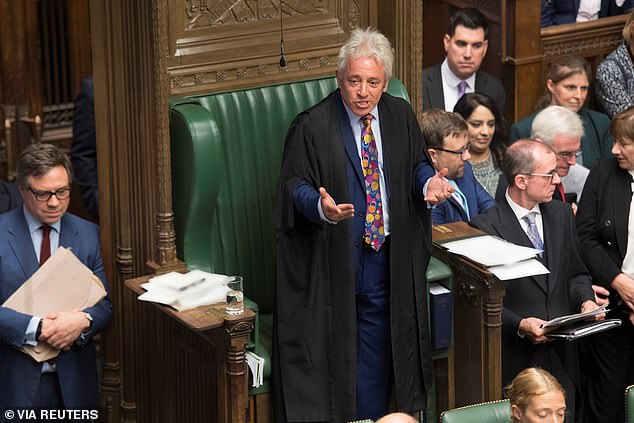 On and on it went. A short statement would have sufficed but this is not the Bercow way. He intended to squeeze every last droplet out of this moment

Syrup then swilled around the chamber. Hilary Benn, whose Remainer bill scuppered the Prime Minister’s prospects of a No Deal Brexit, said Bercow would go down in the history books as one of the ‘great reforming Speakers’.

Dominic Grieve praised him for standing up for backbenchers. Lib Dem leader Jo Swinson said her vote to elect Bercow Speaker was the most important one she had cast since becoming an MP. Puh-lease!

It all resembled an episode of This Is Your Life, except it was noticeable how light the tributes were on the personal.

We kept hearing about Bercow’s zeal for Parliamentary procedure, but little about the man. The Speaker, you feel, is feared round these parts rather than liked. 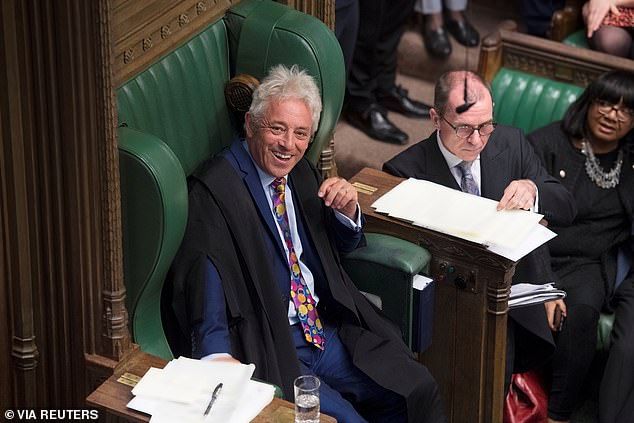 Dominic Grieve praised him for standing up for backbenchers. Lib Dem leader Jo Swinson said her vote to elect Bercow Speaker was the most important one she had cast since becoming an MP. Puh-lease

After an hour and a half of this saccharine slush, there was an emergency debate on prorogation. When trade minister Graham Stuart dared question Bercow’s decision to grant the debate, the Speaker threw a temper tantrum.

Red in face and loud in voice, he screamed: ‘I never have been, am not and never will be in the business of being bossed around by some footling member of the executive branch.’

A cry of ‘You’re a bully!’ came from across the chamber. Normal business had resumed.