A couple of jobs a shift: Ambulance fleet crippled by hospital overcrowding

Victoria’s paramedics are often attending only a couple of jobs a shift, as ambulance crews instead spend hours stuck at clogged emergency departments, according to unions and workers.

Paramedics told The Age some patients were waiting too long to receive urgent hospital care. They joined other emergency health workers in calling for widespread system reforms to address chronic hospital bed shortages, a key cause of ambulance ramping. 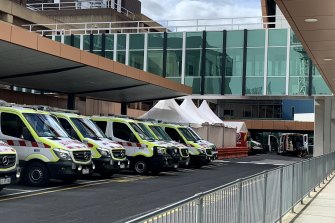 Victoria’s hospital system has been stretched for months. Credit:Jason South

“I don’t think throwing money purely at more paramedics is the answer,” one senior paramedic, not authorised to speak publicly, said.

At one point on Thursday night there were nine major Melbourne hospitals with significant ambulance ramping, with up to 22 crews ramped at Monash Medical Centre and long queues at the Northern, Frankston, Austin, Sunshine and the Royal Melbourne hospitals, the paramedic said.

They warned that very sick people including those who had had heart attacks were waiting longer than they should for a bed and said someone who’d had a stroke was ferried across town this week, as the ambulance crew was asked to bypass a hospital because they already had seven stroke patients waiting.

Another paramedic, who works in Melbourne’s western suburbs, said they recently attended just two cases in their first eight hours of a shift, and “that’s not unusual in the last couple of weeks”.

They described routinely waiting up to four hours in a room or corridor dedicated to ambulance triage. Other times, they said there was no room for them, and they queued outside or spilled into the airlock between the two doors at the hospital entrance.

“It’s a long way from ideal,” they said. “We have limited treatment options, we have very uncomfortable stretches … they’re in a crowded area, they’re at high risk of exposure to COVID.”

Recently, they said, they convinced a mental health patient to come to hospital, only for them to become increasingly angry after they had to wait to be seen. They were still there when the paramedic’s shift ended two hours later.

“They had put a bit of trust in me to come and get help that they really needed … Next time, they may not trust us to come.“

On Tuesday night Ambulance Victoria declared a code red for two hours when 99 per cent of the ambulance fleet was ramped at hospital or attending cases. Senior doctors and nurses emergency doctors told The Age that emergency department overcrowding was the worst it has been in years.

Australian Medical Association president Omar Khorshid said hospitals did not have capacity to cope with current demand. The nation was now facing a “perfect storm”, he said, the result of decades of underinvestment and an ageing population, along with a backlog of delayed care due to the pandemic and an expected winter flu and COVID-19 season.

Calls from the AMA and states to increase federal funding of the hospital system to 50 per cent went unheeded in this week’s budget.

“We’re in for a really tough period coming up and the budget didn’t address any of those issues, at all. Unfortunately, we are not seeing any vision from the Opposition either,” Dr Khorshid said.

“[You can’t just say] let’s build a new emergency department or a bigger one because that’ll be full in five minutes. What you need to do is look at the actual root cause of the problem.”

“It’s the fact that you can’t get people out of beds, that there’s not enough beds … that’s jamming up the emergency department and therefore when that’s jammed up, that leads to the ambulance ramping.“

A spokesperson for federal Health Minister Greg Hunt said hospital ramping was “a matter for the Victorian government”, adding that Commonwealth funding for Victorian hospitals had grown significantly more than the state’s funding since 2013.

In a bid to get paramedics back on the road, Ambulance Victoria is using its own dedicated teams based at hospitals to care for patients as they wait to be accepted by the hospital. The service also has hospital ambulance liaison officers stationed at 14 major Melbourne hospitals working with hospital staff to get patients offloaded more quickly.

Ambulance Victoria wouldn’t comment on the number of cases being attended to each shift on average. A spokeswoman said amid high demand for emergency care, the public could help by saving triple-0 for emergencies and consider a GP, pharmacist or Nurse-On-Call for less urgent health issues.

Victorian Ambulance Union secretary Danny Hill said he had recently received a briefing from Ambulance Victoria where he was told that ambulance crews were attending to about 2.2 cases a day.

This number was smaller than it should be, he said.

“Previously, crews may go to 10 cases in a single shift,” he said, explaining that this might include a number of minor incidents where people don’t need treatment.

“The paramedics themselves are actually saying they want to be more productive, and actually get out and do the work that they’re trained to do.

“When they’re at the hospital, they can hear over the radio of other cases going on … and they are not able to attend to them.“

Mr Hill said that highly skilled MICA paramedics, meant to be reserved for the most gravely ill, were being sent to less serious cases because there were no other ambulances available to respond to them.

Ambulance Employees Australia Victorian secretary Brett Adie reported that sometimes crews were waiting so long at hospitals that new staff had to be sent to relieve them.

“Then [they are] only getting to a couple of jobs during their shift as most of their shift is spent at hospital.”

But he stressed that this was happening before the pandemic, and the new challenges created by COVID-19 – including furloughing of staff – had just exacerbated existing problems, necessitating extraordinary coping measures.

One of these has involved deploying volunteers to fill shifts and drive ambulances.

The Age has previously reported patients have died after waiting to be accepted by hospitals after arriving in an ambulance.

In December last year, the last month data was publicly reported, almost 35 per cent of ambulance transfers to emergency departments were taking more than 40 minutes.

This week the Australasian College for Emergency Medicine called on the Victorian government to fix the root causes of ramping by delivering more in-patient beds and staff across the health system so that more help is available outside traditional business hours, not just in emergency departments.

“The Australian government also has a role to play in the solution to ramping in Victoria. Greater investment in the NDIS, aged care and mental health is required to ensure patients requiring these services can be discharged safely and promptly,” the college’s Victorian chair, Dr Mya Cubitt, said.

In response to questions about ramping, a Victorian government spokesman highlighted a $1.4 billion health package announced in February, including funding to support COVID-19 patients at home.