Have they lost their marbles? A horse’s head has been carved out of stone by a robot in a bid to make an entire replica of the Elgin sculptures

It is one of the most significant artworks of antiquity – a lifelike marble sculpture of a horse’s head which, 2,500 years ago, adorned the facade of the Parthenon in Athens.

The figure, known as Selene’s Stallion, is so revered that it was the inspiration for the knight chess piece used in international tournaments.

But the sculpture has also been a pawn in a diplomatic war of words, as the horse is a highlight of the Elgin Marbles in the British Museum – and the Greek government is demanding them back.

Now Selene’s Stallion has been given a leading role in the campaign for their return – hence the visually perfect copy pictured here. 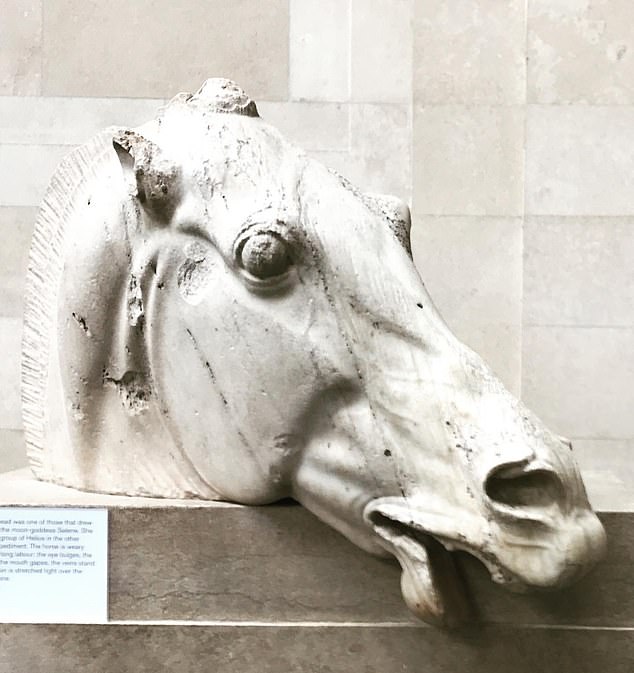 The figure, known as Selene’s Stallion, is currently on display at the British Museum and is so revered that it was the inspiration for the knight chess piece used in international tournaments. Pictured: The head of the horse with is part of the Parthenon Marbles 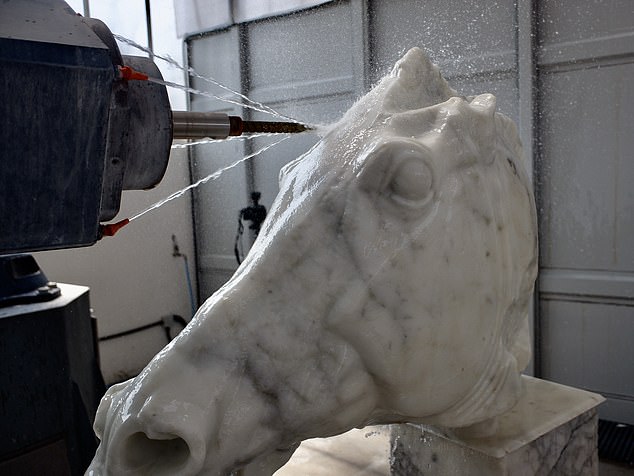 The prototype has been created by a robotic arm to convince the British Museum to relinquish the marble sculpture and return it to the Greek Government. Pictured: A trial piece is being practised on using a different type of marble than the original sculpture

It is a prototype for an entire replica set of Parthenon Sculptures, versions which are so exact that they could strengthen Greece’s case for the British Museum to relinquish its possession of the originals.

The idea is that the museum display the replicas instead.

The new stallion was made by a £250,000 robotic sculptor armed with metal chisels.

Said to have the strength of a bulldozer and the precision of a brain surgeon, the robotic arm shaped the marble far faster than any human sculptor could, and can carve a rough copy of the head in less than 24 hours.

The finished version took longer as every detail of the original, including flaws, chips, stains and chisel marks, was replicated.

The work took place at the Robotor workshop in Carrara, Tuscany.

Researchers from the Oxford-based Institute of Digital Archaeology have used technology incorporated into the latest iPads to scan the original statues in the British Museum for the robot to copy.

In fact, there will soon be two copies of the stallion: this test piece in Carrara marble, and a second using marble brought from what little is left at the quarry on Mount Pentelicus, just north of Athens, from where the original’s stone came. 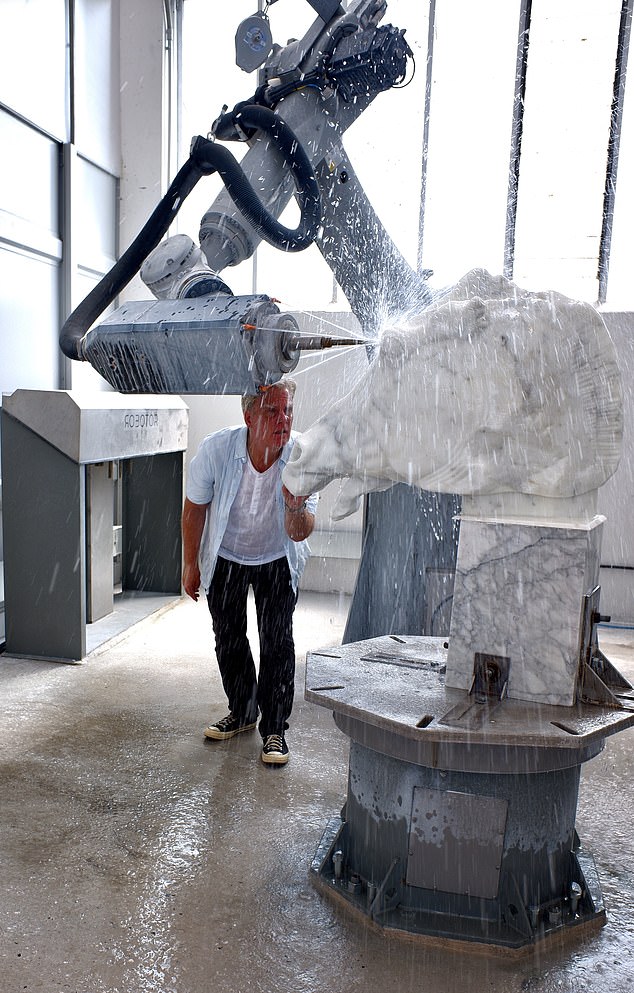 The finished version took longer as every detail of the original, including flaws, chips, stains and chisel marks, was replicated. Pictured: Roger Michel the director of the Oxford-based Institute of Digital Archaeology watches as the head is carved

Carving of the second head is due to begin tomorrow and is expected to take five days. Both replicas are soon to be exhibited in London.

The head of Selene’s Stallion was among dozens of sculptures and carved panels stripped by Thomas Bruce, the 7th Lord Elgin, who used his influence as British ambassador to the Ottoman Empire, which then occupied Athens, to ship them to Broomhall, his Scottish stately home, between 1802 and 1812.

Shortly after they were acquired from Elgin, British Museum staff tried to polish the sculptures back to what they incorrectly believed was their original pristine whiteness.

The Parthenon Marbles (pictured) are of symbolic importance to the Greek nation, so Athens remains adamant that the return of the originals is the only acceptable outcome to the talks

Roger Michel, director of the Oxford institute, believes that attitudes are already changing.

Former Chancellor George Osborne, who is now chairman of the British Museum’s trustees, said recently that there is ‘a deal to be done’ with the Greek government.

That could one day involve the British Museum returning the original Marbles to Athens and instead displaying perfect replicas as they would have appeared in antiquity.

Due to their symbolic importance to the Greek nation, Athens remains adamant that only the return of the originals, damaged as they are, would ever be acceptable.