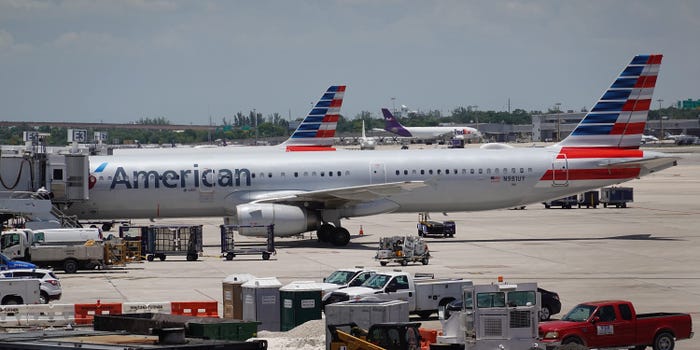 A Muslim influencer said she was booted from an American Airlines flight in New Jersey on Saturday because a white male passenger told agents he did not "feel comfortable" with her onboard.

Amani al-Khatahtbeh, an activist and the founder of a blog geared toward Muslim women, said in a Twitter thread that "an entitled white man" complained about her after a tense interaction while standing in line for airport security.

The man, whose identity is not yet known, was standing behind her when he "insisted on cutting me in line because I was 'still taking my shoes off,'" al-Khatahtbeh said in a tweet.

"When I said he could wait like everyone else, he started going off about how he's 'pre check' and 'first class,'" she added.

The man then pushed his luggage and shoes ahead of hers, al-Khatahtbeh said in a tweet, and then ran through the body-scanning machine.

"TSA did NOTHING," she wrote on Twitter. "Not only did they not do anything, a TSA officer had the audacity to tell ME to 'cut it out.'"

Al-Khatahtbeh wrote in a subsequent tweet that if she had behaved in the same way as the man's "temper tantrum," she would have faced retribution from security.

"Y'all know if I, a VEILED MUSLIM WOMAN, had the audacity to throw a temper tantrum and run through TSA security, I would have gotten BODIED," she added. "I would have been detained, missed my flight, possibly gotten charged, etc."

When she boarded the flight, she learned that the man had complained about her to an airline agent, she said. American Airlines then tried to remove her from the flight.

Al-Khatahtbeh posted a video to Twitter in which a man wearing a yellow American Airlines manager vest is saying he's going to remove her.

"The captain asked me, as a manager, for me to remove you from the aircraft because there's a passenger on board who doesn't feel comfortable with you being here," he said.

The manager is heard saying in the video that he was not there to witness the interaction between al-Khatahtbeh and the passenger.

She then told the manager she didn't feel comfortable with that passenger. "I want that passenger removed as well," she told him.

The manager told her they can "discuss that outside." The video does not show the passenger in reference.

Al-Khatahtbeh told Insider that the Council on American-Islamic Relations (CAIR), a Muslim rights nonprofit, has reached out to American Airlines on her behalf.

"Although we do not yet know all of the facts about this incident, we do know that American Airlines has a history of mistreating Muslim travelers," said CAIR National Executive Director Nihad Awad. "The airline must immediately explain why it singled out Amani by contacting the police and ejecting her from a flight based on the word of a man who had allegedly harassed her."

When reached for comment, a representative for American Airlines said the company investigating the incident and contacted both passengers.