Afghan witnesses can give evidence from abroad in Ben Roberts-Smith case: court

Four Afghan nationals who allegedly witnessed an incident in which a man was kicked off a cliff and shot dead by Australian soldiers will be allowed to give evidence from overseas in the defamation trial brought by SAS veteran Ben Roberts-Smith.

Mr Roberts-Smith, 42, is suing The Sydney Morning Herald, The Age and The Canberra Times over a series of stories published in 2018, which he says are defamatory because they portray him as someone who “broke the moral and legal rules of military engagement” and committed murder. 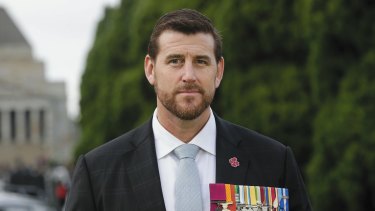 Mr Roberts-Smith argues the articles wrongly suggest that he disgraced his country and the Australian Army through his conduct overseas. He was deployed to Afghanistan six times between 2006 and 2012 as a soldier in the SAS.

The articles also portray him as a “hypocrite” who “abused a woman”, Mr Roberts-Smith argues, by detailing allegations that he punched a woman with whom he was having an affair.

In a defence, the newspapers have argued the articles do not convey the defamatory imputations pleaded by Mr Roberts-Smith and he is not identifiable in some of them.

However, if the Federal Court finds the articles did identify and defame him, the outlets have pleaded a defence of truth to all the claims, including alleging Mr Roberts-Smith was involved in unlawful killings in Afghanistan.

A trial, expected to take six to eight weeks, will begin in Sydney on June 7.

In a preliminary judgment on Thursday, Justice Anthony Besanko said he would allow four Afghan villagers and one person who has been posted overseas with the Australian Defence Force to give evidence in the proceedings remotely.

Justice Besanko said one witness was expected to give evidence that he saw his uncle, Ali Jan, get kicked off a cliff by Mr Roberts-Smith in September 2012 in the village of Darwan.

“He claims he saw the applicant kick Ali Jan off the small cliff,” Justice Besanko said in a judgment on Thursday.

“He claims that Ali Jan was then taken to a cornfield by two soldiers who were short in stature. He claims Ali Jan was shot by a soldier, although it is not actually clear from his outline that he saw this happen. He claims that when he saw Ali Jan’s body, he noticed he had been shot in the face.”

Three other witnesses who also lived in Darwan at the time are expected to give evidence that they saw or heard parts of the alleged incident.

A barrister for the newspapers previously told the court that it was “unlikely” the witnesses would be granted a visa to give evidence for various reasons, due to Afghanistan being in the top 10 countries for refugee applications and a risk of overstaying their visa.

Lawyers for Mr Roberts-Smith had argued that it would be “unworkable” for the witnesses to give evidence from overseas, because the proceedings involve sensitive national security information.

Justice Besanko found that “adequate” arrangements had been put in place to have the witnesses give evidence from a law firm in Afghanistan that had access to high-speed internet and other services.