Amid a worldwide chorus of condemnation, much of Africa has either pushed back or remained noticeably quiet.

Ugandan President Yoweri Museveni recently remarked that Russia’s war on Ukraine should be seen in the context of Moscow being the “center of gravity” for Eastern Europe.

His son, Lt. Gen. Muhoozi Kainerugaba, was more forceful, declaring that most Africans “support Russia’s stand in Ukraine” and “Putin is absolutely right!”

Amid a worldwide chorus of condemnation, much of Africa has either pushed back or remained noticeably quiet. Twenty-five of Africa’s 54 nations abstained or didn’t record a vote in the U.N. General Assembly resolution earlier this month condemning Russia. 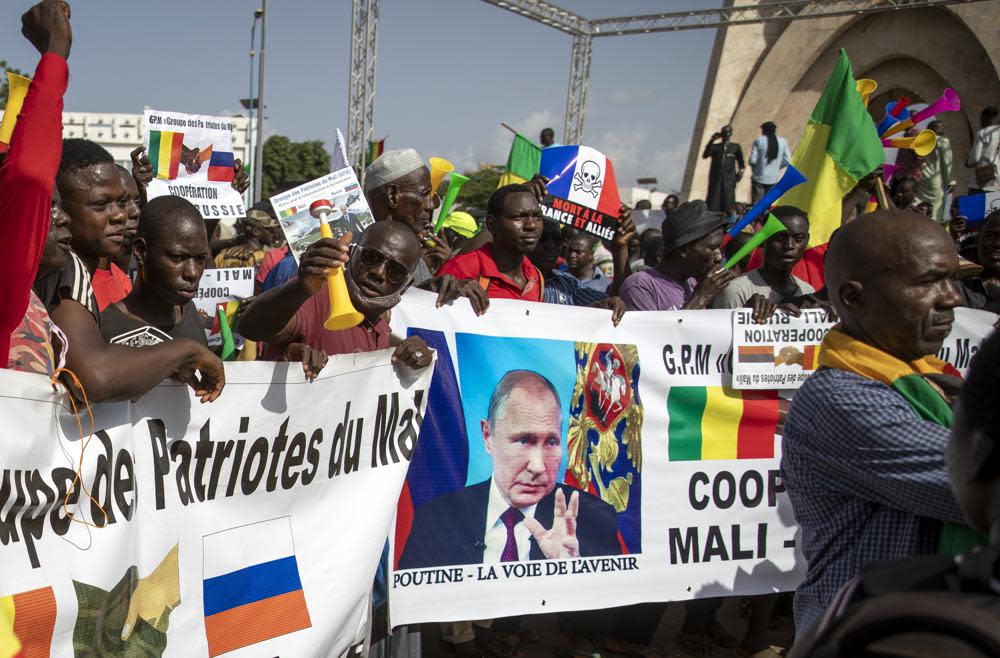 The reason? Many nations on the continent of 1.3 billion people have long-standing ties and support from Moscow, dating back to the Cold War when the Soviet Union supported anti-colonial struggles.

Those relations have tightened in recent years: As U.S. interest in Africa appeared to wane under President Donald Trump’s administration, Russia — along with China — expanded its influence, enlarging its economic footprint to include everything from agricultural programs to energy plants. In 2019, dignitaries from 43 African nations attended a summit with Russia, which also has become the dominant exporter of weapons into sub-Saharan Africa, according to the Stockholm International Peace Research Institute.

The developments have not gone unnoticed. Last month, European Union leaders held a long-delayed summit in Brussels to discuss ways to counteract Russia’s and China’s influence in Africa, while Western military and civilian leaders are eyeing Russia’s advancing presence on both the African continent and in the Middle East as long-term threats to security in the West. China also is among the few countries showing support for Moscow.

There have been exceptions to the current of sympathy running through Africa, with Kenya and Ghana criticizing Russia’s actions.

But, elsewhere on the continent, countries not only are abstaining from criticism, they appear to be celebrating their alliances with Russia.

As the war in Ukraine escalated, leaders of South Africa’s ruling African National Congress party attended an event at the Russian Embassy in Cape Town to mark the 30-year anniversary of the country’s diplomatic ties with the Russian Federation.

The ANC has ties to the Kremlin extending back to the Soviet Union’s diplomatic and military support of the struggle against apartheid, which Western powers did not provide. Some South Africans point out that Russia was not among the colonizers of Africa.

South African President Cyril Ramaphosa said his country abstained from the U.N. censure resolution because it failed to call for “meaningful engagement” with Russia.

“We have seen how, over time, countries have been invaded, wars have been launched over many years, and that has left devastation,” Ramaphosa told lawmakers Thursday, criticizing NATO’s expansion into Eastern Europe. “And some leaders of certain countries have been killed. On our own continent (Libya’s) Muammar Gadhafi was killed.”

He said he believes Russia feels “a national existential threat” from NATO.

Also abstaining from the U.N. vote was neighboring Zimbabwe, which had previously escaped sanctions of its own at the U.N. — for alleged human rights abuses and election corruption — thanks to vetoes by Russia and China.

Zimbabwean President Emmerson Mnangagwa has praised Russia and China as “dependable pillars,” citing the guns they provided and the training they gave fighters in the 1970s war against white minority rule in Rhodesia.

Russia has major investments in Zimbabwe, including a multibillion-dollar joint mining venture in the Great Dyke area, which holds one of the world’s largest deposits of platinum. Russia also is involved in gold and diamond mining operations in Zimbabwe.

In Uganda, where Russian officers regularly assist in the maintenance of military equipment, authorities recently announced the signing of a contract with a Russian firm to install tracking devices in vehicles to combat violent crime.

The East African country’s U.N. representative said Uganda abstained from the U.N. resolution on Russia to protect its neutrality as the next chair of the Non-Aligned Movement, a Cold War-era group of 120 member states that includes almost every African nation.

But President Museveni went further, actually meeting with the Russian ambassador as the war raged in Ukraine. The Ugandan leader, who has held power since 1986, has criticized the West’s “aggression against Africa.”

Museveni’s government in recent months has tangled with the U.S. and other countries that have expressed concern over last year’s disputed election and growing allegations of rights abuses. Museveni also has accused the West of interfering in domestic affairs, including through pressure to recognize LGBTQ rights.

Nicholas Sengoba, a columnist with Uganda’s Daily Monitor newspaper, said that many authoritarian African leaders like Museveni are pleased to see Putin “stand up to the big boys in the West.”

Following his meeting with the ambassador, Museveni urged Africans in a tweet to find what he called a “center of gravity,” which is what he said Russia is for “the Slavic nations of Eastern Europe.”

The post was later deleted, but his son Kainerugaba, who commands Uganda’s infantry forces, was unambiguous in his remarks on social media.

“The majority of mankind (that are non-white) support Russia’s stand in Ukraine,” he tweeted on Feb. 28. “Putin is absolutely right! When the USSR parked nuclear armed missiles in Cuba in 1962 the West was ready to blow up the world over it. Now when NATO does the same they expect Russia to do differently?”