Home » World News » After a long and locked down winter, can we find a way to celebrate grand final day?

After a long and locked down winter, can we find a way to celebrate grand final day?

The inbox at the Great Northern Hotel was running hot last Sunday afternoon.

Premier Daniel Andrews had just announced Melbourne could take its next step out of lockdown a week ahead of schedule and Melburnians, seizing on the dates, had one question for the Carlton North pub: Are you taking bookings for the grand final?

"We had about 80 emails," owner Alistair Carragher said. 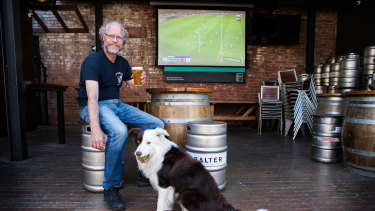 "[A staff member] spent the day putting them all in a pile as they came in and sending emails back: 'Hey, we’d love to accommodate this but a) we’re not sure if we'll be allowed to open or b) what the numbers might be'."

The uncertainty is spread among hospitality businesses desperate to reopen and a footy-loving public already deprived of an AFL season and the street-level colour and banter of finals.

After this long winter lockdown, can we look forward to at least a semblance of communal barracking on one of the most important days of the year?

Should the strong downward trend of COVID-19 continue, Chief Health Officer Brett Sutton said it was a "very decent chance" Melbourne would open for stage three by October 18 or 19 – in time for the October 24 grand final at Brisbane's Gabba.

People would be allowed to have a maximum of five people in their homes from one other household. Groups of 10 could meet in outdoor public places.

Pubs and restaurants could welcome 50 people seated outside, depending on space, and 10 people per indoor area to a maximum of 20 per establishment. Groups can't be larger than 10.

"To make it work properly you’d need more people indoors," Mr Carragher said. "But given something is better than nothing, if it was mostly outdoors we’d make it work, too.

"At the moment we’re taking levels of interest and waiting for directions from either Dan [Andrews] or the AHA [Australian Hotels Association]."

AHA Victoria president David Canny said many pubs would not find it viable to open for grand final day with the current caps on indoor dining.

"This whole outdoor thing just won’t work because it’s too weather dependent – there’s no planning that can go into that," he said.

"Our worry is that if pubs can’t do it – where we manage people well, where we manage the contact details – then it could lead to a disastrous outcome of people gathering in houses and celebrating grand final day. And this is where the thing spreads again."

Hawthorn's Glenferrie Hotel owner Mark O'Reilly said he needed 20 people per indoor space – the same capacity when restrictions were lifted the first time in June – to make a success of grand final day.

"We’ve got a strong COVID-19 plan in place and people would be seated," he said. "If pubs aren’t open, I don’t know how they’re going to control the house parties." 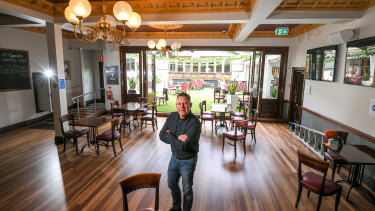 One bright spot, if you happen to live within five kilometres, is the Dromana Drive-In Cinema.

Pending the final tick of approval from the AFL, owner Paul Whitaker hopes to welcome as many as 500 carloads to watch the game on three big screens, repeating the success of the St Kilda v Western Bulldogs game in round two. 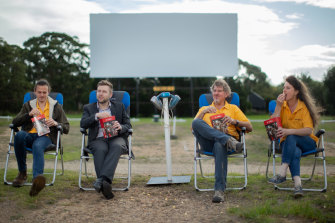 Dromana Drive-In is hoping to host a grand final event for 450 cars. The family business is run by (from left) Josh Whitaker, Chris Brayne, Paul Whitaker and Shelley Whitaker.Credit:Simon Schluter

"People came up after that game and said that was fantastic, like the old VFL days – all of us parked around the oval, tooting our horns and flashing our lights. The place was incredible," he said.

Grand final day would be a fully ticketed event at the cinema and every passenger would need to provide contact details, he said. Staff would monitor the toilets and provide sanitiser, while guests could order food delivered to their cars from the on-site kitchen.

"My father started the drive-in in 1962 and in the football season, especially the grand final, our attendance would drop right off, so to be in a situation where we’ve maybe got the only presentation in public, it’s absolutely incredible," he said.

The Andrews government, the City of Melbourne and the AFL could not list any COVID-safe ideas, potentially utilising Melbourne's outdoor spaces, that were even in tentative development. For now, that job has been left to businesses still waiting for the green light to open.

"Do you have any ideas?" asked Luca Sbardella, a director of King & Godfree on Lygon Street in Carlton.

The street is one of 16 precincts Melbourne City Council earmarked last week for alfresco dining on footpaths, streets and in parking spaces. While council chief executive Justin Hanney wants outdoor dining to "come to life" on grand final day, developing the precincts is likely to be a slow burn through the spring and summer. 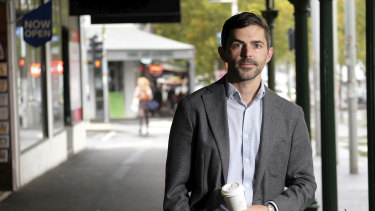 Mr Sbardella, who is also the president of traders group Carlton Inc, said it would be "amazing" if restaurants could pool in to arrange a projector and speakers to play the grand final, but this had its complications.

"Two things I’m worried about is obviously the Melbourne weather and, secondly, it’s human nature to gather. If there was football on how do you enforce that? You'd have to have police around.

"I’m trying to figure something out but I don’t know yet what we can do."