London: Amal Clooney has quit as a special envoy for the United Kingdom on media freedom over the British government's threat to renege on the Brexit deal it signed with the European Union less than 12 months ago.

Clooney wrote to Foreign Secretary Dominic Raab on Friday saying she was "dismayed" by the government's own admission that a bill it is passing through the Commons to override the agreement would be breaking international law. 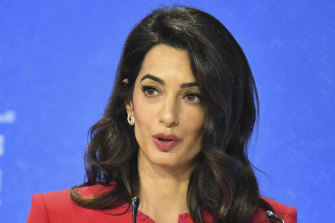 Human rights lawyer Amal Clooney said she was “dismayed” by the government’s actions.Credit:AP

"It is lamentable for the UK to be speaking of its intention to violate an international treaty signed by the Prime Minister less than a year ago," Clooney said.

The human rights lawyer with London's Doughty Street Chambers – which represents Julian Assange – said she had waited to discuss the matter with Raab directly before quitting, but had had "no alternative to resign" having received "no assurance that any change of position is imminent".

"I am disappointed to have to do so because I have always been proud of the UK's reputation as a champion of the international legal order, and of the culture of fair play for which it is known," she said.

"However, very sadly, it has now become untenable for me, as Special Envoy, to urge other states to respect and enforce international obligations while the UK declares that it does not intend to do so itself.

"It threatens to embolden autocratic regimes that violate international law with devastating consequences all over the world."

Clooney's departure is the latest in a string of resignations over Boris Johnson's controversial decision to walk away from the divorce deal the UK struck with Brussels in December 2019.

Britain fears the Withdrawal Agreement gives the EU powers over Northern Ireland, which is part of the UK and shares a border with Ireland, a member of the EU.

It is also concerned that the Agreement will prevent it from using state aid to subsidise homegrown companies and industries that it wants to champion after Brexit and as part of its post-pandemic recovery.

The government has put its Internal Market Bill into parliament and struck a deal with rebellious backbenchers to amend it, granting MPs a vote before the powers could be used to override the Brexit deal, which cabinet minister Brandon Lewis conceded would be breaking international law "in a very specific and limited way".

The government won an initial vote on the bill on Monday night and is likely to pass it through the Commons where it has an 80-seat majority, but the bill's fate is less clear in the House of Lords where the government does not hold a majority.

The unprecedented manoeuvre, which was condemned by top Democrats including the US Presidential candidate Joe Biden and House Speaker Nancy Pelosi, comes as crunch-time on trade negotiations between the EU and Britain looms.

Britain has said it is prepared to trade with the EU with no trade terms agreed rather than strike a bad deal. It formally leaves the single market at the end of the year.

Contests over fishing rights and state aid remain key sticking points. However, both sides have sounded more optimistic in recent weeks about the prospect of striking a deal before the October deadline that Johnson has set.

Negotiations resume in Brussels at the end of the month.