Australia’s Anglican church has split, and conservatives who oppose same-sex marriage have launched a breakaway movement led by former Sydney archbishop Glenn Davies aiming to lure Anglicans who are unhappy with progressive bishops.

The Diocese of the Southern Cross was formally launched in Canberra on Sunday. The first service was led by a rebel minister who resigned from the liberal Brisbane Archdiocese because he “cannot go along with same-sex blessings”. 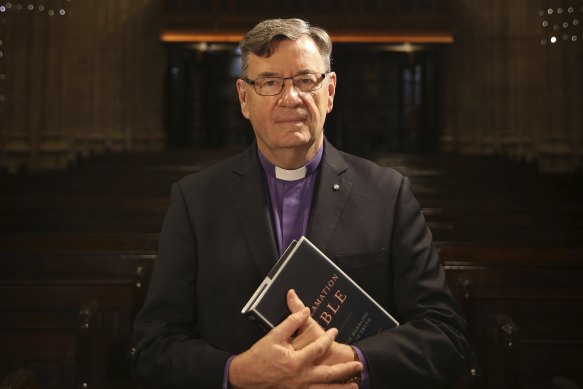 Davies, who finished his term as Sydney archbishop last year, said many Anglicans felt the Australian church had strayed from the teachings of the Bible, particularly on same-sex marriage. At present, they must move to another diocese if they disagree with their bishop.

But they can join the new church from anywhere – it will cover Australasia, including Papua New Guinea and New Zealand – and Davies expected many will do so. He is already speaking to ministers and lay people who are preparing to defect, but will not name them.

“I think you’ll see the Diocese of the Southern Cross will have a significant impact,” he said. “It will send shivers down the spines of some bishops in the Anglican Church of Australia.”

There have been many small, localised breakaway churches since the Diocese of Australia was first established in the 1830s, but never anything of such scope or involving such senior, consecrated members of the established church.

Women: Conservative Anglicans believe the bible gives men the role of  ‘elders’, so they are the only ones who can be ordained as a presbyter, or minister. Progressive dioceses allow women’s ordination as ministers.

Same-sex relationships: Some dioceses, such a Perth and Brisbane, are sympathetic to same-sex unions. Conservatives, such as Sydney, say the bible teaches that marriage should only be between a man and a woman.

Divorce: Conservative Anglicans believe ministers should be married. Other dioceses allow divorcees to be ordained.

Its social and theological conservatism – especially that marriage is only between a man and a woman – aligns with the views held by Sydney Anglicans, who are often described as the most theologically and socially conservative in the English-speaking world.

But other dioceses, such as Brisbane, Gippsland and Perth, hold different views. They ordain women and are open to blessing same-sex marriages. Most defections to the Diocese of the Southern Cross are likely to come from dioceses with progressive bishops.

The issue of same-sex marriage has led to similar splits in North America, Brazil and New Zealand.

The new church was registered with the charities commission in October. It will not be “in communion” with the archbishop of Canterbury, but will instead be aligned with the Global Anglican Future Conference (GAFCON), a group of conservative churches dominated by those from Africa.

Davies said the paperwork for the church was done ahead of the split, and the decision to proceed was made after a vote at the national Anglican synod (a church parliament) in May when a majority of bishops vetoed Sydney’s motion affirming that marriage was between a man and a woman.

The motion had had been supported by most of the lay and clergy representatives, and many argued the division showed that the bishops were out of touch with grassroots Anglicans.

“For those who cannot live under the liberal regime of a bishop, they can come and be thoroughly Anglican under a bishop,” said Davies, who will be commissioned as head of the breakaway church in Canberra on Thursday.

Matthew Anstey, a progressive Anglican theology academic from South Australia who argued in favour of blessing same-sex marriage at the synod, described the breakaway church as corrosive.

“They’re basically saying, ‘maybe your bishop is not a true Christian, you shouldn’t trust him or her, we’ve got the truth, we’re right’,” he said.

“They’re strongly implying that a lot of the rest of us aren’t even Christians. That’s what we find offensive.

“This is fundamentalism writ large. This is a split. How big it becomes, what shape it takes, how many join, we don’t know.”

In America, the division led to years of legal fights over church assets, which include schools and historic churches. The new church has no claim to existing assets as they are legally owned by individual dioceses within Anglican Church of Australia.

However, there may be tensions over property if there is a push from entire parishes to join the new church. Anstey believes both sides will try to avoid protracted legal battles. “This action may well be a catalyst for these kinds of conversations,” he said.

The new church is backed by Sydney Archdiocese and the Bishop of Tasmania, Richard Condie. “We are at an important moment in the history of the Anglican Church in Australia,” Condie said at the launch on Sunday. “You know as well as I do that there is an emergency.”

The charities register shows the three board members are Davies, Tasmanian minister Susan Willis, and lawyer David Baker, who is from St Jude’s Anglican Church in Melbourne.

When asked whether the new organisation would ordain women, a spokesman for Davies said, “those ministers who join will already have been in holy orders, so there will be no need for ordinations until after the first Synod of the diocese.”