Apple Daily, the last pro-democracy newspaper in Hong Kong and a powerful voice in the city’s political and social landscape for almost three decades, will close on Saturday, becoming the highest-profile media casualty of Hong Kong’s national security laws.

The newspaper had been raided twice by hundreds of Hong Kong police in the past 12 months, at least seven editors and executives have been arrested on suspicion of colluding with foreign forces, including billionaire owner Jimmy Lai. Its assets were frozen last week in a move that stopped the company’s ability to pay staff and suppliers, triggering mass resignations from staff who now fear for their own safety. 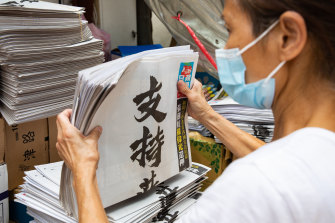 A newsagent arranges copies of the Apple Daily, with a front page advertisement voicing support for the newspaper on its 26th anniversary on Sunday.Credit:Bloomberg

The tabloid mixed entertainment gossip and occasional sensationalism with hard-hitting investigations and a fierce defence of Hong Kong’s civil liberties. Its editorial stance on calling for sanctions to be implemented on Hong Kong by foreign powers to stop the crackdown on the pro-democracy movement would land its editors and an opinion writer in jail.

In a statement released on Wednesday, the newspaper’s parent company Next Digital said due to the current circumstances in Hong Kong, the newspaper’s final edition would be published on Saturday, June 26 and the website would be shut down from midnight that day.

“The company thanks our readers for their loyal support and our journalists, staff and advertisers for their commitment over the past 26 years,” the board said in a statement. 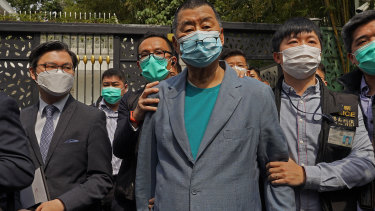 Jane Poon, a former editor Next Digital editor said staff who have just lost their jobs, colleagues and livelihoods still feared for their safety.

“They are still under a risk of prosecution,” she said. “The National Security Laws will trace after the articles released before the laws came into force.”

The laws, implemented by Beijing last year to quell more than 18 months of unrest over China’s rising influence, have seen dissent threatened with sentences of up to life in prison.