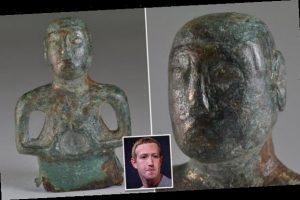 It’s a fashionable haircut favoured by the rich and famous.

But it looks like the skin fade’s popularity could stretch as far back as the in the first century AD.

Archaeologists discovered that a two inch high figure of a deity found on the Wimpole Estate, in Cambridgeshire, was sporting what appeared to be a popular hairstyle.

The tiny stone figure was originally found two years ago but its distinct hair, moustache and facial features were only noticed when it was thoroughly cleaned recently.

The figure, made from copper alloy, is thought to represent a god worshiped by early Britons. 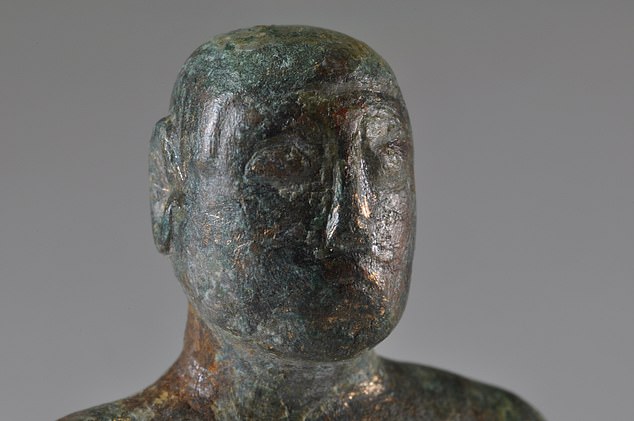 Archaeologists discovered that a two inch high figure of a deity found on the Wimpole Estate, in Cambridgeshire, was sporting what appeared to be a skin fade hair style 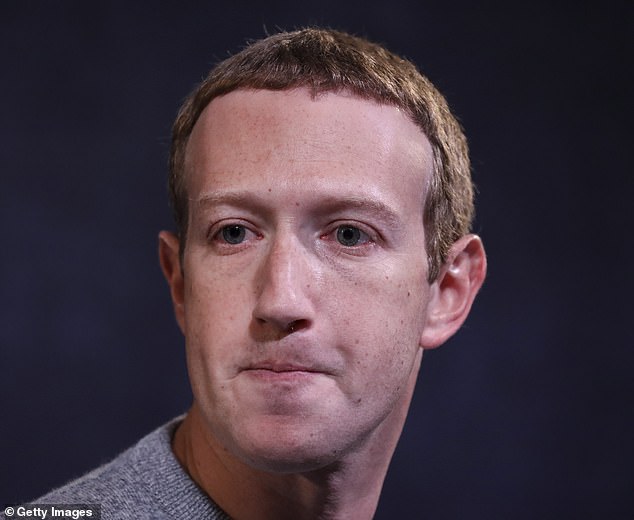 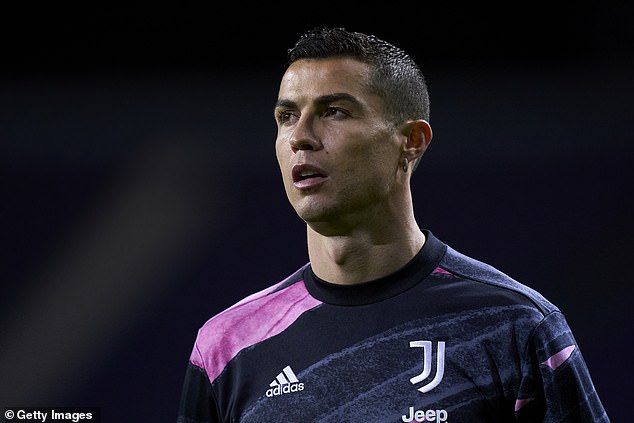 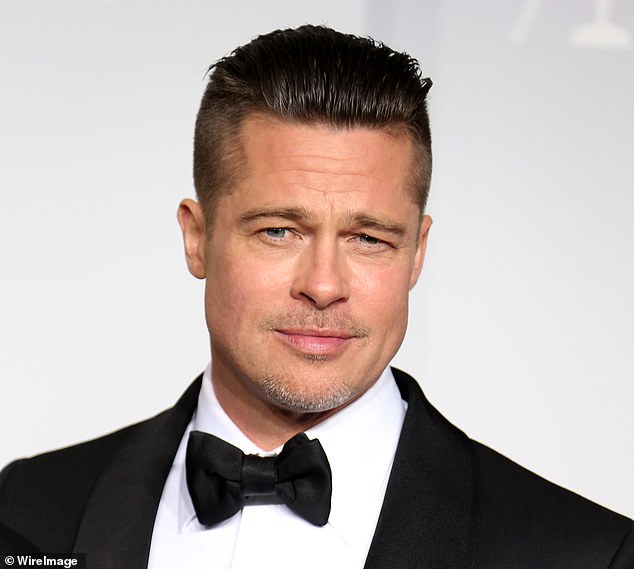 Prior to cleaning and research, it was suggested that it represented ‘Cernunnos’, the god of fertility.

The archaeologists were surprised by the detail which has survived on the figure after so long beneath the ground.

A tiny moustache is now clearly visible and the figure’s hair, which may represent 1st century trends or how the deity was normally shown, can be seen to be neatly shaped at the front and sides.

The figure was found after archaeologists from the National Trust and private firm Oxford Archaeology East carried out excavations on the Wimpole Estate in 2018.

The estate is the home of the country house Wimpole Hall, which is run by the trust and visited by thousands of Britons and tourists every year.

The archaeologists found a late Iron Age settlement which they believed was also lived on following the Roman invasion of Britain in AD 43. 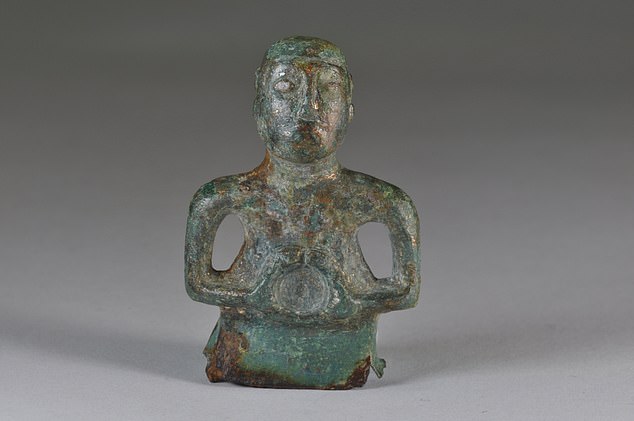 The tiny stone figure was originally found two years ago but its distinct hair, moustache and facial features were only noticed when it was thoroughly cleaned recently 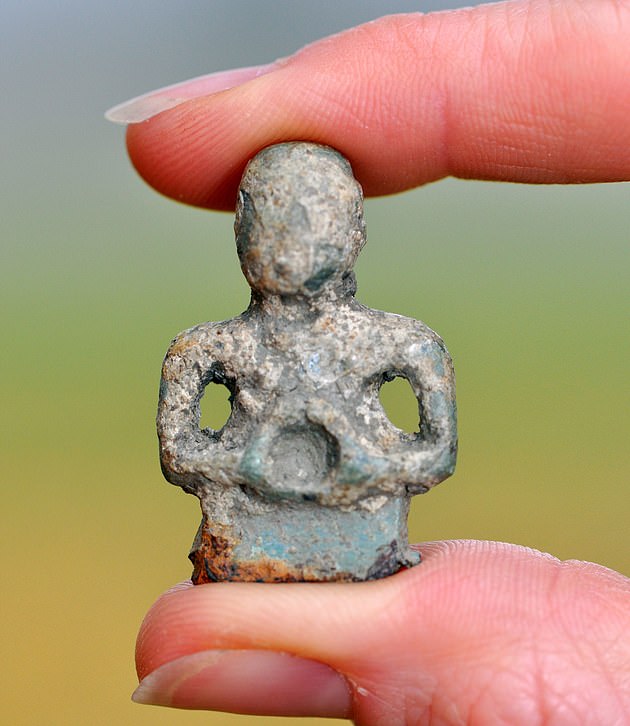 The figure is holding what is known as a torc – an open-ended metal neck ring. Pictured: The figure before it was cleaned

The Iron Age in Britain started as the Bronze Age finished. It started around 800BC and finished in 43AD when the Romans invaded.

As suggested by the name, this period saw large scale changes thanks to the introduction of iron working technology.

During this period the population of Britain probably exceeded one million. This was made possible by new forms of farming, such as the introduction of new varieties of barley and wheat.

The invention of the iron-tipped plough made cultivating crops in heavy clay soils possible for the first time.

Some of the major advances during included the introduction of the potter’s wheel, the lathe (used for woodworking) and rotary quern for grinding grain.

There are nearly 3,000 Iron Age hill forts in the UK. Some were used as permanent settlements, others were used as sites for gatherings, trade and religious activities.

At the time most people were living in small farmsteads with extended families. The standard house was a roundhouse, made of timber or stone with a thatch or turf roof.

Burial practices were varied but it seems most people were disposed of by ‘excarnation’ – meaning they were left deliberately exposed. There are also some bog bodies preserved from this period, which show evidence of violent deaths in the form of ritual and sacrificial killing.

Towards the end of this period there was increasing Roman influence from the western Mediterranean and southern France. It seems that before the Roman conquest of England in 43AD they had already established connections with lots of tribes and could have exerted a degree of political influence.

After 43AD all of Wales and England below Hadrian’s Wall became part of the Roman empire, while Iron Age life in Scotland and Ireland continued for longer.

Shannon Hogan, National Trust Archaeologist for the East of England, said: ‘This figure is an exceptional find and thanks to careful conservation and cleaning, we can now see some remarkable detail.

‘His hairstyle and moustache are clear, which might be indicative of current trends or perhaps ‘typical’ for depictions of this particular deity.

She said that while the figure may have been made by the Romans, it shows ‘very Celtic traits’ such as oval eyes.

The figure is holding what is known as a torc – an open-ended metal neck ring.

Ms Hogan added: ‘We have extremely limited knowledge of what ordinary people of England at that time looked like, so this beautifully detailed figure might just be giving us a tantalising glimpse into their appearance, or how they imagined their gods.’

The figure was probably originally served as the handle of a spatula.

It may have been lost or deposited at Wimpole by inhabitants of early Roman Britain at the end of the Iron Age.

Experts said it is a reminder of the ways in which the indigenous Celtic religion shared features with the Roman religion during the Roman occupation of Britain, which lasted until AD 410.

Both systems of worship were pagan, meaning they had multiple deities responsible for different aspects of daily life.

Chris Thatcher from Oxford East Archaeology added: ‘Finds such as this give a rare and fascinating insight into aesthetics and symbolism in the latest Iron Age.

‘The extent to which his hairstyle is typical of contemporary styles will never be known for certain.

‘However, we think the combination of him holding a torc – associated with status – and forming the handle of a spatula – either used to mix medicines, or wax for writing tablets – speak of influence and power.

‘The fact that he was found on a site with so much other evidence for it being a local hub is wonderful and appropriate.’

Speaking of the settlement found at Wimpole, Mr Thatcher said what they discovered ‘surpassed their expectations’.

‘The settlement is believed to have been at the centre of a strong trading network, with imported pottery as well as around 300 metal objects uncovered during the dig,’ he said.