Home » World News » Are you smarter than a 12th grader? Try your hand at some of the hardest ATAR exam questions

Are you smarter than a 12th grader? Try your hand at some of the hardest ATAR exam questions

Thousands of year 12 students across Western Australia have now logged on and checked their ATAR results.

The formulas and equations students faced this year in chemistry, physics and maths exams would leave many people with a headache. 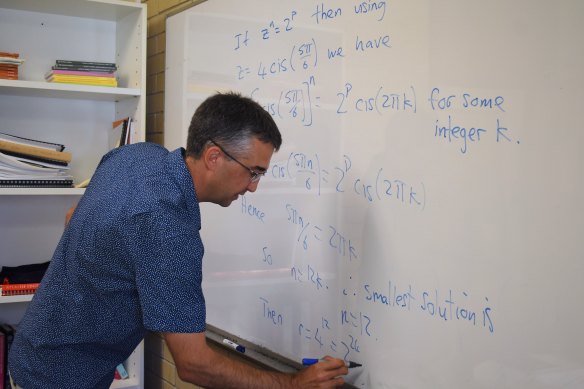 Professor Giudici explains how to answer a tough question from the 2022 maths specialist WACE exam.Credit:Holly Thompson

Professor Michael Giudici, from the University of Western Australia’s school of physics, maths and computing, took a look at two of this year’s questions from the maths specialist exam.

He said both were related to complex numbers but one of them was especially challenging, and that he would not be surprised if 60 per cent of the students could not answer it.

“When you set an exam paper you’ve got to have enough reasonable questions there so the students who should pass do, and then you’ve also got to have questions where bright students can demonstrate that extended ability which separates them from the rest,” he said.

“You need to really understand what’s going on to answer this question, it is definitely leaning towards the tricky side.”

On average, students only received 24.17 per cent of the possible marks for this question, shown below.

The second question, Giudici said, was easier and required an explanation of the theory involved.

“This question is a theory question really, which is testing what you know about solutions of equations, how many solutions an equation should have, and interpreting the solutions and equation in terms of the behaviour of the associated curves,” he said.

“I think this is a good question. It’s testing if the students really understand the principles behind the mathematics that they are learning.

“I’m a little bit surprised by the mean mark given here [24.44 per cent], I would have hoped it would be a lot higher.”

Giudici said there was a growing trend where students who were aiming to study maths-heavy university courses were choosing a lower level of maths than they were capable of in high school to maximise their ATAR score, and then doing a bridging unit at university.

“The problem with this is that you are condensing what could have been two years’ worth of study into six months, in a university environment instead of in the support of a high school class,” he said.

“In my opinion, these students should take the harder maths even if it slightly lowers their ATAR. They will find it better in the long run.”

Try your hand at a physics and chemistry question below.

On average, students achieved 56.94 per cent of total possible marks in part A and 31.3 per cent in part B.

On average students received 31.89 per cent of possible marks for this question.