An armed gang who used a stun gun to rob a £100,000 watch from a group of American tourists in Chelsea face jail after admitting the attack.

Thomas Lenaghan, 23, and Ronnie Fitzgerald, 20, hid their faces in balaclavas to target three men walking on Pavilion Road just after midnight on November 16.

One of their victims, 31, was pushed to the floor and hit from behind by a stun gun.

He was surrounded as it was demanded he hand over his Rolex watch, worth around £100,000.

His father was threatened with a knife, which cut through his coat but did not cause injury, as he tried to stop the attack.

Their friend was also threatened with a stun gun and forced to hand over her watch, worth around £200 before the suspects got into a waiting car and sped off. 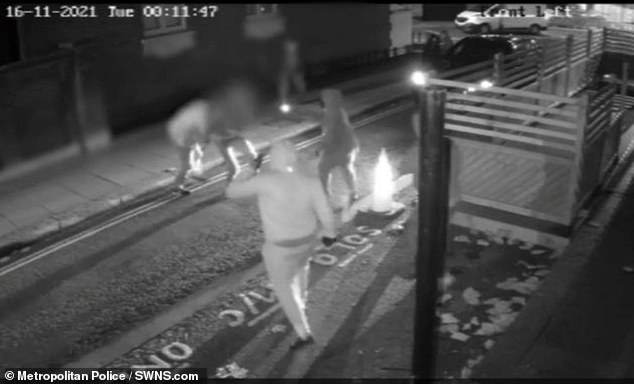 CCTV footage released by the Metropolitan Police showed the moment two of the gang stole a £100,000 Rolex watch and cash from a group of tourists in Chelsea in November last year 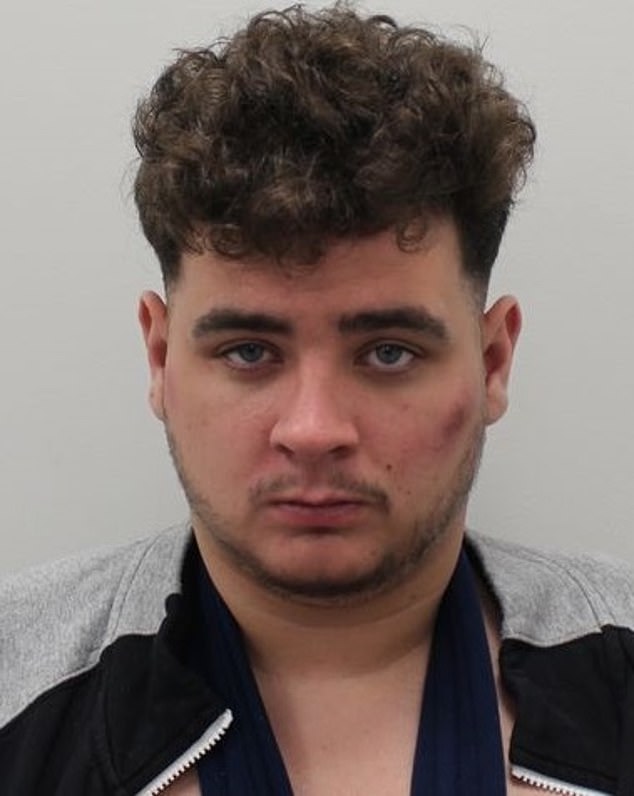 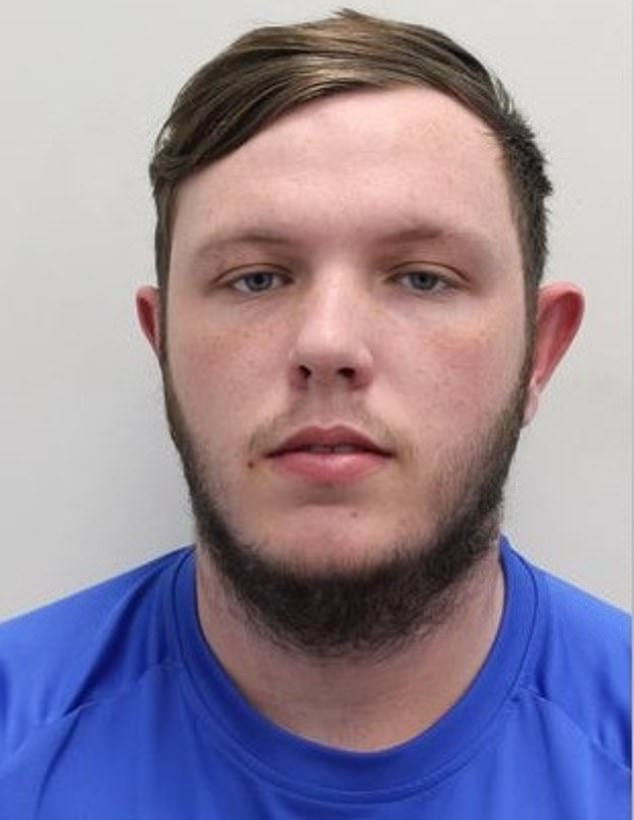 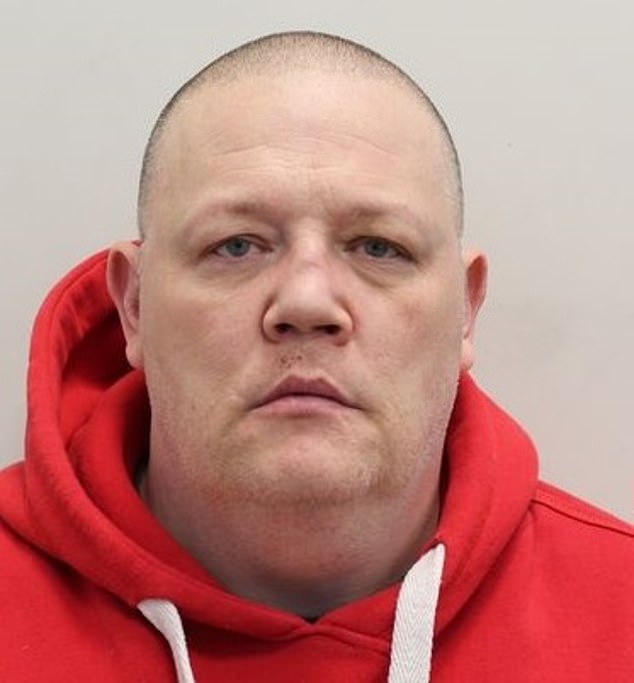 John Stovell, 50, pleaded guilty to handling stolen goods and assisting an offender and all three will be sentenced on December 9.

DC Robert Rodak, who worked on the investigation, said outside: ‘This was a shocking and violent robbery which understandably left the victims shaken and feeling incredibly fortunate they did not suffer more serious injury.

‘Everyone should be able to walk through our streets unaffected by this type of crime and that is why we are doing everything we can to take offenders like Lenaghan, Fitzgerald and Stovell off our streets.

‘This conviction was a result of a joint effort where our local team was assisted by the specialist skills of the Flying Squad to catch those responsible. Working together we will continue to target and relentlessly pursue robbers who commit violent crime in London.’

Although the attack was caught on CCTV and mobile phones, those responsible were not identifiable as they had their faces covered and wore generic clothing

The car they were using, a Jaguar F-PACE, was stolen and displaying false plates, meaning it also proved difficult to identify and track down. 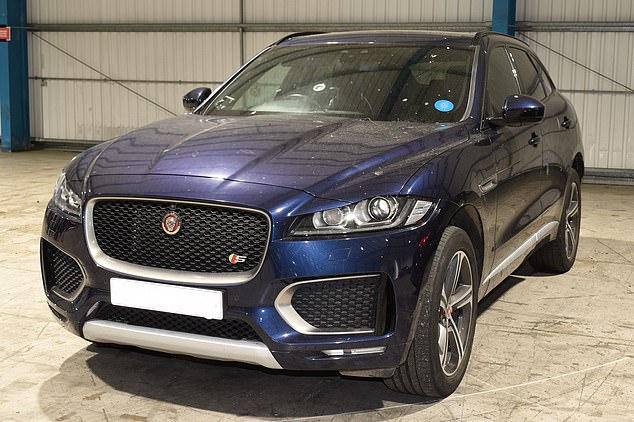 Police said a breakthrough in the case came when they were able to identify the getaway car, which was stolen and using false plates

Detectives from the Met’s Flying Squad painstakingly analysed the footage and managed to see that the car had a small sticker on the bottom right corner of its windshield.

They then worked through crime records to find out how many Jaguar F-PACEs had been reported stolen and remained unrecovered in recent months, leaving them with 30-40 possible vehicles.

The team contacted each owner and ascertained if any of their cars had any particular identifying features.

One told officers that their car had a parking permit for their child’s school – a description which matched the sticker seen on the car used in the robbery.

This was the breakthrough moment the team had been looking for as it allowed them to discover the car’s true ‘identity’.

From there, they were able to work out where the car had been prior to and after the robbery and explore further CCTV opportunities, leading to footage capturing the robbers meeting without masks.

The photos of their faces were circulated and led to the identification of Lenaghan, Stovell and Fitzgerald. 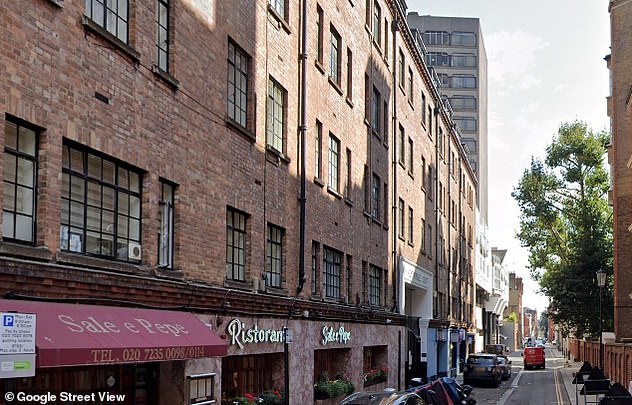 The attack happened on Pavilion Road in Knightsbridge, just metres away from Britain’s most expensive penthouse at One Hyde Park

The car was found in a carpark in North End Road, SW6; a forensic examination linked the men to the vehicle.

Detective Chief Superintendent Owain Richards, responsible for local policing in Kensington and Chelsea, said: ‘Over the last few months we have been focusing our resources in hot spot areas where we know watch robberies have increased.

‘Our dedicated robbery team are tirelessly tracking down those responsible for these kind of crimes and we hope this case demonstrates that anyone committing these offences will be identified and brought to justice.’