Former army boss Sir Peter Cosgrove, who led the response to Queensland’s Cyclone Larry, says relying on the military in disasters is unviable and states need a paid, highly trained civilian emergency response force that is modelled on the Army Reserve.

The debate over the military’s role in disasters comes amid a decline in traditional emergency volunteering, with a major research project warning of high turnover rates, older volunteers, and growing levels of burnout due to more frequent disasters.

The ADF is increasingly called upon in crises; it helped during the Black Summer fires and COVID-19, while on Friday 6000 personnel were on the ground in Queensland and NSW assisting with the flood recovery. They were also deployed to Tonga to help with tsunami recovery in January. 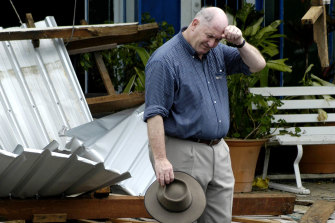 However, defence experts warn that too much reliance upon the military in these events is stretching it too far and distracting from its main focus, which is defending Australia’s sovereignty. There have also been calls for a new, semi-civilian emergency response unit within the army. 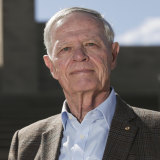 Former ADF chief Admiral Chris Barrie says young Australians should be given incentives to volunteer in the community or military. Credit:Alex Ellinghausen

Sir Peter – also a former governor-general – said he did not think it was viable for the military to develop a disaster capability, and warned against diluting their focus on their key job. “We pay the military for their capacity to accept hardship, short-notice deployment, but also pay them to exercise exquisitely difficult skills,” he said.

He suggested the states develop, but the Commonwealth fund, a standing emergency response force made up of civilians but modelled on the Army Reserve. Recruits would develop expertise with regular paid training, and be on standby if they were needed.

“They would be people who would learn [disaster relief skills] and would have to keep them current,” he said. “They are trained because they are going to take on hazardous work. They are skilled, equipped, and they are readily available at a drop of the hat.” They would work with existing state emergency services, he said.

Michael Shoebridge, the director of the defence, strategy and national security program at the Australian Strategic Policy Institute, said Sir Peter’s plan for a joint Commonwealth and state civilian force would be tripped up by the red tape of federalism.

“If you put a solution in place with these inter-dependencies between state and federal governments, it won’t work smoothly and in a timely way,” he said. “That’s what we’ve seen in every disaster, and that’s what we’re seeing in NSW.”

Mr Shoebridge wants to see a new, semi-civilian capability developed within the ADF structure that could also help Australia’s neighbours. “The institution to build upon … that you can deploy as circumstances dictate, the only system that looks like that is the ADF,” he said. 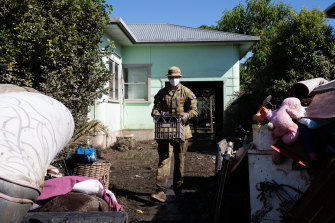 Members of the ADF help locals to clear their flood-damaged homes in Broadwater in the Northern Rivers.Credit:Janie Barrett

He reiterated his call for young Australians to be obligated to perform either community or military service. “My scheme was all young Australians up to the age of 26 had an obligation to accrue 1000 points of service for the country,” he said.

Professor John Blaxland, a former intelligence officer and military historian at the Australian National University, backed Admiral Barrie’s idea and said the ADF had been “stretched thin” by responding to consecutive emergencies. He said a new model was needed.

“The ADF has a degree of spare capacity for responding to crises. But if you constantly use it for that, you will erode its ability to do its principal function, which is to fight in defence of the nation,” he said. “We’ve got a Defence Force that is now actually seriously strained.” 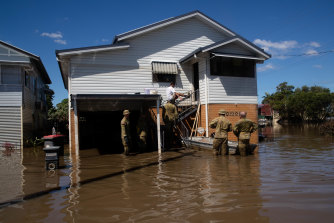 Members of the ADF join community volunteers to clear the house of elderly couple, Gail and Bill Ferrier, in Woodburn in the Northern Rivers region of NSW.Credit:Janie Barrett

He said a voluntary national and community service scheme could be established through an agreement between the states, territories and federal government, incentivising young people to join state emergency services and defence forces.

The debate comes as a major research project by the Bushfire and Natural Hazards Cooperative Research Centre (CRC) said the traditional model of volunteering, which underpins organisations such as the State Emergency Service, is declining.

In one State Emergency Service, the annual turnover rate was between 20 and 25 per cent.

The shift is due to the changing nature of paid work, lifestyles and values, and the social impact of technology, the report said. There is more competition for volunteers’ time, growing levels of volunteer burnout, and many existing volunteers are older.

More people choose to help communities outside traditional volunteer structures – as they have in during the Northern Rivers floods – but informal and spontaneous responses were poorly integrated with the formal emergency management system.

“There is a rise in new … styles of volunteering that are more diverse, fluid, episodic and digitally enabled,” said the report, Enabling Sustainable Emergency Volunteering, which was released in August last year.

On Tuesday, Defence Minister Peter Dutton said he was willing to consider new capabilities for the Defence Force. “If there’s an enduring role for defence to play which they may not have played in the past, we can look at that,” he told ABC radio.

On Thursday, Prime Minister Scott Morrison pledged to expand ADF ranks to 80,000 permanent personnel by 2040 – and 30 per cent increase at a cost of $38 billion.

The 2020 Royal Commission into Natural Disaster Arrangements, held after the Black Summer fires, found there was a public perception the ADF was always readily available to be deployed in a crisis and concluded that: “This is not, in fact, the case. Nor is it a reasonable expectation of the ADF.”

A guide to the environment, what’s happening to it, what’s being done about it and what it means for the future. Sign up to our fortnightly Environment newsletter here.