Asian accountant, 51, who smashed his ex-wife’s head against a car and called her a ‘bacon basher’ after she began dating a white man is ordered to pay her £150 compensation

An Asian accountant who smashed his ex-wife’s head against a car and called her a ‘bacon basher’ when she started dating a white man has been spared jail and ordered to pay her £150 in compensation.

He attacked the mother of his three children after she emerged from the gym to find her white Lexus had been sprayed with black graffiti.

As Mrs Ahmad called police to report the crime, Ahmad dragged her to the ground by her Louis Vuitton bag and started beating her, before slamming her into a nearby BMW, denting the bodywork.

The assault was stopped by Mrs Ahmad’s boyfriend David Wallwork, 54, who pinned her ex-husband to the ground as he ‘thrashed about’. 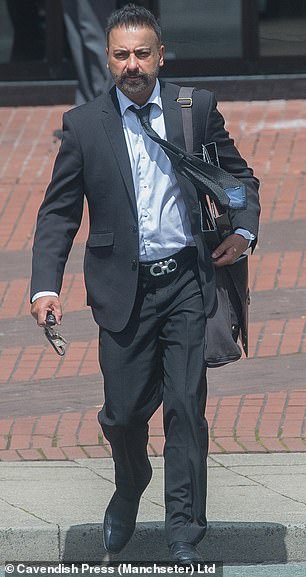 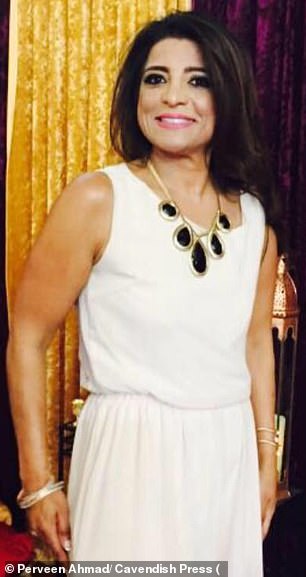 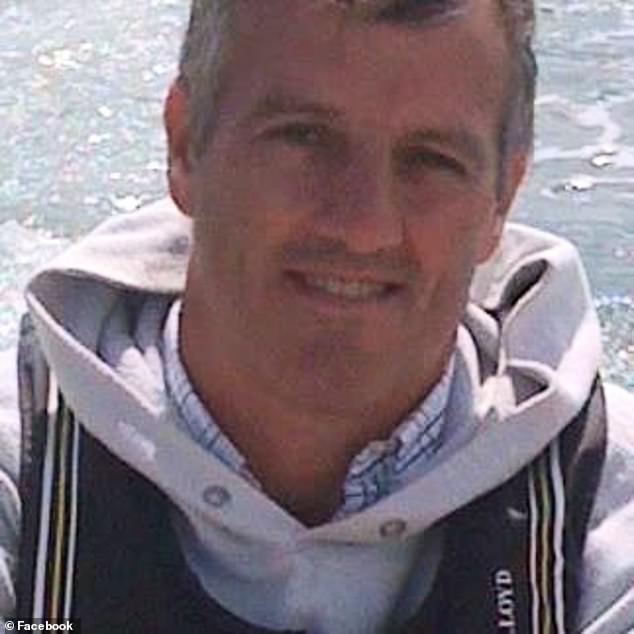 Stockport Magistrates’ Court heard Ahmad was angry because the mother of his three children was dating David Wallwork, 54, pictured, a former employee at the Manchester lettings agency where they worked

Mrs Ahmad met Mr Wallwork at the lettings agency in Manchester where she and her ex-husband both worked and Stockport Magistrates’ Court previously heard Ahmad was furious about their relationship.

Police later recovered footage of the incident shot on Ahmad’s own mobile phone in which his ex-wife is heard calling him a ‘bitter, twisted man’ and accused him of money laundering.

He replied claiming she ‘does dark magic’ and also mocked her skin condition, melasma, which causes dark patches to form on her face.

In the footage he added: ‘She is vicious that why she has got a black face because she’s vicious – you’re evil, you’re absolutely evil.’

Mrs Ahmad, who is a manager at the lettings agency, was taken to hospital with grazes to her arm, elbow and knees. She also told police she feared her ex would harm their children.

The court heard the couple split up in 2015 after Ahmad ‘walked out on the family’ on Father’s Day. 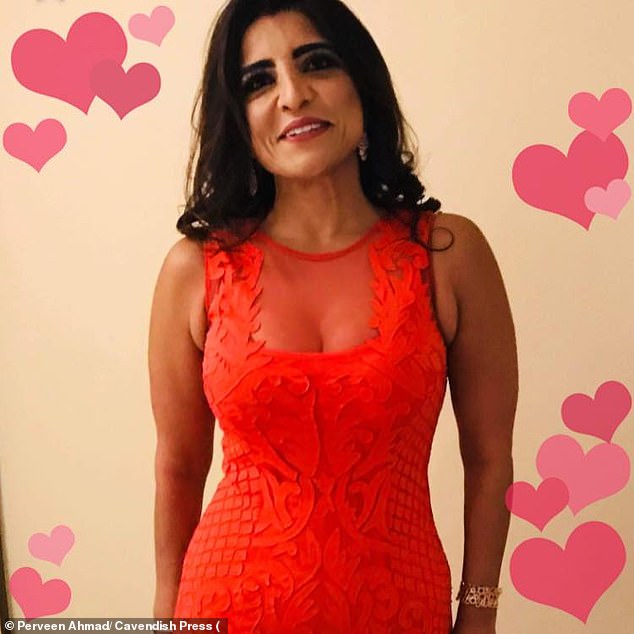 Mrs Ahmad, pictured, who was married to Ahmad for 21 years, told the court their divorce was ‘acrimonious’ and that he attacked her when she found her white Lexus had been sprayed with graffiti and tried to call the police 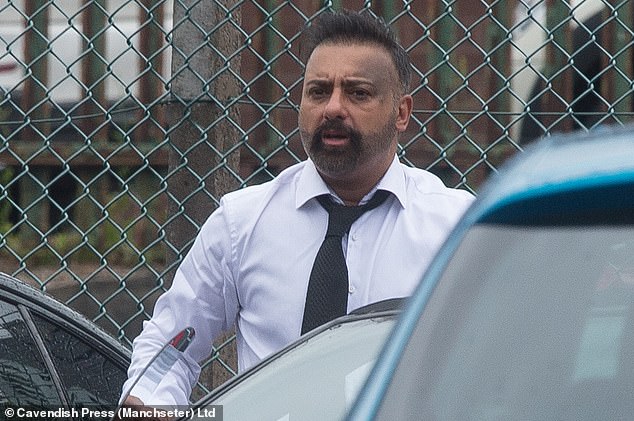 Ahmad, pictured, told the court his ex ‘practised witchcraft’ and that he was only there to confront her for sending him ‘provocative pictures’

She later began dating Mr Wallwork, who formerly managed properties for her husband.

The court heard Ahmad would turn up at his ex-wife’s home and had sent pictures to Mr Wallwork and was given a police warning for harassment.

Mrs Ahmad told Stockport magistrates: ‘It [the divorce] has been very acrimonious.

‘When my ex-husband ended the marriage I felt shocked as it was Father’s Day. You don’t forget father’s day, I was upset for the children.’

Speaking about the day of the assault, she told the court she and Mr Wallwork were at the gym when she discovered her car had been vandalised and then saw her husband arrive when she began calling the police.

Mrs Ahmad said: ‘As I was on the phone I said: “That is him – that is my ex who has done the damage” but he got his phone out and put it to my face and he started calling me a “black witch” and a “black b****”.

‘He is constantly mocking me for my face I have melasma on my face he put the phone to my face and he was saying all sorts of obscenities.

‘As that was happening I said: “You have sprayed my car this is what you have done to my car’ at that time the police were still on the phone.

Mrs Ahmad, pictured, said her ex also frequently mocked her for her skin condition, melasma, that causes dark patches to grow on her face

‘He called me a “bacon basher” and he has said it many times – it means that I’m going out with somebody who is white and it wasn’t the first time i have heard that.

She added: ‘I just remember I had on this Louis Vuitton tote bag but he pulled my bag and he dragged me to the floor and I remember falling and rolling – banging my head.

‘I remember getting up but the next thing was my head was being bashed on a car and he had hold of me putting my head against a car.’

Ahmad claimed he had gone to the gym to confront her because she kept sending him ‘provocative photographs’ while he also told the court she ‘does witchcraft’.

He said: ‘She kept sending provocative photographs and I said: ‘look you can’t be sending photographs like this – please don’t’.

‘I said that she does witchcraft and she is the queen of witchcraft.

‘She was following me and I kept saying: “Please don’t follow me” when I was walking to my car.

‘She kicked me and I let that go but then when she was following me she said I was bitter and twisted and that really upset me so I said: ‘You perform witch craft and the marks are on your face.’

‘I said: ‘this is part of the problem she’s got’ because I feel like she’s not moved on.’

He also claimed he only grabbed her bag because he believed she had taken his phone, and that she hit the car accidentally when he pushed her away in a struggle.

Ahmad added: ‘I pulled the bag, she resisted, I pulled harder and she fell to the floor.

‘At that time my primary concern was just to get the phone out the bag and I tried to push her away but there wasn’t a lot of space and her head hit the car.

‘I protected myself – I have never raised my hand to a woman.’

Defence lawyer Benjamin Kaufman told the hearing Ahmad regretted his actions and claimed it was an ‘isolated incident’ for a ‘hardworking family man’.

He added: ‘This is a man desperate to move on with his life he is somebody that has always supported his family both emotionally and financially being a positive role model to his three children. 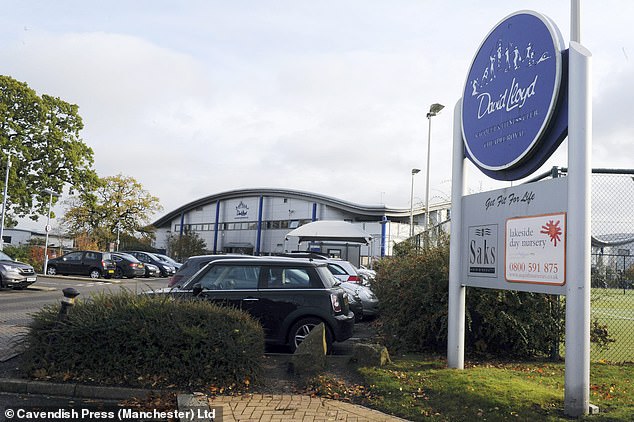 The attack took place outside this David Lloyd Centre in Cheadle, Greater Manchester

‘He is now in a position where he doesn’t see any of his children – it has destroyed him and broken him because his children were his life. It has been a very acrimonious divorce the only real losers in this case are his three children.’

Ahmad was convicted of assault by beating and criminal damage at an earlier hearing.

Alongside the compensation, he was also banned from contacting his ex-wife as part of a 12-month restraining order.

He was also handed 150 hours unpaid work and a 12 months community order while he was also ordered to pay £818.32 to the BMW owner plus £735 in costs and surcharges.