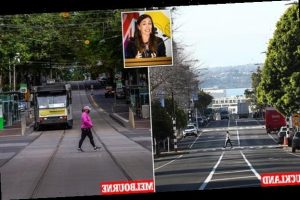 Officials said the rest of the country will also be placed under stringent restrictions but will avoid another economy-wrecking shutdown after an Auckland mother, father and daughter tested positive for the virus.

Parts of Auckland were shut down on November 12 last year after a single case of Covid-19 was recorded. In that instance, the infected person was a female university student with no immediate links to foreign travel.

In Melbourne, Australia, health officials are refusing to rule out extending Victoria State’s snap five-day lockdown as cases of the Kent mutant variant first detected in England around Christmas are recorded.

Victoria, which has recorded around 20,640 cases and 820 deaths, will close schools and ban private gatherings while masks will be required everywhere.

New Zealand has not started a vaccination programme – unlike in Britain, where Prime Minister Boris Johnson’s government has inoculated nearly 15 million people in a bid to bring the cycle of lockdowns to an end.

Ms Ardern announced that the jabs rollout will start on February 20 amid mounting pressure to start vaccination for the country’s five million people after the country recorded just 26 deaths and 2,300 cases.

The New Zealand government has refused to lift restrictions until it achieves Zero Covid – with methods of suppression including border controls, tight domestic curbs and an aggressive track and trace system combined.

In Britain, however, government scientists have recommended lifting lockdown measures when 1,000 daily cases are recorded amid pressure from Tory backbenchers who fear that shutdowns cause massive economic and societal damage – and inflict more harm than the virus. 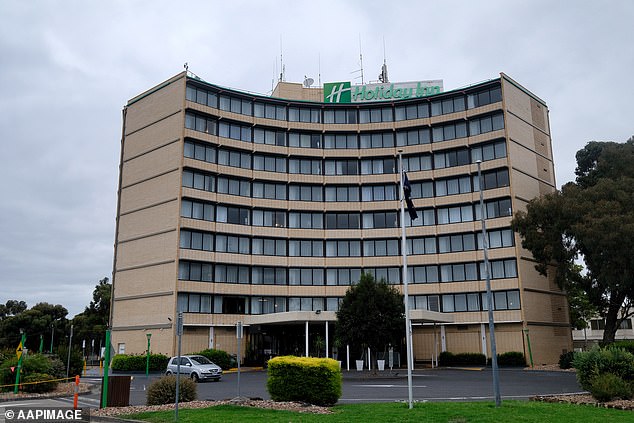 In Australia, health officials are refusing to rule out extending Victoria State’s snap five-day lockdown as cases of the Kent mutant variant first detected in England are recorded. Pictured, Holiday Inn at Melbourne Airport where a person tested positive for Covid 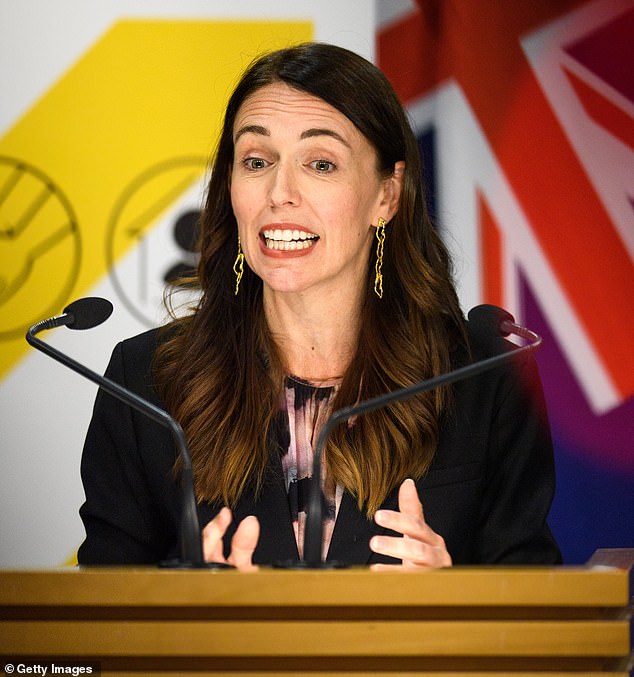 So far, the UK has recorded nearly 117,000 Covid-related deaths, 13,308 new cases in the last 24 hours – and endured three crippling lockdowns which has seen entire sectors of the economy crushed by government action.

Cases of coronavirus are regularly being caught among travellers returning to the isolated Pacific island country, who are required by government mandate to spend two weeks in quarantine upon arrival.

Auckland, which has a population of 1.5 million, will be moved to Level 3 restrictions from midnight on Sunday for three days, meaning residents are not allowed to move freely until midnight on Wednesday.

Covid-19 Minister Chris Hipkins announced that health officials were moving rapidly to test and isolate close contacts. ‘There is a number of gaps in our knowledge around these cases,’ he said.

Pressure has been mounting on New Zealand Prime Minister Ms Ardern to start vaccinations for the country’s 5 million people to take advantage of its rare position of having virtually eliminated the virus domestically.

‘Last year we indicated the vaccine would arrive in quarter two, and earlier this year we updated that to quarter one,’ Ms Ardern told reporters. ‘It’s pleasing to be receiving doses this early in quarter one.’

Both New Zealand and neighbouring Australia have formally approved the vaccine jointly developed by US drugmaker Pfizer Inc and Germany’s BioNTech.

The Australian government has said it expects to begin inoculations by the end of this month, without giving a specific date.

However, Ms Ardern said the vaccination programs would have no immediate impact on a stalled trans-Tasman travel ‘bubble’. 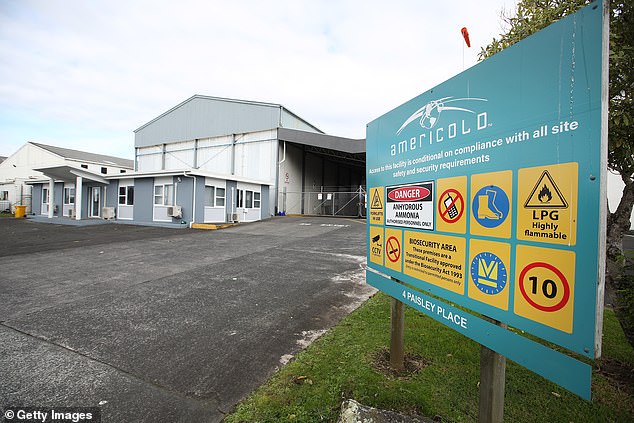 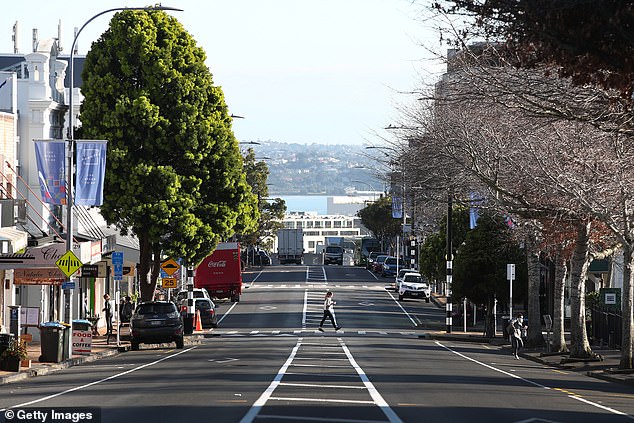 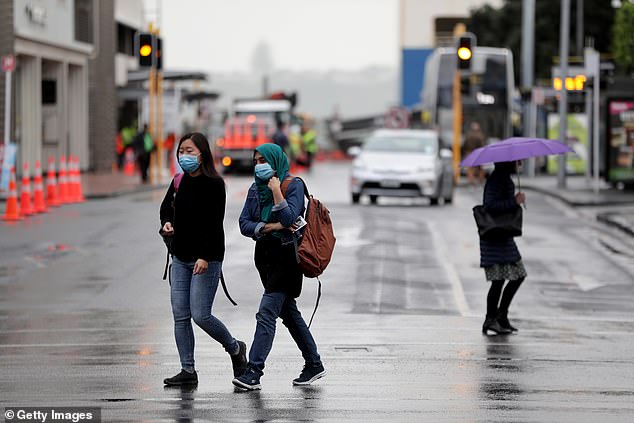 New Zealand Prime Minister Jacinda Ardern has plunged Auckland into a draconian three-day lockdown. Pictured: A person walks through the CBD on October 8 in Auckland

Australia and New Zealand had hoped to allow bilateral travel by the end of March, but fresh coronavirus outbreaks in Australia have stalled those plans.

Ms Ardern said border restrictions could be eased if there was evidence that vaccines reduce transmission.

‘That will be a significant step-change if we see that evidence emerge and I’m sure that will make a difference to travel in the world,’ she said. ‘But at this stage, it won’t necessarily make a difference.’

Ms Ardern said New Zealand’s approximate 12,000 border workers would be the first to be vaccinated, followed by their household contacts.

Healthcare workers and high-risk people like the elderly would be next, before vaccinations for the wider population start in the second half of the year.

‘We have pre-purchased enough vaccines to cover all New Zealanders and to do so for free, and the Pacific as well,’ she said.

New Zealand’s medicines regulator is also in talks with AstraZeneca, Novavax and Janssen Biotech regarding approval for their Covid-19 vaccines 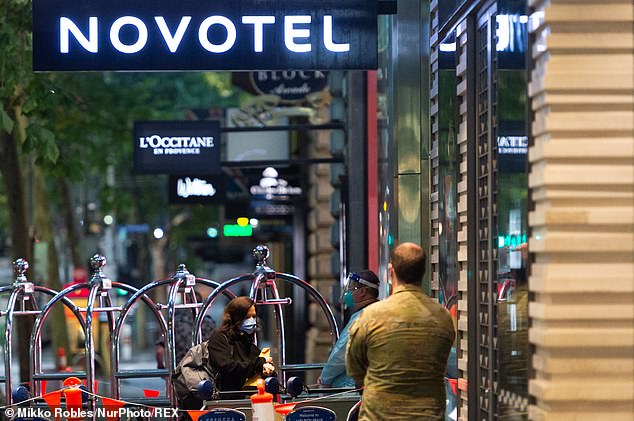 An international traveller makes their way inside Novotel Melbourne 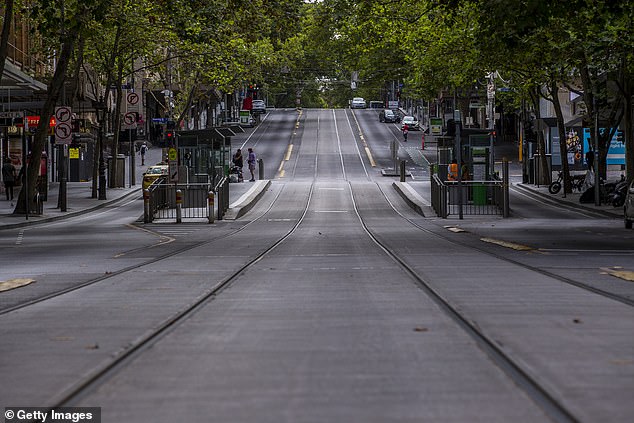 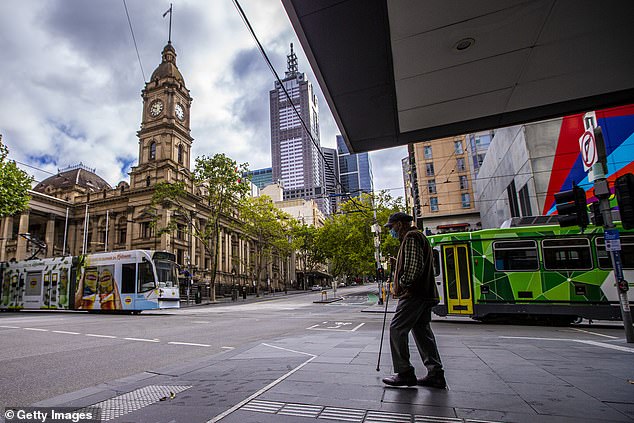 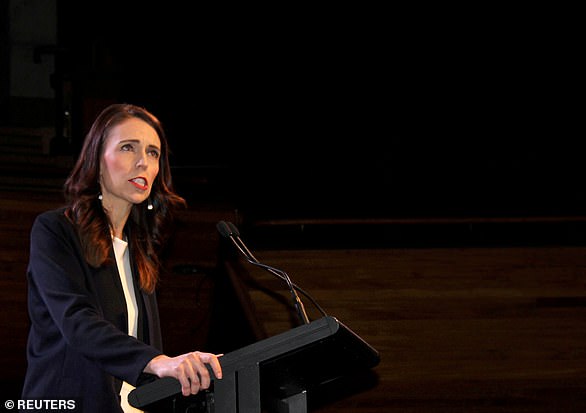 New Zealand Prime Minister Jacinda Ardern has been praised globally for her government’s handling of the coronavirus pandemic.

A Lancet report noted that switching from mitigation to suppression, the New Zealand government set about eradicating Covid-19 through state action – involving a border crackdown, tough domestic curbs and quarantining.

Between February and May last year, it introduced the following tiers: 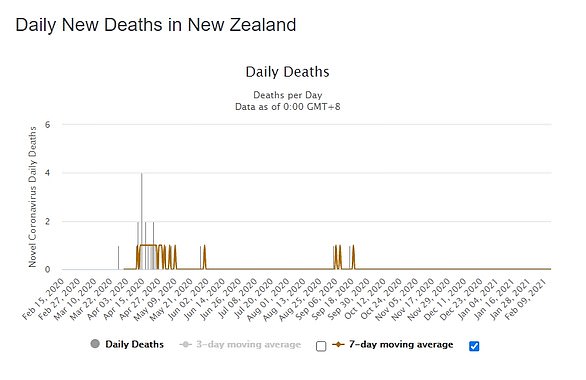 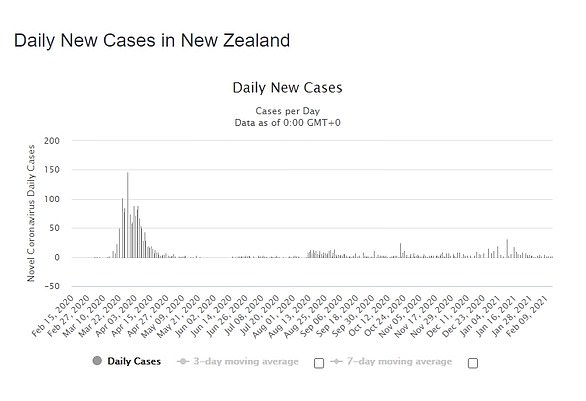 These measures, combined with New Zealand’s isolated geography and spread-out five-million population, allowed the Government to declare that it had suppressed Covid – achieving Zero Covid for periods of time.

Official figures show that New Zealand recorded a negligible number of daily cases and deaths while Britain – a major global travel hub on the Western corner of Europe – recorded the worst toll across the Continent.

By comparison, the British government has been accused of acting too slow during the spring outbreak last year. Government scientists insist the high numbers of cases and deaths are explained by the failure of rule-breakers to comply with tough domestic and travel restrictions.

However, Pensions Secretary Therese Coffey recently sparked outrage after implying that Britain’s 100,000-plus death toll could be mostly explained by the underlying health of the nation.

In an incendiary interview with Piers Morgan on Good Morning Britain, she suggested that Britain’s ageing population and the level of obesity were some of the factors behind the high death numbers from the disease. 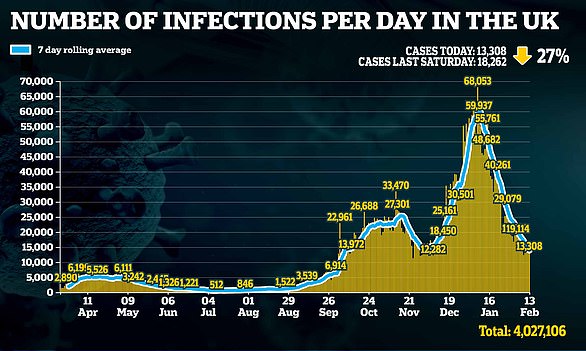 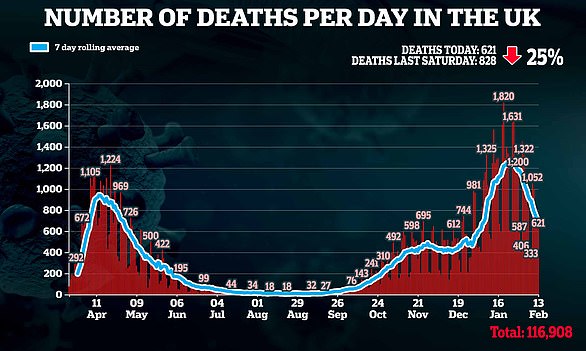 By comparison, the British government has been accused of acting too slow during the spring outbreak last year. Government scientists insist that the high number of cases and deaths recorded across the UK is explained by a failure by rule-breakers to comply with restrictions including the ‘stay at home’ order

But she became furious when Mr Morgan said she seemed to be blaming the problems on people being too fat and too old, asking her: ‘Are you saying that the reason for us having the worst death rate in the world is because of the public? We’re too old and we’re too fat?’

A clearly angry Ms Coffey shot back: ‘I think that’s a very insulting thing that you just said. I’m conscious that there are a variety of factors that would have sadly led to being ill during this time, sadly that translating into deaths.

‘I’m very conscious that this is a very serious impact that our prime minister was in hospital, in intensive care himself last April.

‘I am conscious that we want to have a wrap-around response from people.’ 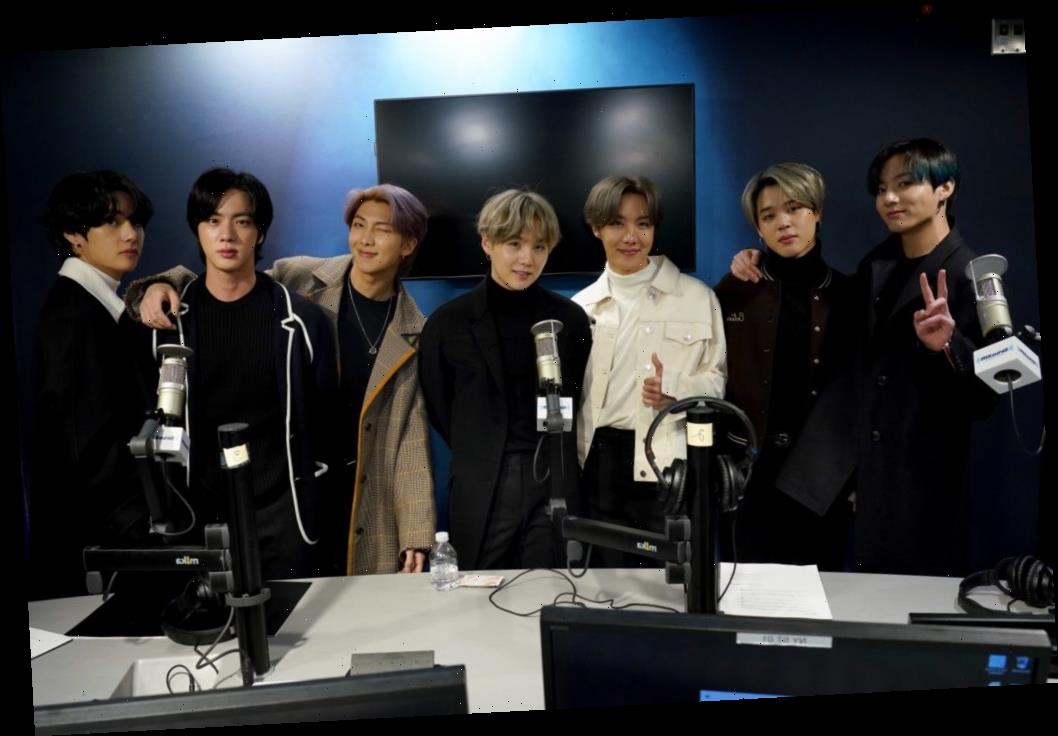