Australian honey producers have won a four-year trademark battle in Britain amid a long-running dispute with New Zealand over who can claim the term “manuka honey”. 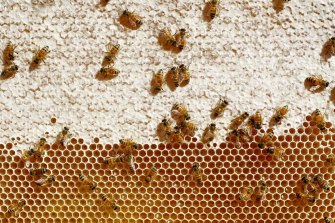 The New Zealand government had backed a campaign by Kiwi beekeepers to prevent Australian rivals from using the word “manuka”.Credit:Steven Siewert

They claimed they had the rights to the term, arguing that mānuka was a Maori word and was a distinctive product of New Zealand.

Britain’s Intellectual Property Office this week rejected the trademark application, saying there was no evidence the public believed the product was exclusively from New Zealand.

Australian Manuka Honey Association, which fought the application in court, said it would have been deeply unfair and financially devastating to deny producers the right to use the term.

“This decision is the right decision and a fair decision. The term manuka has been used in Australia since the 1800s and the Australian industry has invested significantly for decades in manuka honey science, research and marketing,” chairman Paul Callander said.

The association argued the term “manuka honey” was a customary term used to describe honey made from the manuka tree, found in both New Zealand and Australia.

In reaching its decision, the court acknowledged that the term was mostly descriptive of a type of honey and used widely beyond New Zealand.

“Whilst the vast majority of manuka honey sold in the UK appears to be from New Zealand and this is indicated on the packaging (but mostly not in a prominent way), there is nothing in the evidence to indicate that [the] relevant public will understand that it exclusively originates from New Zealand,” the decision read.

“On the contrary, there is evidence from dictionaries, the [UK Food Standards Agency] project and from press articles that all suggest that the public understanding of the term in the UK is that it describes honey from New Zealand and other geographical locations, in particular, Australia.”

Mr Callander said the court’s decision would be felt across many Australian industries, with the manuka honey market forecast to be worth $1.27 billion globally by 2027.

“The Australian industry has fought hard to protect its rightful interests in this growing market, and will continue to do so. This decision is an important one that we hope will be followed by other jurisdictions where trademark certification has been sought,” he said.

He said the legal action had been costly for the association, while the New Zealand government has funded local producers’ attempts to trademark the term in international markets.

“Hopefully there’s a bit of sense starting to prevail on the Kiwi side now,” Mr Callender said.

“We’ve been recommending collaboration with them for four years and we’ve been rebuffed every time.”

Demand for manuka honey, made from the leptospermum scoparium plant, has boomed across the globe thanks to its reported health and wellness benefits. Products can sell for between $300 and 500 per kilogram.

The same group of New Zealand producers has also sought to trademark the term in the United States, Europe, New Zealand and China. So far, no region has agreed to register the trademark.

A decision from the New Zealand Intellectual Property Office is expected early next year.