Beach walker finds jellyfish washed-up with another fish stuck inside

In the belly of a jelly! Beach walker finds jellyfish washed-up with another fish stuck inside

A beach walker couldn’t believe his luck when he found a fish inside a jellyfish – on dry land.

Keen wildlife photographer Ian Watkin was out for an early morning stroll with his dog when came across the alien-looking creature on Harlyn Bay Beach in Padstow on Wednesday.

The bizarre discovery, made during National Marine Week, showed a Compass jellyfish washed up on the shore with a clearly visible fish stuck inside it.

The picture, taken by Mr Watkin, shows the fish appearing to look stunned after becoming the jellyfish’s latest meal.

Cornwall Wildlife Trust shared the image, saying: ‘This Compass jellyfish was found washed up on Harlyn Bay Beach near Padstow with a fish inside its belly. 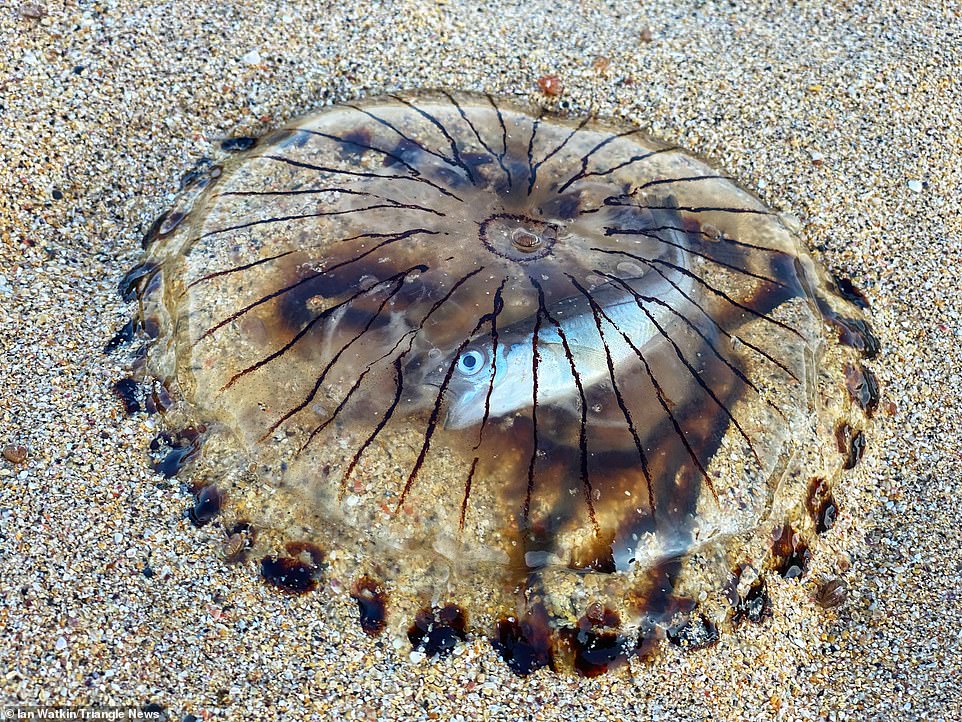 Cornwall Wildlife Trust shared this fascinating image, saying: ‘This Compass jellyfish was found washed up on Harlyn Bay Beach near Padstow with a fish inside its belly.’

‘Often jellyfish are used as nurseries by juvenile fish as they hide amongst their tentacles for protection from predators.

‘Unfortunately, this one seems to have been stung and became lunch for the compass.

‘Just look at how it occupies almost the entire width of the jellyfish’s belly!’

Mr Watkin, who is also a keen diver, said he has seen many before, but was finally happy to capture one on camera for the first time on August 4.

He added: ‘I was walking the dog first thing just after 7am and the tide was on its way out with the sun coming up.

‘I’ve seen lots before as I’ve been a diver for over 20 years but have never managed to capture one on camera.

‘It’s not something you see every day.’