The Bel Air mansion where federal agents found more than 1,000 guns thought to be worth several million dollars belongs to the former mistress of oil fortune heir Gordon Getty, with whom she had a secret family.

According to court records, the $7 million, five-bedroom property comprising 8,200 sq-ft belongs to Getty’s former mistress Cynthia Beck, whose 14-year-long secret relationship with the wealthy scion was exposed in 1999.

Getty, whose $2 billion fortune makes him one of the world’s wealthiest men, conducted the illicit affair with Ms Beck behind his wife Ann’s back and fathered three daughters – Alexandra, Nicolette and Kendalle – in the process.

One man was arrested at the scene, 57-year-old Girard Damien Saenz, who was taken to LA County Sheriff’s Department with bail set at $50,000. Beck and Saenz are long time companions who own several properties together, public records show.

The LAPD say they are still working through the enormous weapon and ammunition haul, which ranges from modern firearms to antique Civil War rifles as well as shotguns, handguns and even weapon manufacturing equipment. 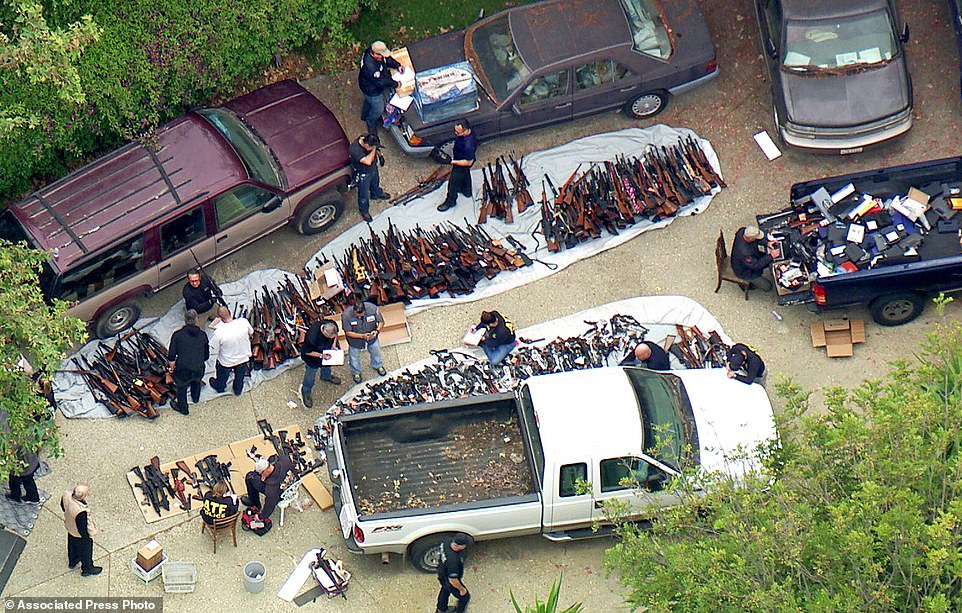 Some of the thousands of guns that BATF agents found on Wednesday at the Bel Air mansion owned by Gordon Getty’s former mistress Cynthia Beck. Authorities discovered the weapons stash after obtaining a search warrant for the $7 million home in one of the most affluent neighborhoods in L.A. 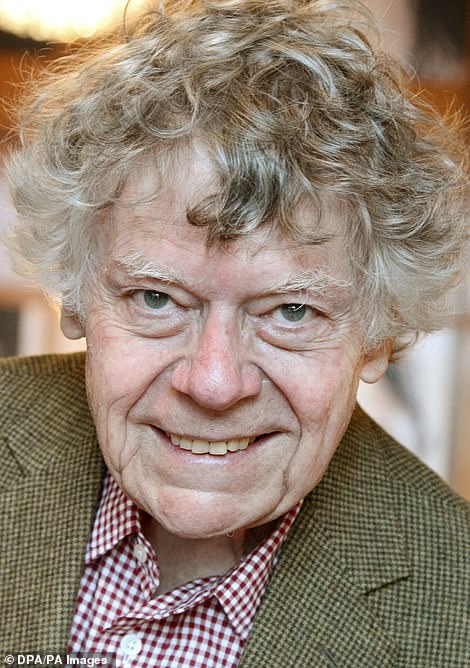 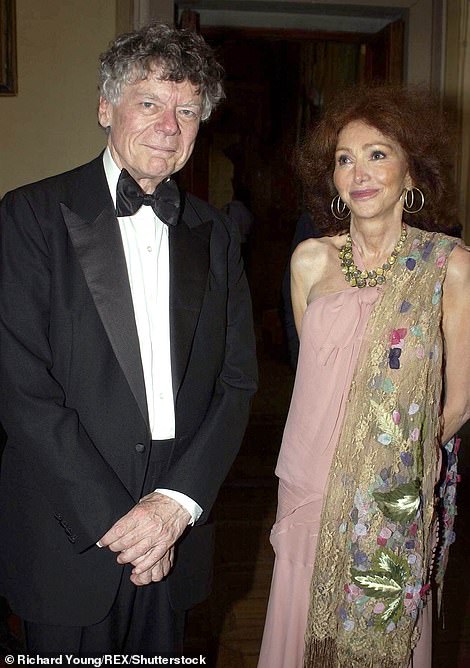 Gordon Getty secretly fathered three daughters with Cynthia Beck (not pictured), the owner of the raided house, in the 1980s and early 90s

Authorities discovered the cache of weapons while serving a search warrant at the home in the 100 block of North Beverly Glen Boulevard at 4am on Thursday. 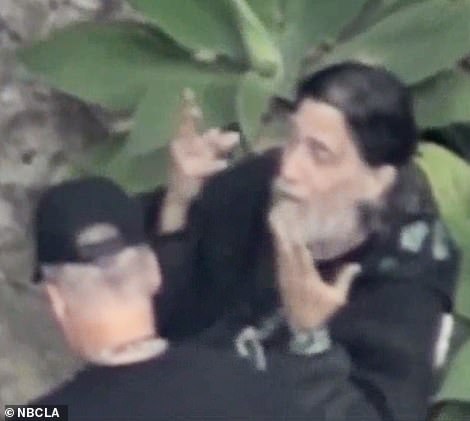 One man was arrested at the scene, 57-year-old Girard Damien Saenz, who was taken to LA County Sheriff’s Department with bail set at $50,000

Among the thousands of firearms are modern automated rifles plus pistols and Civil War era antique weaponry.

‘I had never seen so many weapons in my career of 31 years,’ said LAPD Lt. Chris Ramirez. ‘That’s such a big arsenal in a residence like this, in this type of neighborhood. It’s astounding.’

The officer added that it is not illegal for someone to own a large collection of firearms, however, he said it is illegal to sell weapons from one’s home without adhering to the strictly regulated state and federal processes.

Miss Beck, who is in her sixties, does not live in the mansion where the thousands of assault rifles were seized – which is thought to be part of a large property portfolio purchased for her by Getty during their relationship.

She is believed to lead a reclusive life in Europe and very few photos of her exist.

‘Nicolette, Kendalle and Alexandra are my children,’ Getty wrote in a press when the scandal broke in 1999.  ‘Their mother is Cynthia Beck, and I love them very much.’

Getty also had four children with wife Ann, including meth-addled son Andrew who was found dead aged 47 on the toilet of his Hollywood mansion in 2015. 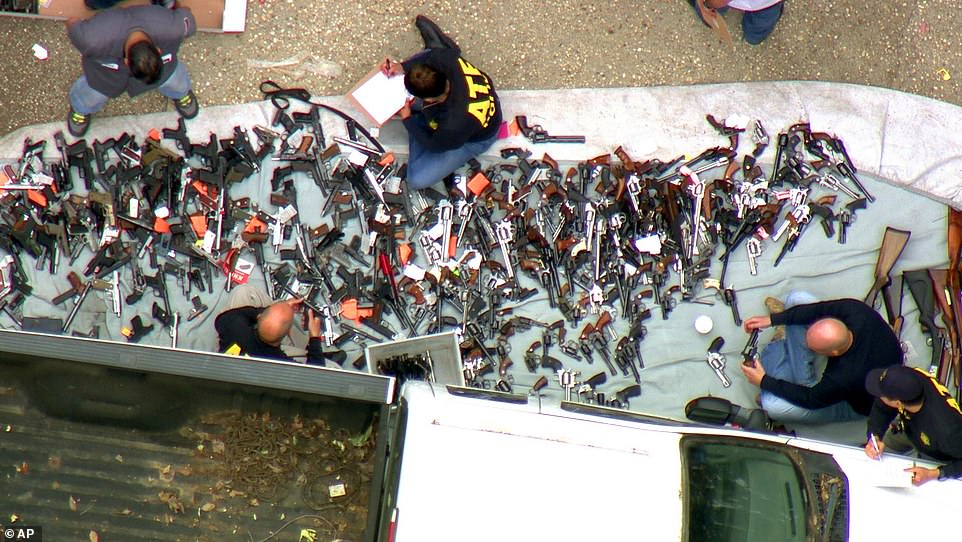 Thousands of weapons found at the home of Beck, who friends of the famous family have described as a ‘lovely woman’ 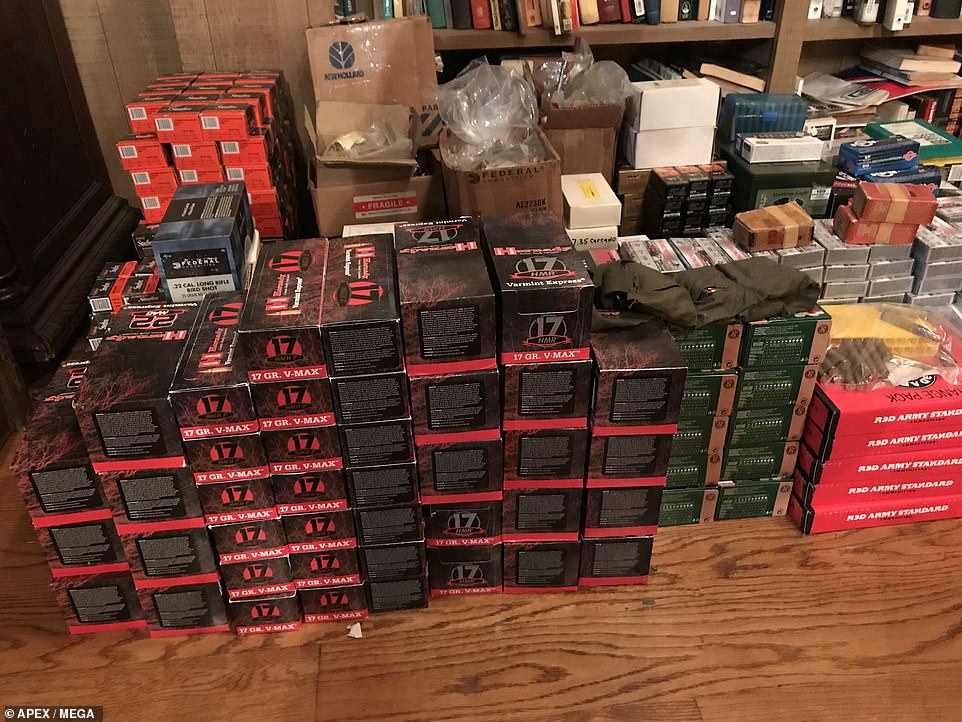 Friends of the famous family described Beck at the time as a ‘lovely woman’ but not a socialite.  ‘She is a nice lady and lives in the L.A. area’ her daughters’ lawyer Stephen Burgin said.

The Bureau of Alcohol, Tobacco and Firearms (BATF) raided the property following an anonymous tip-off.

‘Obviously it’s a lot,’ Lopez said on Wednesday. ‘They’re going to be there a long time. Possibly even tomorrow.’

‘ATF and LAPD have no reason to believe the public is in any danger,’ a statement from the agency said. 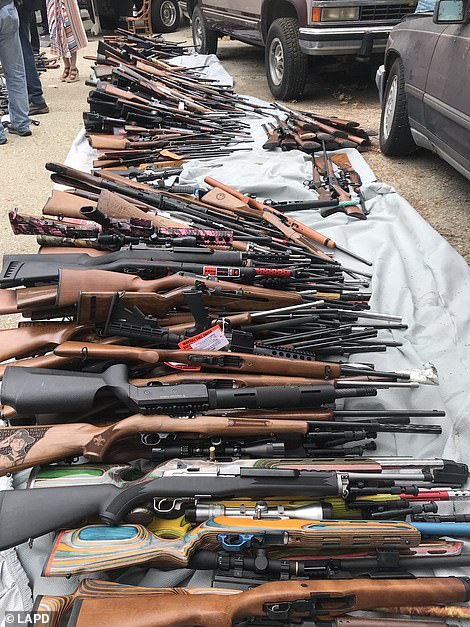 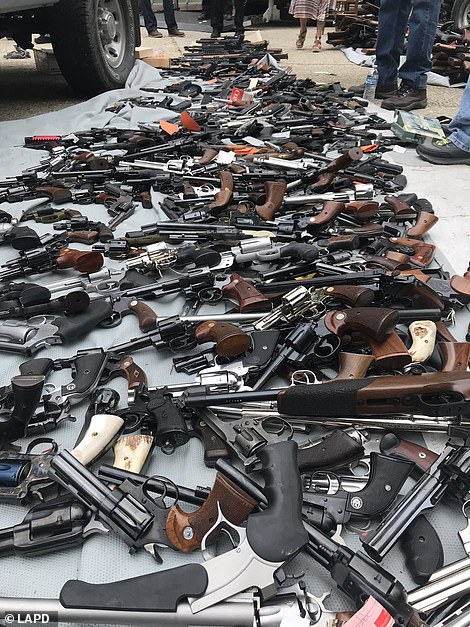 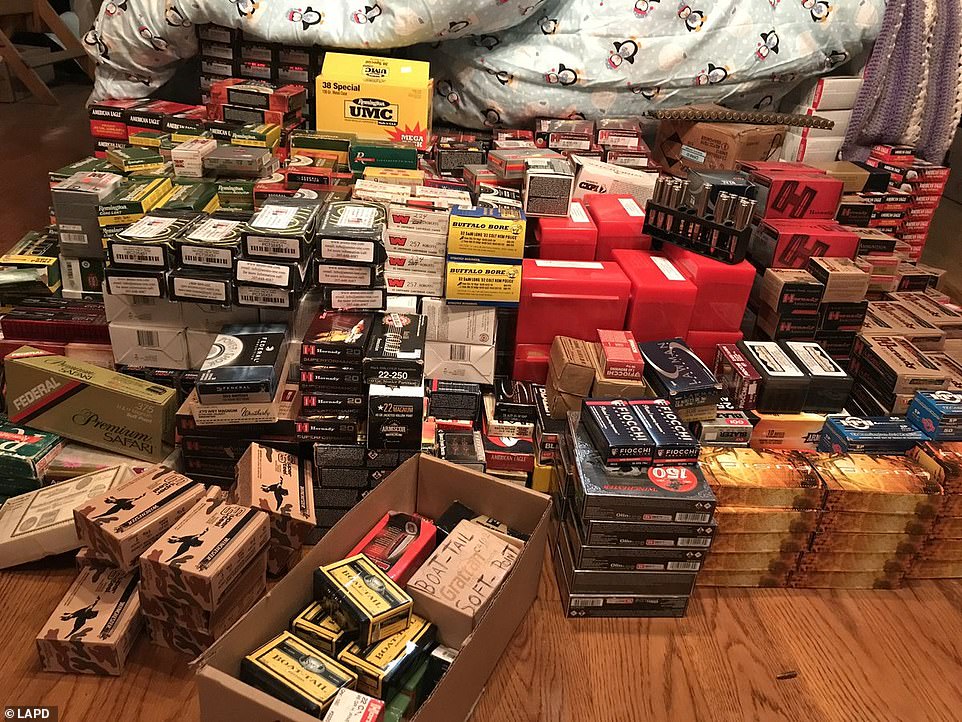 More ammunition seized from the $7 million Bel Air mansion, bought for Beck by Getty during their affair 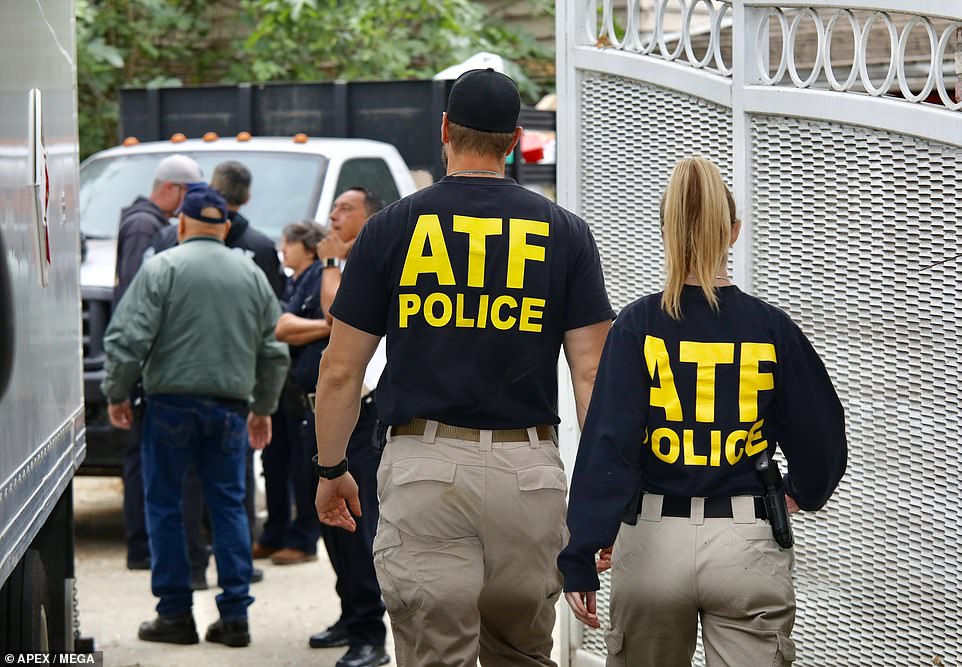 Another home on North Bunker Hill Avenue in Los Angeles was also searched as part of the investigation, law enforcement sources said.

Some believe the Getty family suffers from a curse, which has seen many misfortunes befall them. Gordon’s son Andrew Rorke Getty aspired to be a movie director, laboring for 13 years on his only film the The Evil Within.

But before he could complete  the film, he was found dead at his Hollywood Hills home in 2015 at the age of 47.

In 2003, Andrew was sued by a studio assistant, Ingrid Jacobs, for £500 in unpaid wages for his first and only film.

The court heard how Getty snorted cocaine, spent heavily on prostitutes and carried a gun — keeping an arsenal of assault rifles at his home and threatening the film crew with them. 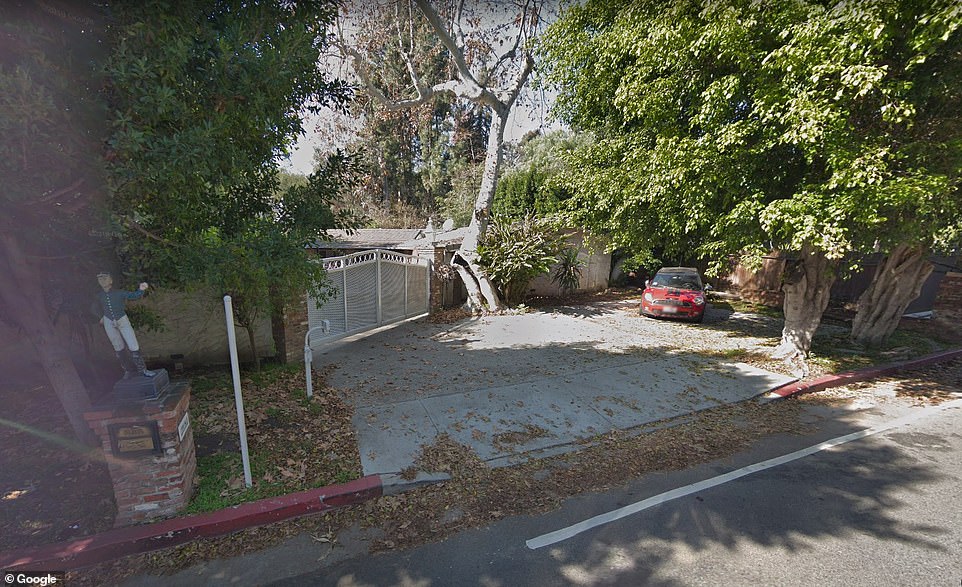 The Bureau of Alcohol, Tobacco and Firearms (BATF) raided the property (pictured) following an anonymous tip-off

‘All of us lived in fear of his dark, violent moods,’ said Ms Jacobs in court. ‘He once screamed at me: ‘I’m going to kick you in the kidneys so hard that you choke.’

‘He had no worries about spending thousands a week on high-price prostitutes, but he was mean as hell with everyone else.’

Charity Thomson, the movie’s assistant director, said she saw Getty snorting drugs while on the set. She described him as ‘a spoilt rich kid who doesn’t value his own life or that of anyone else’.

The coroner said his heavy use of methamphetamine had contributed to his death by bleeding from an intestinal ulcer.

Andrew was the second eldest of four sons of Gordon Getty,  who himself was the fourth son of the family patriarch J. Paul Getty, yet still Gordon assumed control of the $4billion family trust when his father died in 1976.

J. Paul Getty married five times and produced six children, whom he treated with such disdain he never even bothered to attend their weddings. 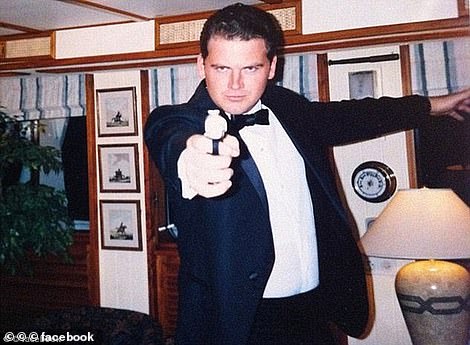 Getty curse: Andrew Rorke Getty died at his Hollywood home in 2015 from intestinal bleeding which a coroner said was exacerbated by his methamphetamine habit

He became the world’s richest man when he struck oil in the Middle East in 1953. He reportedly showed affection for his youngest son, Timmy. But when he died aged 12 from a brain tumour, his father didn’t go to his funeral.

His other sons fared little better. His eldest son and heir apparent, George, worked himself into an early grave trying to impress his father in the family business.

He became so despairing at his failure that he would stab himself in the arms with a letter opener. He turned to drink and drugs, and died in 1973 after overdosing on pills.

J. Paul Getty’s second son, Ronald, was virtually disinherited after his mother Adolphine — Getty’s third wife — dared to drag her feet over a divorce when the tycoon decided to move on to wife number four.

John Paul Junior, the third boy, has gone down in history as the prodigal son. After a first job earning $100 a month as a petrol pump attendant, he joined the family business, but took to drinking heavily.

He became a heroin addict soon after meeting his second wife, the Dutch actress and socialite Talitha Pol. They became darlings of the celebrity hippie set, partying with the likes of Mick Jagger and Keith Richards. 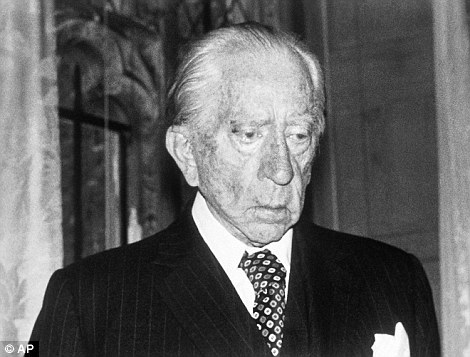 Patriarch: J. Paul Getty married five times and produced six children, whom he treated with such disdain he never even bothered to attend their weddings. He became the world’s richest man when he struck oil in the Middle East in 1953

When Talitha died of a heroin overdose in 1971, a devastated John Paul Junior holed himself up in his home in England. Unsurprisingly, he was cut off financially by his father, who intoned: ‘No Getty can be a drug addict.’

The shortage of funds proved tragic in 1973 when John Paul Junior’s oldest child, John Paul III, 16, was kidnapped in Rome by the Mafia.

When a $17million ransom demand arrived, his skinflint grandfather refused to help. It was only after one of the boy’s ears was sent through the post that Getty coughed up and the hostage was released.

In 1981, he suffered catastrophic liver failure and a severe stroke, emerging from six weeks in a coma virtually blind and paralysed from the neck down. He could communicate by little more than a high-pitched scream. He died aged 54 in 2011.