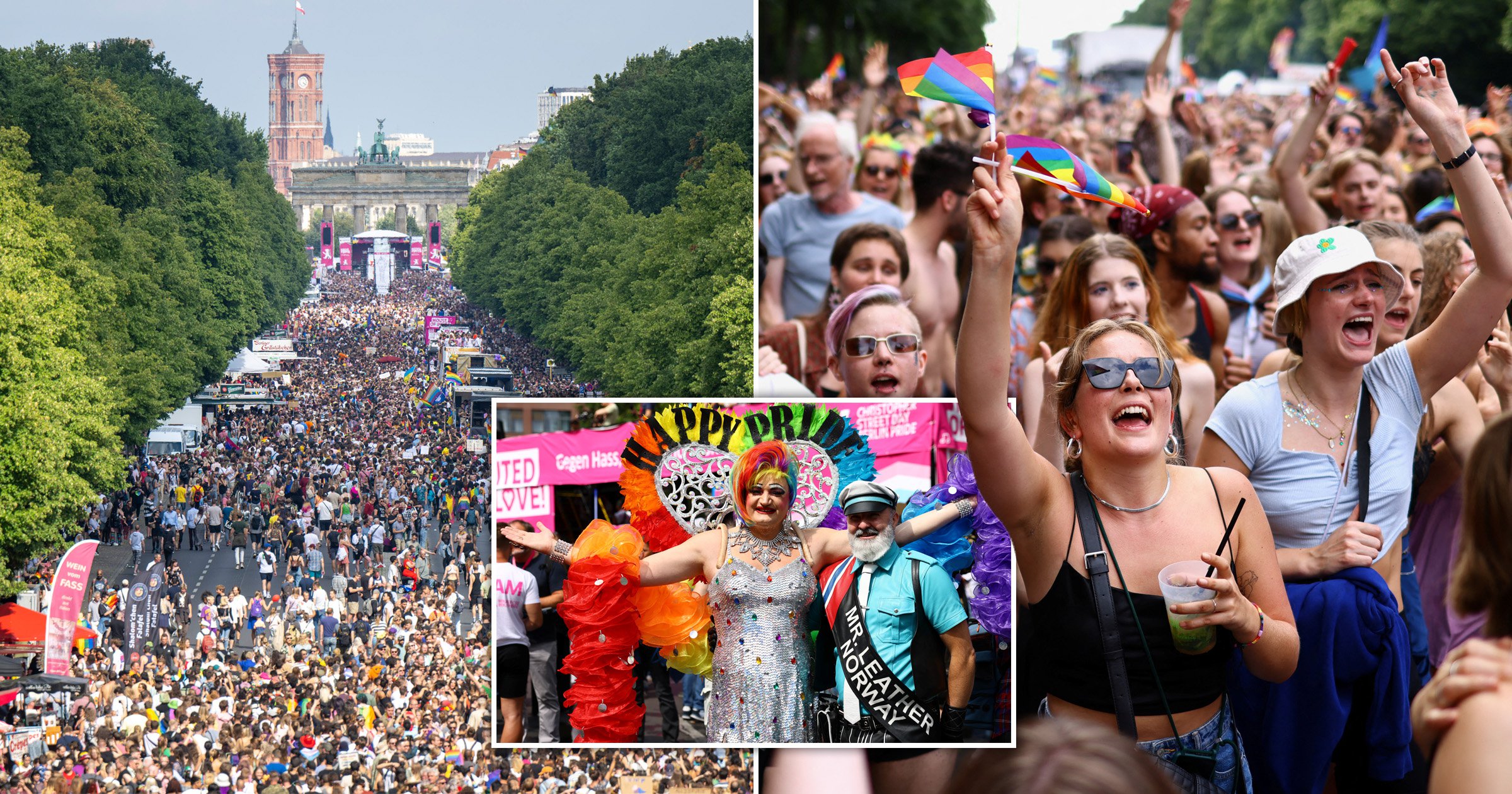 Around 150,000 people paraded in colourful style across the streets of Berlin for the first in-person Pride celebration since the Covid pandemic.

Draped in rainbow flags, the crowd marched for LGBTQ rights as part of the German capital’s Christopher Street Day.

The parade kicked off at midday local time with a rally and a shower of confetti at Spittelmarkt in Berlin’s Mitte district.

The march followed a path of 4.6 miles through several districts toward the centrally located Brandenburg Gate.

Its aim is to celebrate LGBTQ culture, as well as campaign for equal rights and equal treatment of its people.

Berlin deputy mayor and a senator for culture and Europe, Klaus Lederer, said in an opening speech that the city must be a ‘safe haven’ for LGBTQ people facing persecution in their home countries.

‘For all the countries where being queer is still a punishable offence … Berlin must be a city of freedom,’ he said.

In a historic first, the German Bundestag and the chancellery flew rainbow flags to mark the occasion as political institutions showed their support.

Today’s parade was the first time since before the coronavirus pandemic that the annual celebration could go ahead without restrictions.

Last year, around 65,000 people attended the parade amid social distancing rules and a ban on alcohol. In 2020, the parade was cancelled entirely.

This year marks 50 years of Pride, so it seems only fitting that Metro.co.uk goes above and beyond in our ongoing LGBTQ+ support, through a wealth of content that not only celebrates all things Pride, but also share stories, take time to reflect and raises awareness for the community this Pride Month.

And we’ve got some great names on board to help us, too. From a list of famous guest editors taking over the site for a week that includes Rob Rinder, Nicola Adams, Peter Tatchell, Kimberly Hart-Simpson, John Whaite, Anna Richardson and Dr Ranj, as well as the likes of Sir Ian McKellen and Drag Race stars The Vivienne, Lawrence Chaney and Tia Kofi offering their insights.

During Pride Month, which runs from 1 – 30 June, Metro.co.uk will also be supporting Kyiv Pride, a Ukrainian charity forced to work harder than ever to protect the rights of the LGBTQ+ community during times of conflict, and youth homelessness charity AKT. To find out more about their work, and what you can do to support them, click here.