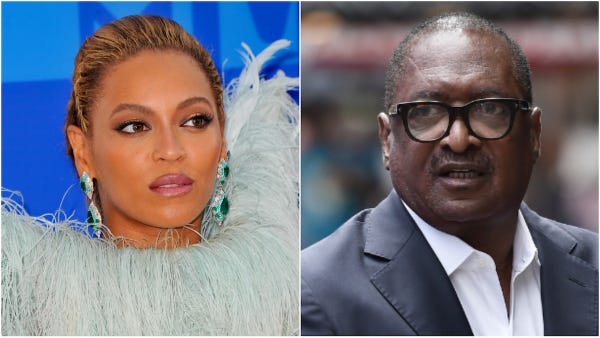 Knowles first announced his diagnosis on "Good Morning America" during last year's Breast Cancer Awareness Month. He wrote in the op-ed that on the one-year anniversary of his announcement, he wanted to share his experience to inform how other men can approach caring for their health.

"As I look back, I'm not afraid to admit I would have made drastically different choices about my health if I knew then what I know now about how we (and especially Black men) approach our health," Knowles wrote.

The music executive wrote that after he was diagnosed with Stage 1A breast cancer, he underwent a mastectomy to remove his left breast. After the surgery, he found out through a genetic test he had a BRCA2 gene mutation, which which means he is at a "higher risk for breast, prostate, and pancreatic cancers, and melanoma."

In addition to a newfound appreciation for genetic testing, Knowles wrote the term "breast cancer" should be replaced with a more inclusive term for male patients, who often face a stigma pursuing treatment with female-focused breast cancer services.

"It wasn't comforting to walk into my first oncology appointment through doors that read "Women's Breast Clinic" and to be greeted with the question, am I here for my wife?" Knowles wrote. "Since I've shared my diagnosis, countless men have secretly shared their male chest cancer diagnosis with me, as they were too ashamed to talk openly about having 'breast cancer.'"

Approximately 1% of all breast cancer cases in the US are among men, according to an estimate from the breast cancer nonprofit Susan G. Komen.

Knowles wrote that he is "grateful to say I'm cancer-free today and have the knowledge to make important lifestyle choices that hopefully keep me in remission, such as getting a mammogram every six months."

"I'm perhaps even more grateful this discovery spurred my kids to take their own medical genetic tests to learn their own risks and better inform the decisions they make — my newfound knowledge also became theirs," Knowles wrote.

As part of his work to promote medical genetic testing, Knowles tweeted about an upcoming appearance on Instagram for Invitae, a genetic testing company.

"It's foolish that so few of us take advantage of this information that's more affordable and accessible than ever," Knowles wrote. "Who doesn't want to be able to get ahead of potentially life-changing diseases or health conditions? Knowledge is power."

The new Netflix series 'Emily in Paris' is a fashion-lover's dream. Here are some of the show's most affordable finds.