BREAKING NEWS: Biden head to Brussels NATO HQ next Thursday for a summit of world leaders to show support for Ukraine after Russia sanctioned US officials and amid fears Putin may turn to nuclear weapons

President Joe Biden will go to Brussels next week to attend a special meeting of NATO leaders on Russia’s invasion of the Ukraine.

‘President Biden @POTUS comes to @NATO HQ next week to participate in an extraordinary meeting of the leaders of all #NATO Allies,’ the U.S. Mission to NATO wrote on Twitter.

White House press secretary Jen Psaki confirmed at her briefing on Tuesday that Biden would head overseas next week as Russian aggression on the Ukraine continues.

The president will ‘discuss ongoing deterrence and defense efforts in response to Russia’s unprovoked and unjustified attack on Ukraine, as well as to refer reaffirm our ironclad commitment to our NATO allies,’ she said.

‘He will also join a scheduled European Council Summit,’ she said.

She did not rule out Biden having a one-on-one meeting with Ukrainian President Volodymyr Zelensky or going to Poland to view the refugee crisis.

‘His goal is to meet in person face to face with his European counterparts and talk about necess where we are at this point in the conflict in the invasion of Ukraine by Russia,’ she said. 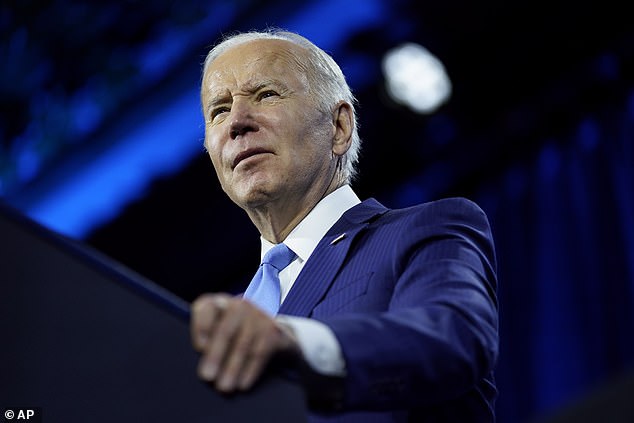 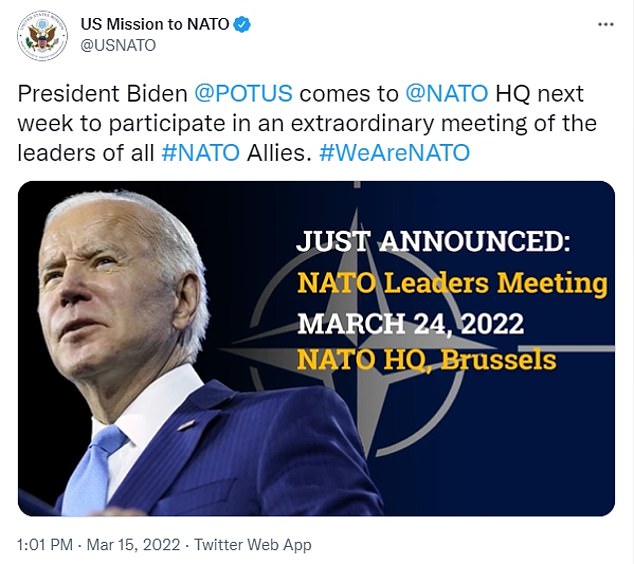 NATO secretary-general Jens Stoltenberg announced on Tuesday that he was convening the special meeting.

‘I have convened an extraordinary Summit on 24 March at #NATO HQ. We will address #Russia’s invasion of #Ukraine, our strong support for Ukraine, and further strengthening NATO’s deterrence & defence. At this critical time, North America & Europe must continue to stand together,’ he said.

Russian forces have been closing in on Kyiv as Vladimir Putin ramps up his aggression. The troops bombard areas around the capital, striking a residential buildings and a shopping mall on the western part of town. The city is under curfew.

But both sides are talking, including about a possible cease-fire, said Mikhailo Podolyak, a Ukrainian delegate to the talks.

The Biden administration has defended its work to help Ukraine, emphasizing repeatedly the humanitarian and supply assistance its provided. Officials also point out the U.S. and its allies have placed heavy economic sanctions on Putin, his inner circle, the oligarchs made billionaires through Putin’s policies and Russia’s banks.

‘He has approved and expedited the delivery of more assistance, military and security assistance to Ukraine than any year in history,’ Psaki said of Biden’s actions.

She outlined the $1.2 billion in assistance the U.S. has given. And the ombnibus funding the U.S. government includes an additional $13.6 billion in funding for the Ukraine.

Combatting, the Russian aggression is Ukrainian President Volodymyr Zelensky, who has been going a personal tour to appeal to Western nations to help his country and implement a no-fly zone over his country.

The White House has ruled out a no-fly zone, saying it would have be patrolled by American fighters who could be required to fire upon Russian aircraft, which they worry would lead to World War III. 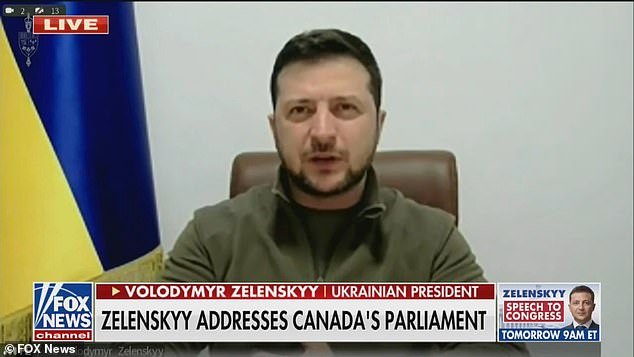 Zelensky is addressing lawmakers in Congress in a virtual address on Wednesday.

He received a standing ovation from Canadian lawmakers when he gave an emotional speech to Parliament on Tuesday.

He echoed the call he gave to London’s House of Commons last week, asking for a no-fly zone over the Ukraine.

Can you imagine when you when you call your friends – your friendly nation – and you ask please close the sky. Close the airspace, please stop the bombing, how many more cruise missiles have to fall on our cities until you make this happen,’ he said.

In his remarks to Congress on Wednesday, Zelensky is expected to ask for help in shoring up his country’s ground-based air-defense system and could make a plea for fighter jets, which the Biden administration has rejected, when he makes his video address.

Zelensky offered a possible preview of his remarks on Tuesday, in a video call to British Prime Minister Boris Johnson and representatives from Baltic and northern European countries gathered in London.

He expressed his frustration with NATO for refusing to implement a no-fly zone as Kyiv continues to come under fire.  Russian forces have  launched fresh attacks at Ukraine’s capital.

Zelensky accused NATO leaders of being ‘hypnotised’ by Russia.

‘We hear a lot of conversations about the third world war, that allegedly it could start if NATO will close the Ukrainian sky for Russian missiles and planes and, therefore, the humanitarian no-fly zone was not yet established,’ he said.

‘That allows the Russian army to bombard peaceful cities and blow up housing blocks and hospitals and schools.

‘Four multi-storey buildings in Kyiv in the early morning were bombarded, dozens of dead.’

He asked for ‘separate security guarantees’ for his country.

He also argued the tough economic sanctions the West has imposed on Vladimir Putin, his inner circle and Russian banks is not enough.

He called for a full trade embargo with Russia, for Russian navy vessels to be barred from ports around the world, and for all Russian banks excluded from the Swift financial messaging system.

The Pentagon last week rejected an offer from Poland to transfer planes to the U.S. that could then be sent to Ukraine.

In a letter to Biden, 42 Republican senators expressed their disappointment in the decision, writing that ‘we strongly disagree with the Defense Department’s decision to delay and deny Poland the option to transfer fighter jets to Ukraine.’

Some Democrats also disagreed with the administration’s position.

Meanwhile, lawmakers this week are expected to take up legislation that will strip Russia of its preferred trade status after Biden, in conjunction with G7 leaders, said the U.S. would down grade the Kremlin’s trading status.