Des Moines: Former US vice-president Joe Biden still leads the Democratic pack of presidential contenders in a poll of Iowa voters, with Bernie Sanders, Elizabeth Warren and Pete Buttigieg in a tight battle for second place.

Biden is the first choice of 24 per cent of likely Democratic caucus-goers in Iowa, the state that kicks off the presidential nominating race next February, a poll in the in Des Moines Register/CNN/Mediacom Iowa Poll. 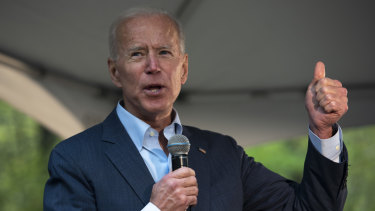 Joe Biden has held his lead in the polls as the Democrat contenders target Iowa.Credit:Bloomberg

Sanders, a US senator, is the first choice for 16 per cent of respondents, while Warren, also a US senator, and Buttigieg, the mayor of South Bend, Indiana, are at 15 per cent and 14 per cent, respectively. No other candidate managed double- digits.

US senator Kamala Harris registered 7 per cent, and US senator Amy Klobuchar and former Texas Congressman Beto O'Rourke are both at 2 per cent. Seven candidates registered 1 per cent.

More than 20 Democrats are vying for the right to challenge Republican President Donald Trump, who will formally launch his re-election bid on June 18. Biden has been the consistent leader in most national and state polls since he first entered the race in late April. Sanders runs second to Biden in most polls.

As campaigning accelerates leading up to the first debates later this month, 19 of the 23 Democrats actively running to challenge President Donald Trump will be in the state, the biggest assembly of 2020 candidates to date.

The marquee event is the Iowa Democratic Party Hall of Fame dinner on Sunday, where they'll be making five-minute pitches to influential local party officials. Missing from the group is front-runner Biden, who is waiting until Tuesday to campaign in Iowa.

The dinner will let each candidate showcase the support and infrastructure they've built in Iowa, where caucuses in February launch the months-long, 50-state series of contests leading to the party's nomination. Since the beginning of the year, hopefuls have collectively visited Iowa about 200 times, according to data compiled by Bloomberg.

"All these folks want to have the chance of trying to create favourable optics," said Dennis Goldford, professor of political science at Drake University. "How can they best use the enthusiasm of their supporters to propel them to be the focus of attention?"

The next big milestones in the campaign will be the South Carolina Democratic weekend on June 21 and 22, when 20 candidates, including Biden, are set to appear at a fish fry, and two nights of debates in Miami on June 26 and 27.

"While there's seven months left until the caucuses, you only get so many of these opportunities to make Iowa Democrats feel important," said Joshua Darr, a political science professor at Louisiana State University.