Los Angeles (Reuters) – President Biden on Wednesday blamed the lack of any progress on gun safety on intimidation by the gun lobby, and he called on voters to make it a deciding issue come November during his first in-person appearance on a late-night talk show.

Biden told late-night host Jimmy Kimmel that the National Rifle Association has bullied Republicans into thinking that “if they vote for rational gun policy, they’re going to be primaried.”

Biden said he is considering additional executive orders, but doesn’t want to emulate his predecessor’s use of the non-legislative strategy, calling it an “abuse of the constitution.”

The appearance on “Jimmy Kimmel Live!” on ABC with a late-night host who has discussed weighty issues such as U.S. healthcare and the mass shooting crisis gave Biden an opportunity to humanize himself with voters and get his message across to millions.

Biden has been frustrated by his poor poll ratings amid concerns about high gas and energy prices, baby formula shortages, and lack of progress on several legislative fronts like voting rights and abortion rights, as well as gun safety. His advisers are hoping to retool their messaging in the upcoming weeks, hoping to focus on the positive elements of the economy, such as job and wage growth.

“Inflation is the bane of our existence,” Biden said.

He criticized U.S. oil major Exxon Mobil for making fat profits but not drilling new wells or refining more gasoline and instead buying back its own stock. 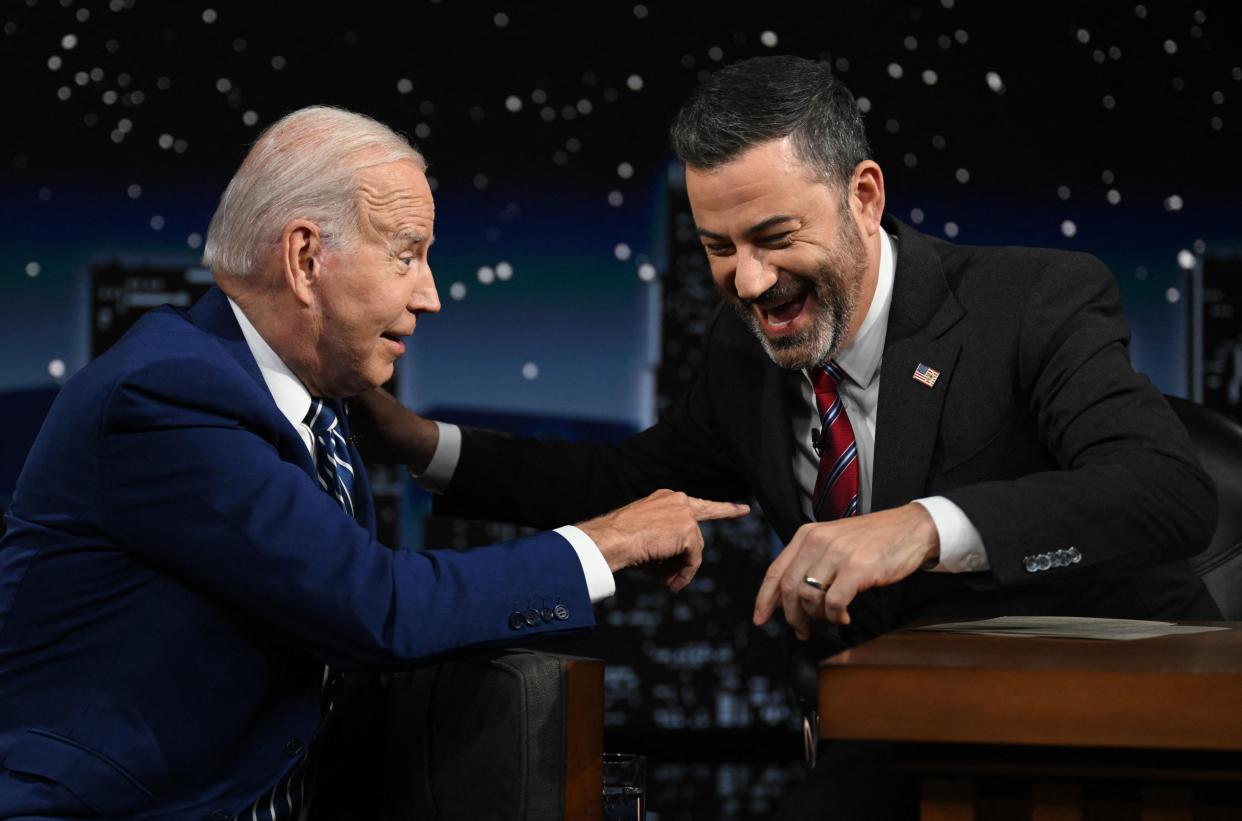 Kimmel lightly chided Biden for his continued optimism amid limited progress on his legislative agenda issues, and said how can you play “Monopoly” by the rules with his rival Republicans who don’t.

Biden smiled and joked: “We’ve got to send them to jail,” a reference to a punishment in the board game.

While former President Donald Trump was absent on late-night television as president, Barack Obama was a regular presence on the shows during his time in office.

Kimmel started his career as a raunchy host of Comedy Central’s “The Man Show” before becoming host of his own late-night show. Kimmel has not been shy about using his platform to address social issues with a personal bent.

He passionately spoke about the healthcare debate following the birth of his son, who was born with a serious heart issue. Kimmel also broke down in tears after the 2017 mass shooting in Las Vegas, his hometown, which ultimately killed 60 people.