Black Lives Matter UK to announce how it will spend £1million

Black Lives Matter UK to announce how it will spend £1million of crowdfunded donations – as it is revealed Met Police spent £1.5million policing the group’s protests

Black Lives Matter UK is to announce on Tuesday how it will spend the £1 million it has received in donations.

A GoFundMe crowdfunding campaign started by the activist group on June 2 has attracted more than 35,000 donations totalling £1.17 million.

But BLM UK has revealed GoFund-Me is holding on to the money until it explains how it will be distributed. 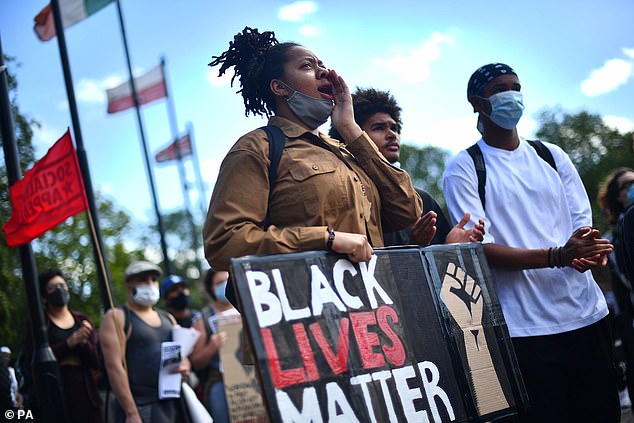 Pictured: People at an All BLack Lives UK protest at Marble Arch, London, on July 5 this year

The group has been criticised for a far-Left policy agenda, which includes tearing down capitalism and abolishing the police, and its lack of transparency.

Beyond founding member Joshua Virasami, 30, little is known of the identities of its ‘core’ leadership.

In a statement posted on its fundraising page on July 10, BLM UK announced it was ‘working with organisational and legal experts to create the most appropriate and ethical structure for holding and distributing much of these generous funds’, adding it hoped to ‘get the money out sooner rather than later’.

The group said it planned to have its website up and running by Tuesday, August 4, to mark the four-year anniversary of its founding. It is also the anniversary of Mark Duggan’s death, whose killing by police in 2011 sparked the London riots.

Meanwhile, The Mail on Sunday can reveal the Metropolitan Police spent £1.5 million policing the Black Lives Matter and counter protests on the weekend of June 13 and 14.

The largely peaceful BLM demonstration was met by a mob of far-Right extremists who pelted police with bottles, barriers and fireworks.

The rally was billed as an effort to defend historical monuments after the defacing of Winston Churchill’s statue the weekend before. However, it was hijacked by far-Right thugs and Home Secretary Priti Patel condemned the scenes as ‘unacceptable thuggery’.

Boris Johnson added: ‘Racist thuggery has no place on our streets. Anyone attacking the police will be met with the full force of the law.’

One of the counter-protesters was photographed urinating on the memorial to PC Keith Palmer, who was killed in the Westminster terror attack in 2017. Andrew Banks, 28, was jailed for 14 days after pleading guilty to outraging public decency at Westminster Magistrates’ Court.

At the time of the protests, Met Commander Bas Javid said police had made the right decision to allow demonstrators to gather in Central London despite the lockdown and fears of violent clashes.

He said: ‘The assessment made was that the best tactic was to cater for an assembly and the best way to do that is to put conditions in place.

‘Having an element of control is the best and safest way to manage that, not just for the public but for the people who are demonstrating and police officers.’